Ancient Greece was divided into many different areas, called city-states. There were many city-states throughout the entire country, and each one had its own government. Athens and Sparta were two of the most powerful city-states in Greece. Sparta was governed by the military, while Athens had a democratic government. Over time, people’s opinions about what made a good government changed, and various types of governments developed as well.

This is a sequence of Greek governments that were defined by Aristotle: monarchies, oligarchies, tyrannies, and democracies.

Don't use plagiarized sources. Get your custom essay on
“ The Ancient Greek Government ”
Get custom paper
NEW! smart matching with writer

Many places in Greece began with these government systems, from monarchies to oligarchies, to tyrannies, and finally to democracies. However, there were plenty of areas that were using different systems, resulting with many city-states that never did become democracies or tyrannies at all.

In the beginning, Athens was governed by a monarchy, rule by one person. Soldiers handpicked their leader and put him into power. However, monarchy did not last long in Athens, as a new government system soon developed in 800BC.

This system was called the oligarchy, meaning “ruled by the few”.

During the period of 600 to 500 BC, rulers who took power to lead an unjust government were often accused as tyrants. Yet at around 510BC, the first democratic government began sprouting its roots in Athens, soon leading many other Greek city-states to imitate the system. Greece had established one of the first democracies ever!

What did the word “democracy” mean to the Greeks? It meant, “Power of the people,” that everyone was given say in government.

Eventually, even city-states that weren’t Greek, such as Carthage and Rome, tried to give everyone the power to participate in government, especially the poor people. In Greece, all male citizens who were at least the age of eighteen were qualified as council members, judges or government officials. However, all three of these jobs lasted only a year, and at that time, not one person was paid for their services. Although the Greeks attempted to establish a well-run democratic program, they had their problems. Athenian democracy did not really give power to everyone.

Most Athenians were not qualified to vote – no women, no children, no slaves, and no foreigners. None of the citizens living in any other city-state were allowed to vote, either. As a result, many Greek city-states were governed under the oligarchic government, tyrannies, and monarchies throughout the whole time. Although the Greeks established an imperfect system of government, it eventually became very important over time, and is still significant in our society today.

Democracy is very important because it gives everyone a voice in their government, meaning that everyone has a say and is treated fairly. In a democracy, anyone can be involved in running a country, but in a monarchy, a bad leader could very likely influence the country into making incorrect decisions and taking wrong actions. Instead of one person’s opinion, the Greeks had begun a way of government that involved many voices.

What is most significant about the ancient Greek government? It is important to remember that of all the things invented by the Greeks, the system of democracy was Greece’s best idea of all. Thanks to the Greeks, democracy is still used in many countries throughout the modern world. 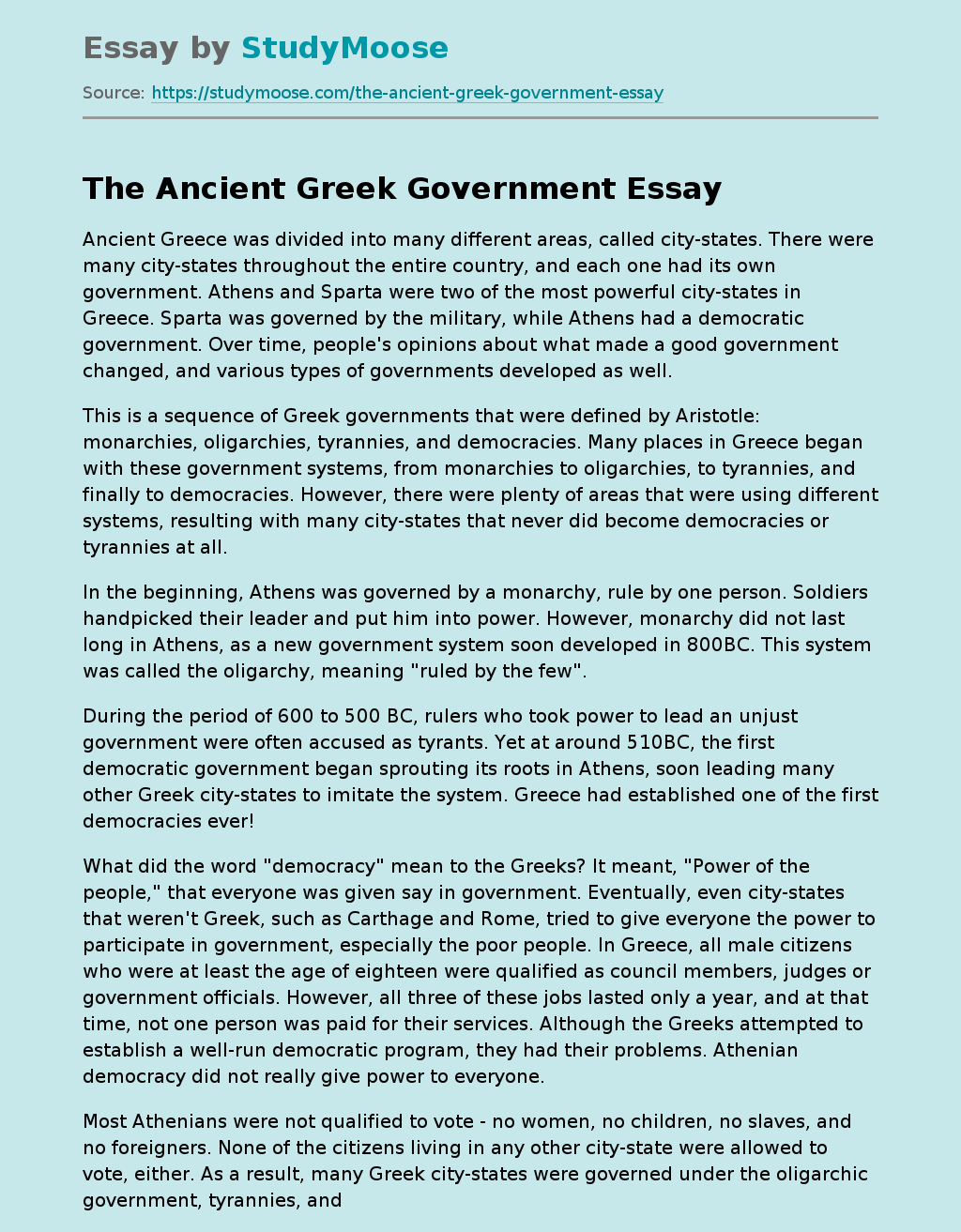