The American Dream Not Reality

Fitzgerald uses figurative language to show the American Dream’s undesirability. In the end, it does not make one happy. Daisy, who has the American Dream, shows the unhappy when Nick reflects on “what a grotesque thing a rose is”  .

Don't use plagiarized sources. Get your custom essay on
“ The American Dream Not Reality ”
Get custom paper
NEW! smart matching with writer

The petals of the rose embody the American Dream, while reality represents the stem with its thorns. It attracts people with its alluring facade, only to shock them with the experiences of reality. The rose also represents Daisy because she seems blithe and unknowing on the outside, but she understands everything and harbors unhappiness within her. She puts on a disguise to fit in with society. Although she lives the American Dream with a rich husband, lavish possessions, and a beautiful house, these things do not bring joy to her life.

Tangible objects cannot replace things like friendship or the feeling of love. These material possessions just create feigned happiness and cause more discontent. From observing the other characters, Nick realizes that the American Dream isn’t worthwhile, “so we beat on, boats against the current, borne back ceaselessly into the past” .

Throughout history, people have used boats to search for and arrive at a new life. Boats represent the “dreamers” like Gatsby, Myrtle, and Wilson, who strive for the American Dream and trying to make a new life for themselves.

The current prevents them from reaching their dreams. If a current blocks someone from getting to their destination, they will never overpower the current. This shows that no matter how hard one tries to achieve the American Dream, they will never overcome all the obstacles. When Fitzgerald says, “borne back ceaselessly into the past”, this means that no one can escape from their past. Even though Gatsby has everything, the people of East Egg still do not accept him. Myrtle can wear all the fancy and expensive clothes in the world, yet the “elite” do not embrace her as one of their own. Despite all their efforts, they cannot change their status. They spend their whole lives chasing an unattainable dream that does not ensure happiness.

Fitzgerald’s use of colors shows the problematic nature of the American Dream. Green represents greed and envy. Gatsby shows his greed because he yearns for the unattainable. He always wants more. He keeps forcing Daisy to tell Tom that she never loved him, until she says “Oh, want too much!”. He would not just let her alone. Gatsby wanted even more from her. The American Dream causes people to focus only on themselves, creating a vicious cycle of them trying to get what they want. Green also represents jealousy. At first, Gatsby shows jealousy to Tom because he has the only thing Gatsby does not, the girl of his dreams. Of course, Gatsby has lots of money and a beautiful house, with “period bedrooms swathed in rose and lavender silk”, but his envy of Tom lingers. He desperately wants what Tom has, and he will not settle for any other girl. He devotes his whole life to Daisy because Jordan says, “‘Gatsby bought that house so Daisy would be just across the bay”. He also dedicates his entire life to pursuing the American Dream. He even involves himself in illegal businesses to gain more wealth for himself: “I was in the drug business and then I was in the oil business” .

This shows the great lengths that greed and jealousy can drive people to achieve the American Dream. Yellow represents happiness, but also deceit and corruption, while white reflects goodness, pureness, and innocence. Both these colors represent Daisy, as “the golden girl” who “dressed in white, and had a little white roadster”.  Her name, Daisy, signifies a flower that has white petals and a yellow center. Though she appears pure and innocent on the outside, she reflects deceit and corruption. Gatsby confirms Daisy’s value of wealth and materialism by describing her voice as “full of money”. These colors, green and yellow, show that pursuing the American Dream has adverse effects, including greed, jealousy, and corruption.

The American Dream Not Reality. (2021, Apr 22). Retrieved from https://studymoose.com/the-american-dream-not-reality-2-essay 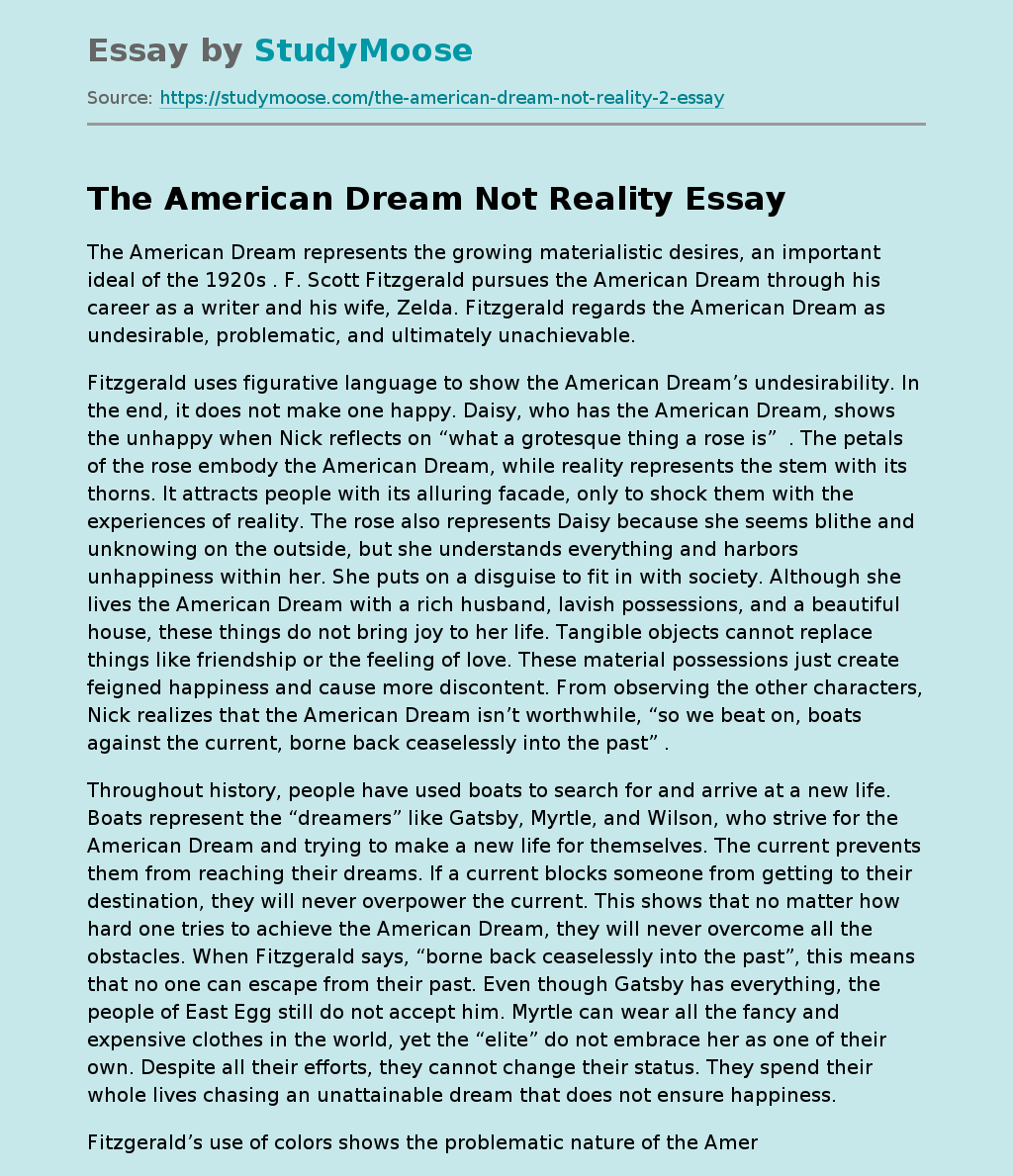