"The Adventures of Huckleberry Finn" by Mark Twain: Huck vs Society

This paper discusses “The Adventures of Huckleberry Finn” by Mark Twain with emphasis on the theme of the character Huck Finn’s relationship to society.

Don't use plagiarized sources. Get your custom essay on
“ “The Adventures of Huckleberry Finn” by Mark Twain: Huck vs Society ”
Get custom paper
NEW! smart matching with writer

I’ve been there before.” Huck decides to choose against society because of all the harsh realities that he has seen first hand. Huck’s early doubts of the civilized world all started with Pap. During most of his childhood, Huck had been abused both physically and mentally by his redneck guardian Pap. This man had walked into and out of Huck’s life on numerous occasions.

He was the only father figure in Huck’s life and failed miserably at the job. Pap was the first representation of civilization to Huck and it was a sour one. It was also civilization that awarded custody of Huck to Pap. He had been screwed over too many times by the civilized world, and that was the main reason he decided to leave home. Huck ran from his troubles at home down the Mississippi River. The river is where he found his sanctuary. Jim and Huck were always safe, independent, and free out on the raft.

It seemed that every time they would go to shore, something negative involving civilization would arise. The dark side of human nature and suffering would meet up with the two of them. They always stumbled upon the under-belly of society. The symbol of human suffering was the Grangerfords family. When Huck found himself in front of their farm after the ship wreck, his first impression was a positive one. He thought that the Grangerfords were a pleasant, normal family. However the dark secrets that existed within the family could make skin crawl. The paintings and writings made by Emmeline Grangerford, who died when she was fourteen, are of rather morbid subjects. She was a messed up child that came from a bizarre, disturbed family. They had a feudal war going with another family where constant deaths and suffering took place. Just before Huck leaves, his age equivalent and friend Buck, gets shot in cold blood. Just another exemplary performance of this so-called civilization that Huck is supposed to return to. The king and duke however were the icing on the cake. They represented the greed and fraud that Huck especially hates about society. From the moment that Huck and Jim met up with the king and duke, the voyage took a turn for the worse. These two con-men were not only thieves and murderers, but they also ended up selling Jim as a runaway slave. After that, the two tried to swindle a couple of innocent girls out of their family fortune. This hanase act is what made Huck feel the worst about people in general. The quote “It was enough to make a body ashamed of the human race,” (162) showed that Huck was embarrassed to be a human. He could never go back to a civilization which he had no respect for. According to Huck, the morals of society were up the creek. Huckleberry Finn was dealt a raw deal in life. It started with his abusive father Pap. Stability is the most important aspect of childhood and Huck didn’t have that. Pap kept leaving and coming back into his life and even went as low as to attempt to take Huck’s money. He decides to run away and make his voyage down the river. Every time that they go to shore, some reject of civilization is who they would run into. Aunt Sally wants him to come back with her and civilize him, but based on his experiences, Huck just can’t let that happen. He needs to roam free. The only thing that Pap was never able to steal from his son was his imagination. He needs to be able to think freely and to explore. Huck wants his youth and innocence and he feels that civilization would take that away from him.

"The Adventures of Huckleberry Finn" by Mark Twain: Huck vs Society. (2020, Jun 02). Retrieved from https://studymoose.com/the-adventures-of-huckleberry-finn-by-mark-twain-huck-vs-society-essay 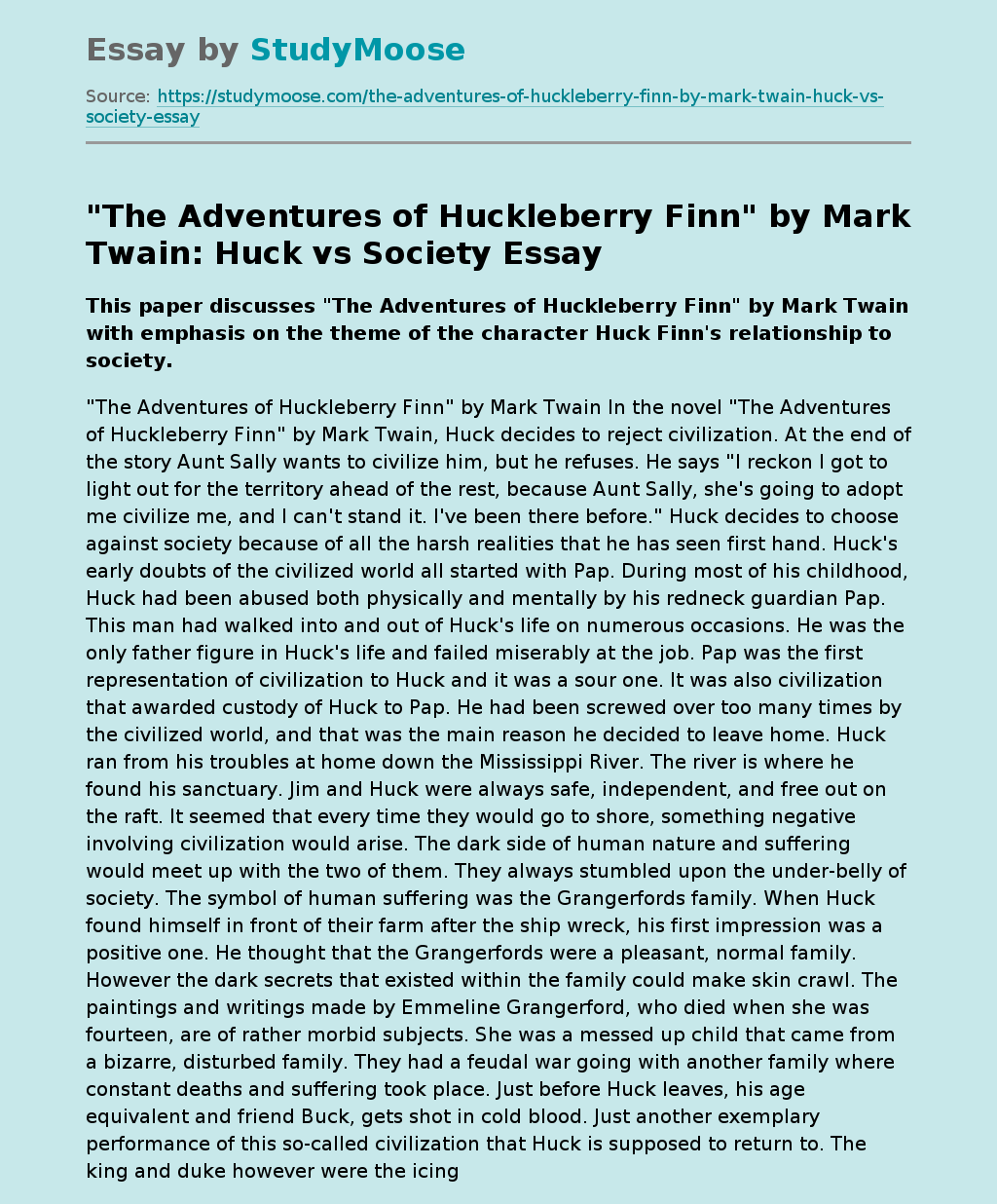