The primary source I chose to research is The Act of Supremacy (1534). This was an act passed by the English Parliament establishing the English monarch, which at the time was Henry Tudor VIII, as the head of state and religious head of the Church of England. Although there is always some glamorization in the writing and depiction of historically based movies, I enjoyed both “The Other Boleyn Girl” and the cable series “The Tudors”. I found Henry VIII quite interesting, twisting both law and religion to suit his particular wants.

The ideas for The Act of Supremacy document, I assume, would have been from King Henry VIII but was written by Lord Thomas Cromwell to be made into legislation by the English Parliament. Lord Cromwell was the chief minister to Henry VIII from 1532 until 1540. Lord Cromwell was not born into nobility and did not share the traditional views as the rest of the king’s noble advisors did. He wanted to end feudal privilege which was “…a social and economic system defined by the inherited social ranks, each of which possessed inherent social and economic privileges and obligations.

” (http://www.usna.edu/Users/history/abels/hh315/Feudal.htm) Lord Cromwell was a Lutheran Reformist and wanted England to break its ties with the Papacy. He believed in the teachings of Martin Luther whose theology taught that the bible was the only source of divine knowledge revealed from God and that any man capable of reading the bible could ascertain this knowledge – without the church or priest.

He taught that all baptized Christians were priesthood holders and did not require a priest’s intervention to pray to God, which was in direct violation of the Pope and Roman Catholic Church. Lord Cromwell’s want for reform and separation from the Papacy fueled his advisement to the king. As we learned, during the early Middle Ages, the monarch was the sovereign leader of his/her kingdom. When the Papacy gained more power than the monarchs during the High Middle Ages, King Henry, along with Lord Cromwell and other advisors, believed this was a violation of the king’s sovereignty and wanted to return to the time when the monarch had no rival rule within the kingdom. Initially, Lord Cromwell ordered “Valor Ecclesiasticus” which was a reporting of all of the finances of all the Catholic churches in England, Wales and English controlled Ireland. This reporting provided the King and his advisors a clear depiction of the wealth of the Catholic churches. Because of Henry VIII’s lavish lifestyle and his need for military glory, his inheritance quickly diminished.

The king’s advisors, including Lord Cromwell, convinced the king to remove all the wealth and property from the monasteries, priories, convents and friaries and refill the king’s coffers, since that wealth would have been redistributed to the Vatican, or so these advisors wanted Henry VIII to believe. With this new information, Lord Cromwell ordered dissolution of the monasteries, priories, convents and friaries. The monasteries were dissolved then closed or forced to pay financial homage to Henry VIII. This document was written in the 16th century in November of 1534. Around this time, the king wished for the Pope to annul his marriage to Catherine of Aragon so that he could marry Anne Boleyn. The king believed that mere pressure on the Pope would provide the desired effects.

Catherine of Aragon was previously the wife to the king’s older brother, Prince Authur who died in 1501. She later married Henry in 1509. The king used the fact that Catherine was unable to produce sons as heirs and too old to do so, in order to ask for the annulment in hopes to marry his current love interest, Anne Boleyn. Pope Clement VII refused this request on both ideology and out of fear. “Catherine of Aragon was the aunt of the Emperor Charles V of Spain (the Holy Roman Emperor) whose army surrounded Rome.” (http://www.durhamworldheritagesite.com/history/reformation) Lord Cromwell never fully believed in the king’s desire for reformation or separation from the Papacy, however, he knew that the king fully desired this annulment. Lord Cromwell used that information to his benefit, knowing that the Pope’s refusal to grant the annulment would turn the king against the Roman Catholic Church.

The Act of Supremacy not only made Henry VIII both head of state and church but it broke ties between England and the Papacy. The Act of Supremacy was a more political dispute than theological. Prior to England’s break from the Papacy, the Roman Catholic Church had the power to create laws imposed on England and governed by Canon Law. Canon Law was “…ecclesiastical law, esp. (in the Roman Catholic Church) that laid down by papal pronouncements.” (http://www.thefreedictionary.com/canon+law) Also, the Catholic church was able to collect revenue from their parishioners which were then sent to the Papacy. With the creation of this Act, England revoked the Papacy’s power and declared the king head of both England and it’s church. “Albeit the king’s Majesty justly and rightfully is and ought to be the supreme head of the Church of England… by authority of this present Parliament, that the king, our sovereign lord, his heirs and successors, kings of this realm, shall be… the only supreme head…of the Church of England…and united to the imperial crown of this realm…” (http://www.thenagain.info/Classes/Sources/ActSupremacy.html)

During the 16th century, the Act of Supremacy impacted both Papal powers and the English citizens. For the citizens of England, it was now an act of treason to show any support to the Papacy, which was punishable by removal of all property or in some cases, death. Over 400 people were executed for not swearing allegiance to the Act of Supremacy. It also halted all monetary collections to the Papacy. Former powers of the Papacy were now revoked and granted to either the king or the clergy leaders of the Church of England. The powers to grant dispensations, which are exemptions from Canon Law, were now given to the Archbishop of Canterbury. The king now appointed the higher-level church dignitaries, like bishops. The immunity provided to members of the holy order by the Papacy was now revoked.

These benefits once provided to the clergy were remnants of Papal supreme authority. “By removing the legal authority of the Pope in England and Wales, Henry was broadening his own power within his own realm.” (http://www.historylearningsite.co.uk/royal_supremacy.htm) The present day effects of the English spilt from the Papacy led to England becoming and remaining a majority Protestant country. It ushered in a theology that didn’t require the church’s intervention to enter heaven, receive salvation, or speak to God. Also, with the removal of Papal authority, the Roman Catholic Church Canon Laws, and immunity provided to clergy, Parliament and state powers were now more centralized. No longer did the clergyman play any major roles in politics. With the dissolution of monasteries, the House of Lords had a majority of layman and the Lord Chancellor was no longer a member of the clergy. 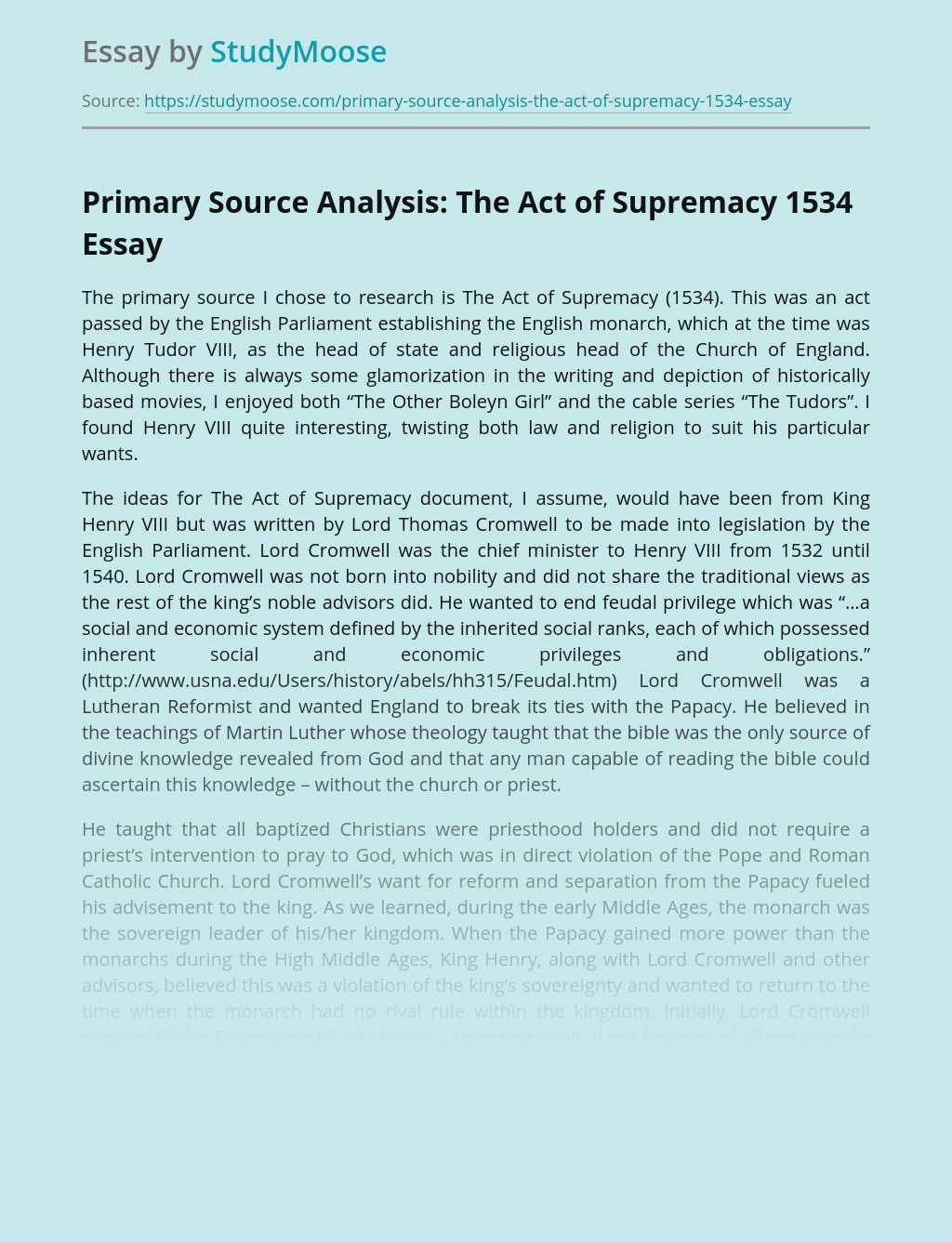 The Pilgrimage of Grace

The Pilgrimage of Grace was a religious uprising in York, England which started in late 1536 and finished in early 1537, where people lead by Yorkshire lawyer Robert Aske staged protests and demonstrations in opposition to King Henry VIII’s dissolution of monasteries and break from the Catholic Church. This rebellion was mostly aimed at Thomas...

As the crusades started, Christians collected to hear the insightful speech given by Pope Urban II in which he was able take unruly knights and offer them a typical opponent to combat. The opponents were the Muslims and Turks who were assaulting the Byzantine Empire and the Holy Land. Urban II’s speech offered insights to...

Get Essay
Reigh by Elizabeth I

Persona and Deeds of Napoleon Bonaparte

Napoleon was nothing more than a tyrant as he exploited France in pursuit of his own ambitions to achieve a dynasty in his name. A dictatorship is often associated with repression and the workings of a police state. Both of these were, in fact, being used in France. For example Napoleon vigorously censored the press...

Sir Robert Peel established the nine principles of law enforcement also known as the Peelian Principles in 1892 under the base of patrol functions defined as deterring crime, enhancing the feeling of public safety, and making law enforcement officers available for service. Police departments today use these nine principles as a foundation of maintaining positive...

Colonial Differences from North to South

During the 1700’s, many colonies began to show their true differences with one another. Although the colonies were settled by English origin only, the regions became two distinct societies within years. Of the colonies, the Chesapeake and the New England region were strongly diverse. The Chesapeake and the New England regions differed in the 1700’s...

Elizabeth's Intervention in Scotland Between 1559-1560

Elizabeth was by no means the first monarch to have problems with Scotland but her intervention differed from other cases namely because of the involvement of France in Scottish affairs. This brought into play a unique set of motives for intervening, the biggest one being a fear of French power north of the border spilling...