Bruce Dawe, an Australian poet composed many of his poems focusing on entertaining as well as portraying the ‘common man’. His poetry presents and examines his dislike of authority, politicians, commercialism and consumerism and expresses concepts of modern and realistic themes. “Televistas”, composed by Dawe in the 1960’s entails the story of two personas that fall in love and develop their relationship in front of a recurring motif, a television. The poem dramatizes how human interaction and qualities of loving and communication are being converted and completely forgotten due to extensive technological advancements through the dominance of the personas’ consumption of television.

Don't use plagiarized sources. Get your custom essay on
“ ‘Televistas’ Analytical Paragraph ”
Get custom paper
NEW! smart matching with writer

Dawe embellishes on the fact that the values of relationships through human interaction and communication has been depraved as a conclusion to vast technological influences on psychological and physical aspects to human life, thus resulting in the dehumanization of humanly ethics and morals. Commencing with a flirtatious tone in the first stanza, the poem gradually develops into that of an infantile and ‘loving’ tone.

However, these light-hearted tones are followed by a serious and disturbing tone, implemented in order to convey the composer’s didactic purpose on the prominence and influence of television in society.

The poem is written in 7 stanzas with 4 lines each. A persistent rhyme is encountered in lines 2 and 4 of each stanza which allows this poem to develop as a flow of thought. The rhyming scheme also brings about the comparison of T.V. programs to various aspects of human relationships- “… first falling out …fancied Twits and Shout; …futures planned …The Mummy’s Hand”- and thus promotes a disconcerting tone to the poem.

Through use of satire and television jargon, responders are able to understand the psychological and emotional dominance of television as the personas mocked for not having genuine emotional experiences by comparing stages of their relationship to television programs. By implementing “Etcetera” in the climax of the poem, Dawe establishes his opinion that love holds no value and that it is relevant in a relationship as a result of the influence of television. Bruce Dawe’s “Televistas” discusses the impact that television, media, and technology has on society and the manner in which it has dehumanized humanly values and relationships. 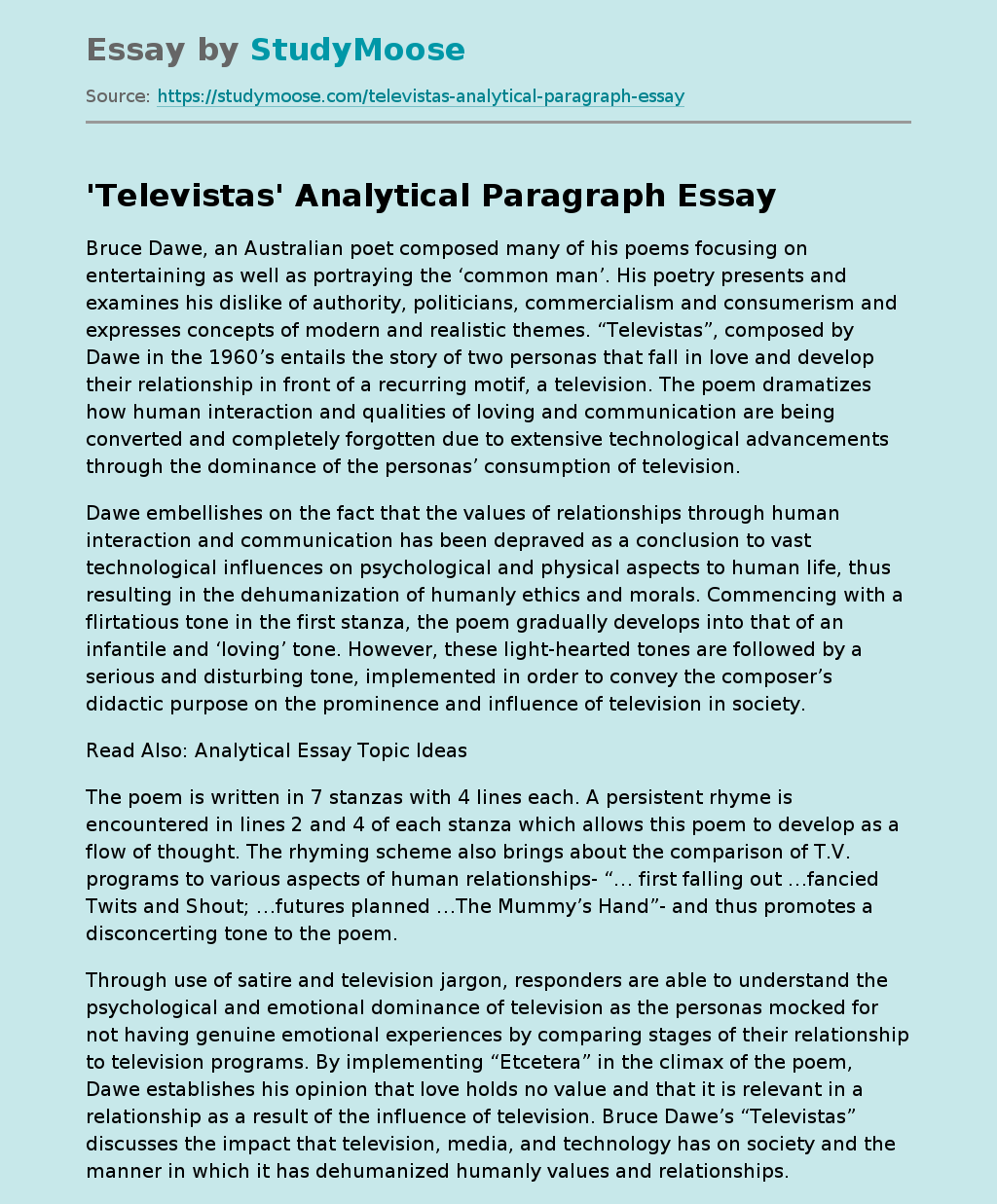