Technology is becoming used excessively every day. Kids spend all their time on their phone or playing video games. With new innovations coming out every week, people want to be the first to own the “new thing”. There should be one hour a day where one has to participate in activities that do not involve technology to prevent obesity. I believe all the new inventions contribute to the world’s obesity problems. Most people thought obesity was due to the advent of “super-sized” fast food but new research places the blame squarely on a double dose of innovation Adults and kids alike spend numerous amount of time sitting down to watch television or looking up interesting subjects on the computer.

Don't use plagiarized sources.
Get Your Custom Essay on ﻿Technology leading to Obesity Just from $13,9/Page

Researchers now suggest that 60 percent of the extra pounds Americans have put on maybe caused by a decline in the physical demands of work brought about by the arrival of computers and the like.

All this time spent sitting and not being physically active is harmful to one’s health.

Since new ideas are made each day, why hasn’t someone invented something that stimulates the mind as well as keeps the body in shape? Both adults and children are leading increasingly sedentary lifestyles thanks to modern technology. Children no longer need to go outside to talk to their friends when they can keep up with them through texting or social networks. They do not even need to go outside to play games anymore when they have video games right there at their fingertips. Technology may be convenient, but it must be balanced with physical activity in order to keep both ourselves and our children healthy. In past decades, strenuous jobs meant that workers were in effect paid to exercise. Now workers with more sedentary jobs pay to exercise at the gym. It is this lack of exercise, rather than an increase in calories, that has led to the weight gain, they say, which is no longer music to the ears of the US fast-food companies as they are now facing lawsuits from some litigious fatties.

Research has shown that an average 6ft-tall man today weighs 30 pounds more than he did in the early 1900’s. Some parents have been relying on technology as “electric babysitters” including the television and computer. Parents know where their child is if they are watching television or sitting in front of the computer screen. It is the parents duty to incorporate activities that involve exercise if they want to use these methods including Wii fit, or Dance Dance Revolution. Kids may also get the feeling that it is alright to watch television all day or continuously play on the computer if they see their parent doing likewise. Just a few small changes can make the difference between bad habits that are likely to lead to obesity, and good habits that they will carry with them for life.

Parents must remember that our children are our future, and as such, they have the responsibility to teach them good habits to carry with them all their lives. The government should pass a law where a time period each day is not used on technology, or if it is, used in way to where you are exercising. This could give people time to work out or do something productive with their life. Instead of bragging about making it to level 30 on zombies, kids could say they learned the difference from a poisonous plant and an edible plant. People today are becoming too lazy and reliant on technology.

﻿Technology leading to Obesity. (2016, May 03). Retrieved from https://studymoose.com/technology-leading-to-obesity-essay 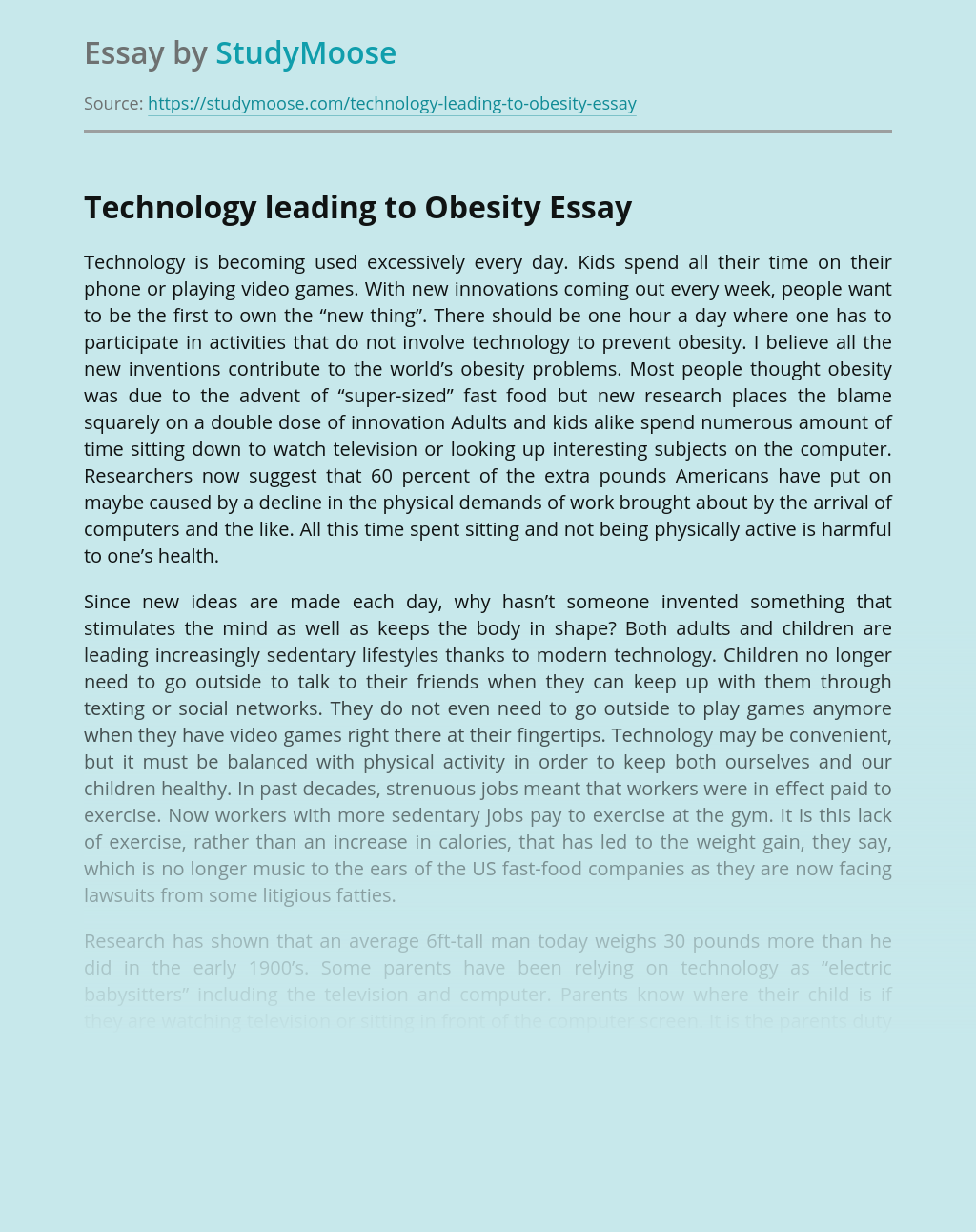 Rate this post “Sports do not build character. They reveal it,” said John Wooden, legendary UCLA basketball coach. Playing sports not only provides physical activity, but also other positive benefits. This is especially true for children. A well-structured and organized youth program will provide benefits and positive experiences for young athletes. While children are having...

Get Essay
Physical Exercise and Sports

Rate this post Sports are very important, not only to kids, but for adults as well. When you play sports you meet so many people you probably wouldn’t if you didn’t play. You get to know people that enjoy playing the same sport you do. Sports aren’t only fun, they keep you in shape. You...

Rate this post Are Environmental Factors the Main Reasons for Obesity Epidemic? In her essay” What’s to Blame for the Surge in Super-Size Americans? ” Tori DeAngelis discusses the various factors that lead to obesity. DeAngelis reminds us that obesity is getting worse and worse by the day. According to the current government estimate, about...

Rate this post Being dynamic has been appeared to have different therapeutic central focuses both physically and ordinarily. it might significantly enable you to live more. Increasingly euphoric lifeExercise has been appeared to improve your identity and lessening suppositions of wretchedness fear and stress. it produces changes in the bits of the cerebrum that supervise...

Rate this post Literature review: The study took place at university of Malaysia (UITM) indicates that the staff employed were causing influenza, stress, headaches who were inactively participating in any of the physical activity. The university held an activity of SAF games to engage its staff to participate in the sports events. Among 5000 staff...

Importance of Physical Education in Schools