1.How does Target’s business model differ for that of Wal-Mart? Wal-Mart’s business model is centered around providing a widespread of products at “always low prices.” Wal-Mart has chosen to have “greeters” at each of their store entrances. It is an industry practice for retailers to charge a slotting price for their items to be seen on store shelves, but Wal-Mart is one of a few retailers who do not. Their main focus is to sell popular products and to drop products that are no longer selling.

Don't use plagiarized sources.
Get Your Custom Essay on Target’s Business Model Just from $13,9/Page

Also, Wal-Mart has built their chain in over 15 different countries which accounts for 24.2% of its total net revenues. Whereas, Target Corporation’s business model is the “expected more pay less” philosophy. Target wanted to give everyday customers, with a wide range of wages, the unique designer label products in conjunction with traditional retail store items in a clean upscale atmosphere. Target also wanted to offer good customer service, management that is business savvy, and be capable of adjusting to changing times.

Also, by Target introducing credit cards it caused an increase of store visits by customers which in turn caused as increase in sales.

2.How are these model differences reflected in Target’s and Wal-Mart’s financial performance? How would you evaluate Target’s relative financial performance to Wal-Mart? What are the key metrics most useful to understanding their relative performance? In 2008, Target was unable to surpass Wal-Mart’s same-store sales. With sales at its core retail business wavering and bad-debt write-offs growing with their credit card, Target was unable to provide the same sales throughout the year. Comparing the debt-to-equity ratios will show how much debt is used to finance operations which could cause the company to produce more revenue than it could have without the debt. The debt-to-equity ratios in 2008 for Target and Wal-Mart were 1.12 and .69, respectively. A high debt-to-equity ratio, like Target, indicates that it was very aggressive in financing its growth through debt. This results in very volatile earnings which can lead to bankruptcy.

Having a low debt-to-equity ratio, like Wal-Mart, indicates moderate financing through debt and low risks. These results reduced the likelihood of large losses or large return of earnings. The best way to compare the profitability of companies within the same industry such as, Target vs. Wal-Mart, is by using ROE (Return on Equity). ROE shows how much profit a company produces with the money that is invested by shareholders. The ROE in 2008 for Target and Wal-Mart was 14.5% and 20.7%, respectively. Having an ROE between 15% and 20% is believed to be desired. This shows how well Wal-Mart was able to use its investment funds to produce earnings compared to Target.

3.Do you think Ackman’s demand for changes at Target are justified, given target’s strategy and its financial track record? No, Ackman’s demand for changes are not justified. Although Target is decreasing in most major categories, most of its competitors are experiencing the same decline. When the economy was strong, Target was doing very well with its stock rising since 2003. The economy hit Target harder than Wal-Mart because Target is known for high end products and customers were no longer willing higher prices for items causing customers to search other stores for lower prices. It was not unexpected once the economy went down for Target to have trouble. With Targets track record and the economy troubles the demand for the changes were not justified.

In 2008, credit card profits were down considerably from the previous year but it did account for $2 billion in revenue. Target should accept the option to sell the credit card business because in 2009 its bad debt was 14.2% which was up from 8% from the previous year. Target owned 85% of its stores that could be sold for $28 billion which Ackman wanted to use this money to buy back shares. This could cause Target to obtain approximately 60% of its outstanding shares which would increase EPS (Earnings Per Share) and the company’s stock price. 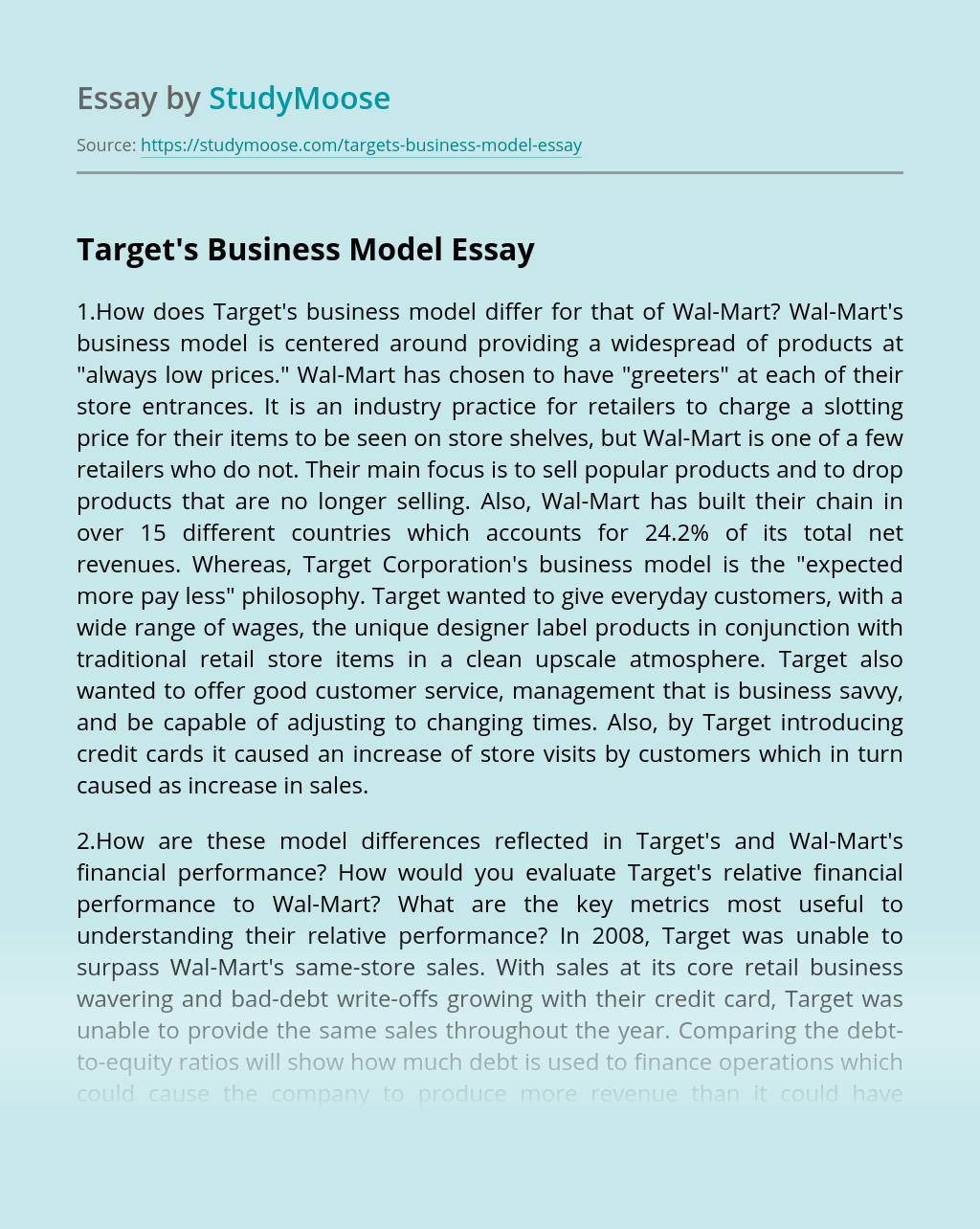 Basement Ink tattoo and laser removal, will open a small tattoo parlor in suburbs of Chicago, Tinley Park IL, where both people looking for their first tattoo or people that wish to switch to a new artist will have a chance to meet a few established, talented artists. This parlor will be the only one...

A database is a structure that contains information about many different categories of information and about the relationships between those categories (Pratt & Adamsk 2010). Database objects are entities that exist within a database to support operations such as storing, retrieving and manipulating data. Organizations use large amounts of data and database management system to...

A few years ago, my company decided to hire a man of Middle-Eastern decent to fill an open project engineering position. The gentlemen exemplified what the company wanted and needed in an employee. He had the educational requirements, work history, and years of experience in our manufacturing field. He shined during the interview process and...

Analyse the cash flow problems a business might experience

In this assignment I will be evaluating that an organisation may experience if their sales figures turn out to be lower than the ones that they have actually anticipated or anticipated. 1.1 problems of capital projection Issue 1 Money flow forecasts are something truly important for a service and something that belongs of an organisation...