Talking about Christianity and Islam

There is an Almighty being called God. Christians call him God and Muslims call him Allah. They believe that He is the Creator of the whole universe i.e. the heavens, hell, and the earth and that he sustains life in it. They believe that at one point there were prophets who were God-sent such as Jeremiah, Isaiah, Habakkuk, Elijah, Stephen, Elisha, Zechariah, and Jesus. In both religions there are rules people should follow called the commandments and the moral teachings on vices and virtues.

Don't use plagiarized sources. Get your custom essay on
“ Talking about Christianity and Islam ”
Get custom paper
NEW! smart matching with writer

They believe that Mary was the mother of Jesus, and she was a virgin therefore Jesus was born miraculously, he was the Messiah and he performed miracles doing all these from a very young age. Both believe that the devil Satan is evil. They believe that an anti-Christ will appear on earth at end times. Both belief in the second coming and judgment day.

Let us briefly look at the differences. Christians use the Bible while Muslims use the Quran.

The Bible has been translated into different languages while the Quran is in Arabic. Christians believe in the trinity, Muslims do not. The Islamic religion is a religion of “fitra” while Christianity is a religion of following the steps of Christ. These are just but a few differences.

Christians believe that Satan was once an angel of God, a war broke up in heaven and he was thrown to the earth. Satan is the father of vice and is believed to cause illnesses and therefore the sick can be healed through prayers.

Certain illnesses are God-sent. These are forms of punishment e.g. the plagues that hit the Egyptians in the times of Moses. These illnesses do not need divine intervention since they are periodical. Christians too believe that God has the power to inflict illness and to heal.

Christians believe that the sick must be shown great care through moral support and material support. They say, pray for the sick. Certain churches donate cash towards funding medical expenses for the sick. Christians too visit the sick in hospitals and carry along gifts with them. These gifts are meant to provide joy for the sick and to make them happy. This is also evident in the Bible. Peter and Paul preached to the early church in Antioch. They were encouraging them to always take care of the needy and the helpless within the society. In his time on earth, Jesus Christ too healed the sick in his capacity. A common Christian phrase goes, come unto me those who are weary and I shall give you rest.

Christian believe that communal health support is essential and very necessary. Communal health services include free health practices like vaccination of children, immunization of babies against certain diseases, voluntary medical male circumcision, mass malaria control, and pest control, etc. Many churches have funded movements towards providing communal health care to the people. These health practices are done for free and people are encouraged to take part in these missions.

Christians condemn evil practices such as plastic surgery, abortion, skin bleaching, euthanasia, and any other health practice that deforms the body totally. Technology has played a role in the above practices. From research, Christians believe that these practices are believed to cause cancer or any other cancer-related diseases, Christian churches have funded movements that are aimed at sensitizing people on these practices. In Christianity, the human body is the temple of the lord, it should be kept holy.

Christians believe in the power of healing through treatment. In as much as Christians provide health services they also believe in the power of prayer to aid treatment in order to have healed. This is done through faith, Christian doctors pray before performing surgeries. Christians to pray for the sick that are on medication in order to have a quick recovery. Christians condemn witchdoctors, sorcerers, magicians. In ancient times and even presently, these people are thrown out of the Christian families and gatherings. They are believed to be possessed with demonic spirits and are also believed to engage in vices like killing and speaking to evil spirits.

Christians encourage post mortem. Post mortem is a medical assessment of a dead body to determine certain parameters. Christians believe in medical research using cadavers in order to boost healthcare by widening knowledge on bacteria and viruses that cause death. They also believe in this in order to access possible causes of death in a situation where justice is wanted.

A favorite Islamic saying goes that Allah does not send illness. Once someone becomes sick it is his or her sole responsibility to seek medication. They do not believe in healing through prayer like Christians but follow certain religious practices during certain dates.

Muslims prefer having doctors of the same gender, unlike Christians who are liberal on this. Muslim women prefer to have same-gender doctors and nurses in order to follow rules of modesty in regard to the opposite sex. Related to this, Muslim women cover their head and body in various Islamic coverings according to the custom of their country of origin. To show respect, healthcare workers should ask a Muslim woman for permission to uncover parts of her body for injection, or for any other medical reason.

Muslims follow a given dietary requirement. Consumption of pork and alcohol is inhibited. Medicinal drugs that contain alcohol are also prohibited unless they are life-saving and have no substitutes. Muslims condemn certain practices such as euthanasia and abortion. They also condemn plastic surgery. The Quran says that life is precious. However Muslim women still indulge in certain practices as part of their beautification e.g. body pierces, temporary body tattooing and use of strong scent perfumes as opposed to Christianity.

Muslims care for the sick. On these two most important dates are “Eid Fitr” and “Eid Adha”. On these days they attend to patients in hospitals and offer them moral support. On these two days, Muslims visit hospitals to visit their communities’ patients, as well as cemeteries. Eid Fitr celebrates the final day of Ramadan. On the Eid Fitr, the fast is broken and all Muslims gather in the community to celebrate with a celebratory community meal. On that day the head of each household pays their annual alms to a charity of their choice.

To support psychological and spiritual health and healing, it is widely believed that reading and reciting the Quran brings blessings to those who are spiritually and psychologically distressed. Muslims, therefore, provide a copy of the Quran to Muslim patients as this is helpful.

Muslims do not have specific codes on organ transplants. Sometimes medication may result in transplants that are necessary in providing life support. An example is in a case of fractured bones through accidents. In this case, a transplant would aid in enhancing walking in case of a fractured tibia, and this has no harm to the body.

My spiritual perspective on healing

Healing is the natural process by which the body repairs itself. As a Christian, I believe in spiritual healing. I believe that through faith a human body can repair itself and be back to normal. I believe that sick people can be healed by the spirit that comes from the almighty God. The critical common to all religions/beliefs spiritual components of healing, such as prayer, meditation, belief.

Some of the common facts about healing in all religions are the involvement of powers from the almighty being, usage of the holy sacred books like the Quran and the Bible to provide spiritual nourishment, and faith as a measure of healing. What is important to patients of the faiths when cared for by health care providers whose spiritual beliefs differ from their own? The most important thing here is a restriction within the virtues of a given religion. Most patients would not tolerate health providers who go against the values of their respective religions.

In conclusion, I have learned that no faith allows for plastic deformation of the body. Health providers themselves should take care of the different faiths of the patients they serve as this maintains the respect of faith and spiritual life. This learning is important to health providers because they handle different people and not everyone has the same faith. Health providers should have knowledge of how different religions view health care services, their practices, etc. this helps in reducing conflicts of interests between a health provider and a patient.

Talking about Christianity and Islam. (2021, Dec 02). Retrieved from http://studymoose.com/talking-about-christianity-and-islam-essay 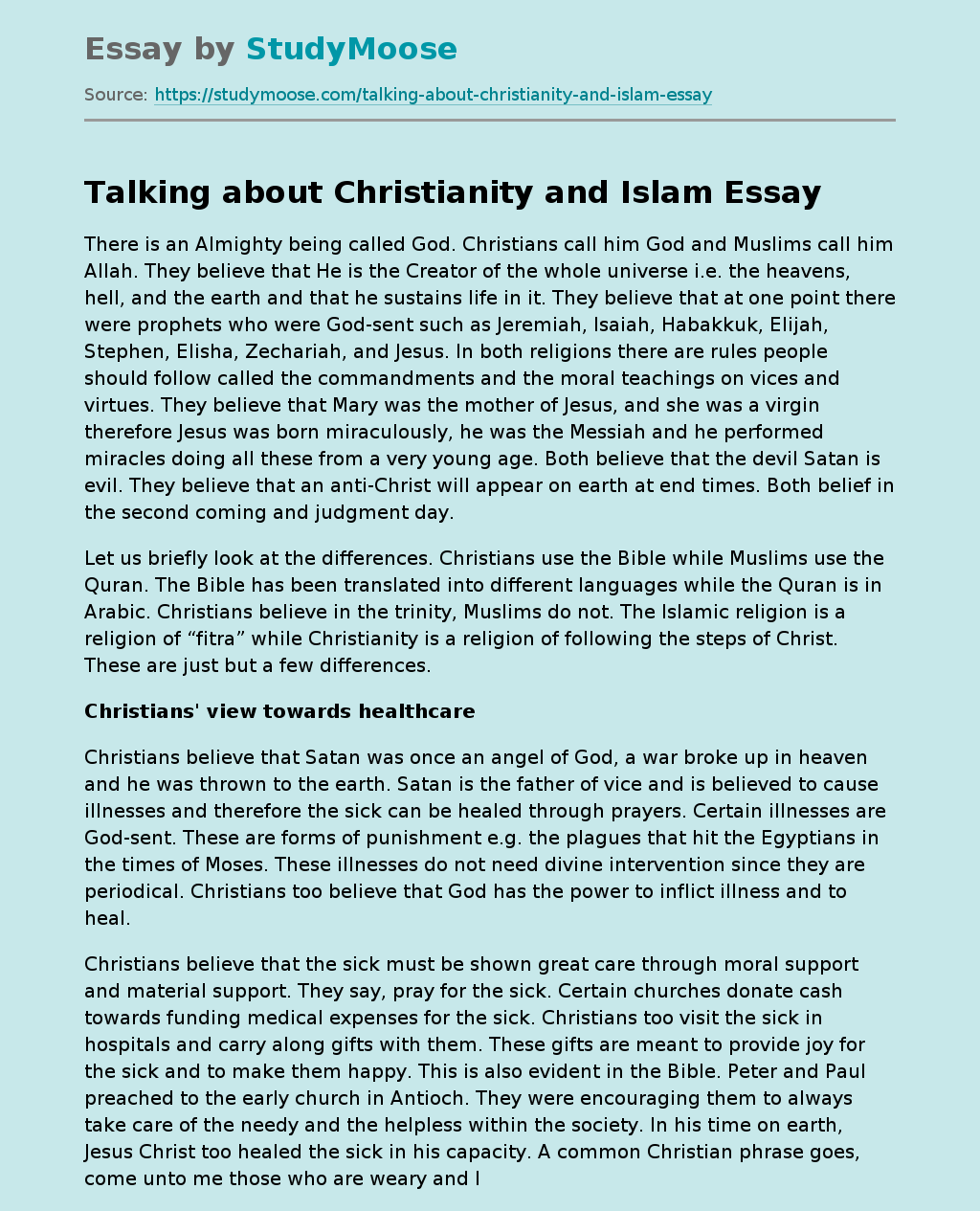