Symbolism of the Pheonix in Fahrenheit 451

The Phoenix has been used as a symbol of great importance for thousands of years expressing the beliefs of the Egyptians and Chinese in the ancient times, as well as being the national symbol for the United States until 1902. The Phoenix assists author Ray Bradbury to give hope to a futuristic censorship society without passion, morals, or beliefs. In Fahrenheit 451, Montag, Clarisse, Faber, and others are all portrayed as phoenixes in their own quest for a change in the society they live in.

Finally, the Phoenix shares some close ties to religion, the Bible, and Jesus. Therefore it can be said that Bradbury effectively uses the symbol and meaning of the phoenix to represent a sense of rebirth, end of suffering, and immorality within Fahrenheit 451.

Secondly, Bradbury uses the symbol of the Phoenix most predominately to refer to a rebirth in the city (literally after its destruction) and to the value, or lack of value, books have to Montag’s futuristic society.

Through Granger’s thoughts, Bradbury expresses the similarities between Man and the Phoenix; “There was a silly damn bird called a phoenix…every time he burnt himself up he sprang out of the ashes, he got himself born all over again…must have been first cousin to Man”. The comparison between Man and the Phoenix is effective because it gives the reader a sense of self-renewed hope for mankind, especially since Man can remember the mistakes that he has made and hope to learn from them in the future.

In Fahrenheit 451, Granger is not the only character that takes each breathe for the sole purpose of continuing his quest for change. Montag, Clarisse, and Faber all dislike the “status-quo” of society and strive to end it. Another reason is that some characters including Montag, Clarisse, and Faber struggle to end the suffering they have each been put through due to the prevailing views of their futuristic society.

Bradbury secretly hides subliminal facts hinting towards the notion that each “heroic” character is a Phoenix in their own way. Faber is characterized as the “old Phoenix”, one that will burn up and pass away, but has learned the usefulness items outcast from society. Clarisse is illustrated as the newborn Phoenix that was born in its own ashes as a sign of hope to society, shown by her innocent yet questioning mind.

Ultimately though, the Phoenix represents a new hope or shining light after it is born in its own ashes, which relating to Jesus, is shown through Montag and his spiritual resurrection. Throughout all of man’s history the Phoenix has always had some affiliation with the practiced religion of the time, and is to no surprise used to symbolize Montag’s spiritual resurrection in Fahrenheit 451. The Phoenix can be compared to Christianity and Christ because both gave up their lives for the greater good of the future. There is a passage from Revelations that refers to Heaven while “When we reach the city”, the last line of the book, contains a solid link between Montag’s destructive world and the Apocalypse of the Bible, thus his spiritual resurrection.

For those reasons, Bradbury effectively uses the symbol and meaning of the phoenix to represent a sense of rebirth, end of suffering, and immorality within Fahrenheit 451. He links the Phoenix to hope for change in Montag’s futuristic society. Bradbury also gives reason to believe that in addition to Montag, Clarisse and Faber contrast between the newborn and the aged. Ultimately though, Bradbury uses the Phoenix to renew religious beliefs back into Montag’s life and moral less society.

Symbolism of the Pheonix in Fahrenheit 451. (2017, Feb 17). Retrieved from http://studymoose.com/symbolism-of-the-pheonix-in-fahrenheit-451-essay 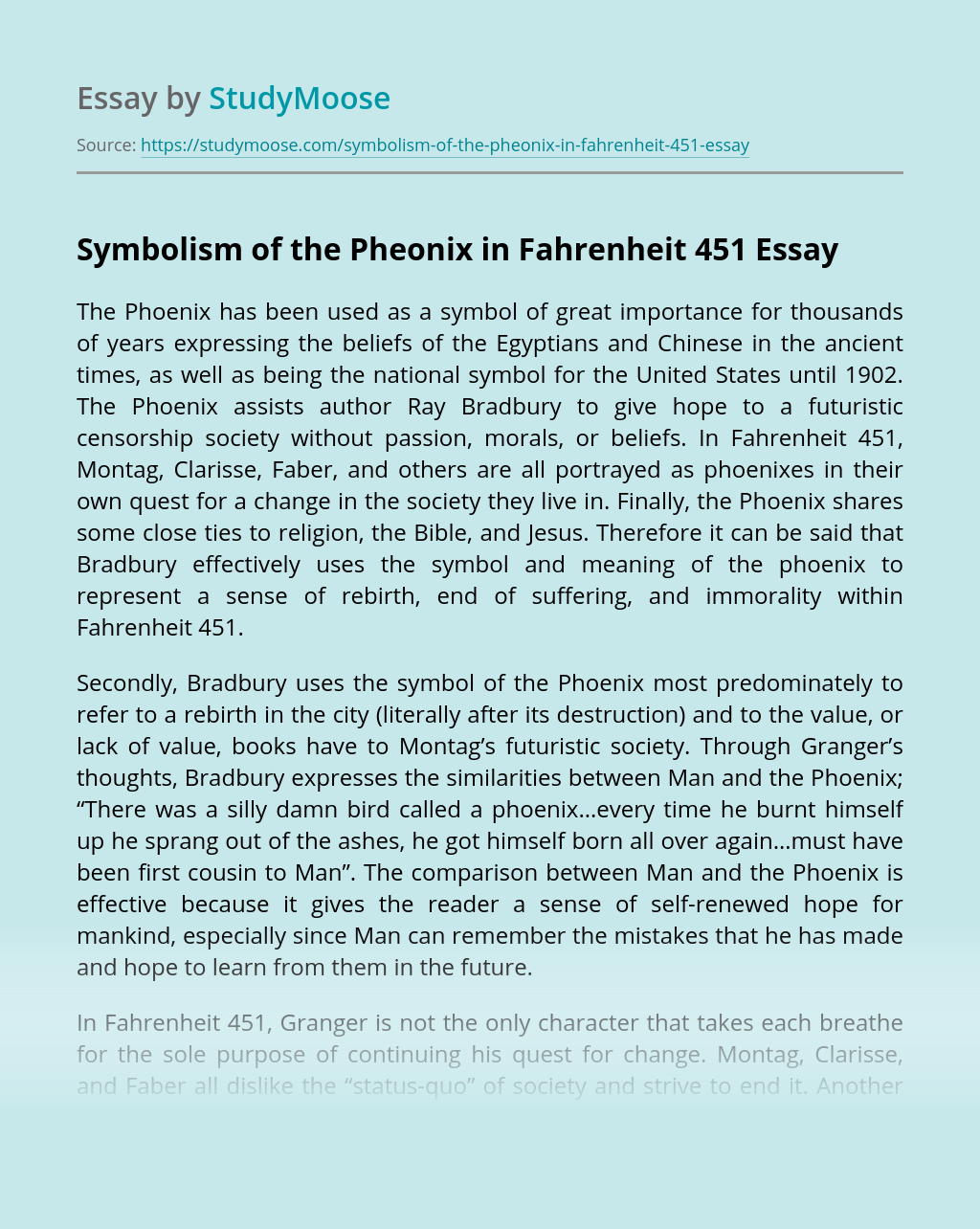 Don’t waste time
Get a verified writer to help you with Symbolism of the Pheonix in Fahrenheit 451
Hire verified writer
$35.80 for a 2-page paper
Stay Safe, Stay Original