Symbolism is a tool that has been used since the beginning of literature, even past that, when there were no written stories, but instead only told over and over. In fact it is even a popular tool used in many classic works of literature, one of the most notably of which is Huckleberry Finn. Huckleberry Finn is a work which is often said to be one of the quintessential American works of literature. Throughout the book, there are many important conversations, ideas, and principles taught and discussed.

Don't use plagiarized sources. Get your custom essay on
“ Symbolism is a tool that has been used since the beginning of ”
Get custom paper
NEW! smart matching with writer

A large way these are subtly seen, is through symbolism. One example of this that can be found in the book, is the symbol of the raft. It may seem odd, for such a crude means of transportation, to have a deeper meaning, however, there is lots of meaning which can in fact be found. Often times, Jim and Huck are seen to have their closest moments of friendship, and freedom on the raft.

Therefore the raft is meant to be viewed as more of an escape or release from the worldly restraints of the legal climate which surrounds them during this time, which states that a white man may own a black person. On the raft, preconceived ideas, regulations, and laws, are hindered, to reveal the endearing friendship between a boy and a man. A friendship that would have never been possible, had not the raft physically taken them out of the places where they could not have been friends. And had the raft as well not physically forced them to become closer, they may not have been able to grow their emotional relationship of friendship.

The raft, therefore represents a freedom from worldly constrictions. The next large symbolism in this book is through the river. The river, although having a similar meaning to the raft, can be seen as quite different. While on the river, the idea, perceptions, and opinions of Huck, towards Jim change.

While, in the beginning Huck may have seen Jim as no more than an escaped slave, who should be returned to the owner, slowly through their journey, Hucks opinion of Jim change. This can be seen as how the very climate of America’s opinion on savery was well changing. Through the book Huck becomes closer to Jim and sees him no longer a slave, but as a human being the same as him. The river is the place in which this happens, the river is also the place of which they are slowly treading through getting closer and closer to freedom. Through the journey Huck changes, until at the end he has a different opinion of Jim entirely, such as many other Americans views were changing as well. The river therefore represents the journey through which the opinons of slaves, and slavery changes, not only for Jim, but for America as a whole. The final representation of symbolism used in the book, is seen through the shore. If the river shows the journey in which through many people’s minds were changed about slvery, then the shore can often represent hindrance to this change of mind. Often times when Huck was on the shore, or land, he was separate from Jim, and often the reader could see how Huck’s mind was no longer progressing, or thinking about Jim and his situation. Often times because of distraction. The shore can show because of distraction, or a lack of encouragement someone may be unwilling, or unable to see the wrongs of slavery. It is only when Huck is reunited, and with Jim, most often on the raft, where he begins to see how bad slavery really is, and how slaves are normal humans just like any white person. The shore represents, the changing directions of one’s mind. To be on the shore is to be unwilling, or unable to view the discourse of what may be happening around us. All in all, well written literature, often has much more meaning than what is seen at a surface level. However, it is only through conscious observation we can see the deeper meanings hidden in works of literature, and through his conscious observation we can have a better, and deeper understanding of somethings meaning or significance.

Symbolism is a tool that has been used since the beginning of. (2019, Nov 22). Retrieved from https://studymoose.com/symbolism-is-a-tool-that-has-been-used-since-the-beginning-of-example-essay 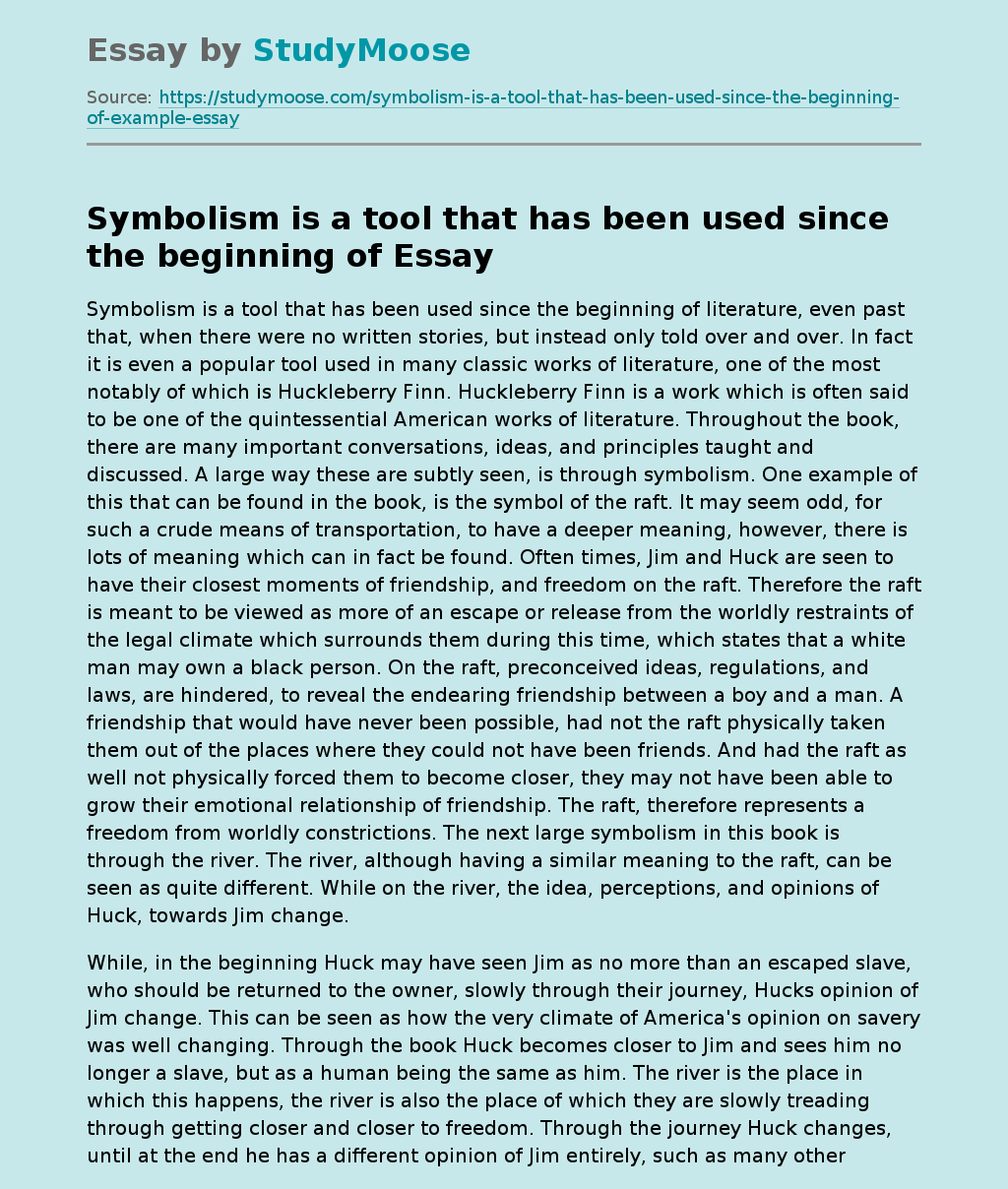