Symbolism in The House on Mango Street

Sandra Cisneros, the author of the House on Mango Street, writes each vignette in a very poetic manner. Her writing seems simplistic, but there is a lot of meaning embedded and woven into it. This coming of age novel is written in a unique and creative way filled with figurative language, especially symbolism. The three main symbols expressed throughout the vignettes are shoes, trees, and houses. With the shoes representing maturity and her becoming of a woman, the trees representing strength and bravery compared to that of Esperanza, and houses which symbolize happiness as well as confinement.

Don't use plagiarized sources. Get your custom essay on
“ Symbolism in The House on Mango Street ”
Get custom paper
NEW! smart matching with writer

The first main symbol expressed throughout the vignettes is shoes. The variety of shoes Esperanza obtains and wears are symbolic of her growing into an adult, representing attributes from childhood and womanhood. In the vignette, The Family of Little Feet it says, “Then Lucy screams to take our socks off and yes, it’s true. We have legs.” After the girls try on the shoes they are overwhelmed with the feeling of being a woman.

Proficient in: The House On Mango Street

These shoes almost instantly turned them into a woman, therefore when Esperanza tried them on she was no longer a child. From the vignette Chanclas, it says “…until I forget that I am wearing only ordinary shoes, brown and white, the kind my mother buys each year for school.” While dancing Esperanza is taken away from her feelings towards the shoes she is wearing, she feels pretty and woman-like, until she remembers that these shoes are the ones she wears to school every year.

Therefore taking away her feeling of being a woman and setting her back to feeling like a child. In the vignette, The Monkey Garden it says, “I looked at my feet in their white socks and ugly round shoes. They seemed far away…the garden…didn’t seem mine either.” Considering the fact that this vignette is read towards the end of the book, the shoes and the Monkey Garden playground aren’t being recognized because Esperanza has matured.

The second main symbol expressed in the House on Mango Street is trees. Trees in the House on Mango Street are symbolic of strength and bravery. In the vignette, Four Skinny Trees, it says, “They grow up and grow down and grab the earth between their hairy toes and bite the sky with violent teeth and never quit their anger.” The trees are growing relentlessly, symbolizing strength, regardless of the fact that they had been planted on concrete. In this vignette it also says,“When I am too sad and too skinny to keep keeping…then it is I look at trees.” Esperanza looks upon the trees to give her strength and bravery to “keep,” at times when she feels weak. Therefore she looks up to the trees as beings with great power and strength, of such greatness to the point where she feels like she can look up to them for motivation. Also in this vignette it says, “Four who grew despite concrete. Four who reach and do not forget to reach.” This strength being portrayed by the trees ultimately reflects Esperanza’s life. The setting the trees were planted in and the setting where Esperanza lives currently are both places they feel they don’t belong, yet end up in anyways. Despite their unusual settings of growing up, they manage to survive and thrive.

The last main symbol portrayed in the House on Mango Street is houses. Houses are symbolic of freedom and happiness, however also are portrayed as a symbol of confinement. As the author characterizes Esperanza, it is easily perceived that something that she wants nothing more in life is to have her own house. In the vignette, Bums in the Attic, it says “I want a house on a hill like the ones with the gardens where Papa works.” as shown in this piece of text, Esperanza fantasies of the houses on the hills, dreaming of what it would be like if she had one of her own. In the same vignette it says, “They don’t look down at all except to be content to live on hills.” Thus representing how the idea brings happiness to the people who own their own house. Therefore, Esperanza aspires and fantasies what it would be like to feel the happiness radiated from owning a house. However, as expressed in the book, houses also represent confinement. In the vignette, Rafaela who Drinks Coconut & Papaya Juice on Tuesdays, it says “Rafaela leans out the window and leans on her elbow and dreams her hair is like Rapunzel’s…On the corner there is music from the bar, and Rafaela wishes she could go there and dance before she gets old.” This expresses the idea of confinement and imprisonment that Rafaela’s house offers. Compared to other people, particularly women, like Rafaela in the House on Mango Street are trapped with nowhere to escape, looking out the window all day, longing for freedom and instead are living the reality of being trapped inside their own home.

The three main symbols expressed in the House on Mango Street tie all of the vignettes together overall helping to develop the main idea or theme of the book. Her simplistic yet, deep writing style is highly influenced through the use of symbolism, with the three main symbols being shoes, trees, and houses. The symbolism in the House on Mango Street has added depth and meaning to creatively express a young girl’s coming of age story.

Symbolism in The House on Mango Street. (2021, Dec 02). Retrieved from http://studymoose.com/symbolism-in-the-house-on-mango-street-essay 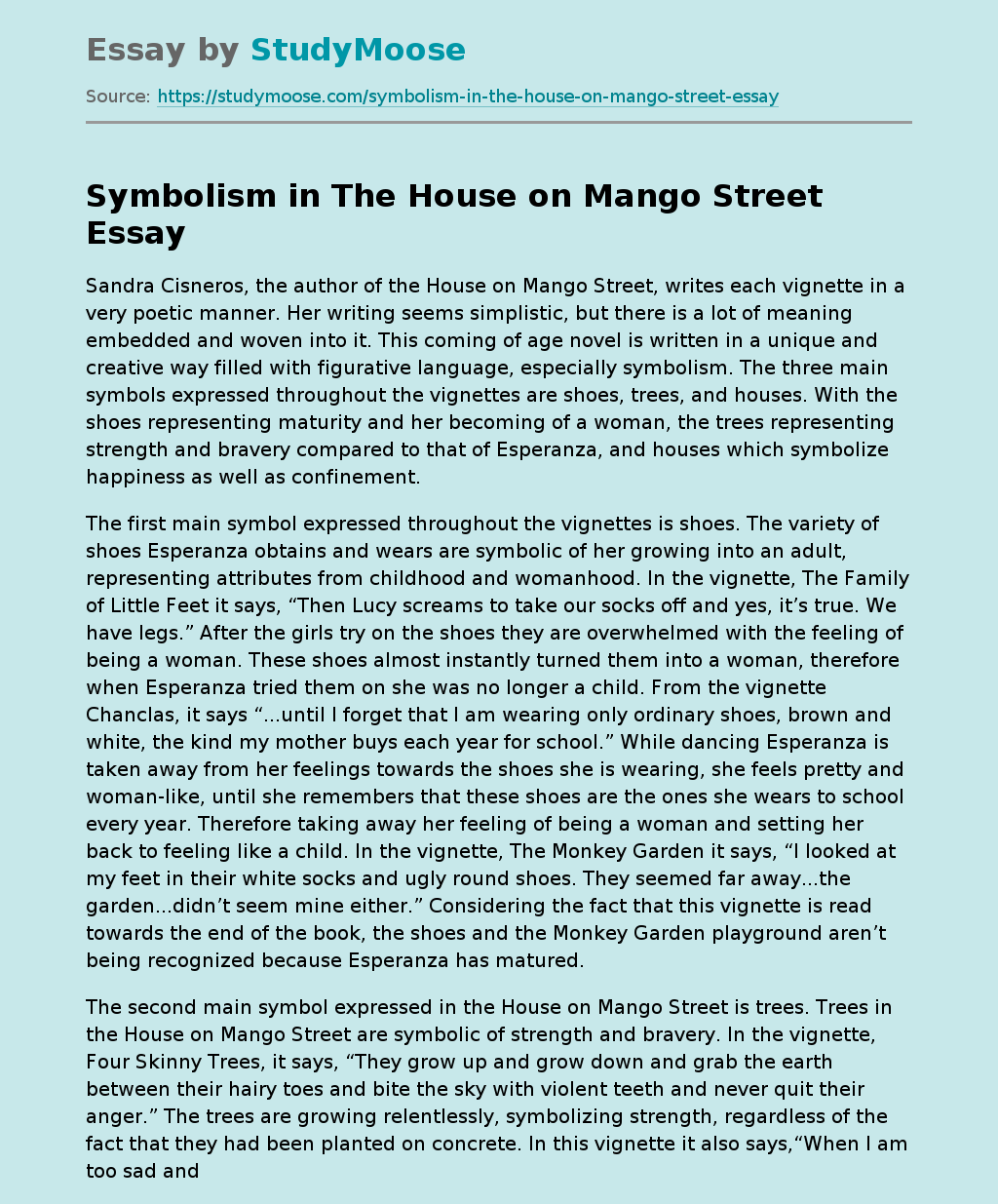