Symbolism in 'The Elephant Vanishes'

The main symbol in ‘The Second Bakery Attack’ is the concept of the “tremendous, overpowering hunger pangs”, and what they represented to the protagonists in the novel and Japanese society as a whole. For me, I feel as though the hunger was more than a physical hunger for food, but a yearning for something, for example change in the way that society is run, connected to the fact that instead of anything violent happening during the first bakery attack, they were told to listen to Wagner.

Don't use plagiarized sources. Get your custom essay on
“ Symbolism in ‘The Elephant Vanishes’ ”
Get custom paper
NEW! smart matching with writer

This suggests that something is not right, and that the choices that people make are somewhat disillusioned by Western culture, in comparison to Japanese culture.

In addition to this, the hunger represents the feeling of emptiness that the protagonist and his wife feel, possibly in the lack of communication between them, where they are not used to living with each other and such, therefore suggesting that Japanese people are too individualistic, and should learn to communicate with one another better in order to sustain a good standard of living, and finding meaning in each other in life, connected to how the wife proposes a second bakery attack in order to fulfill the lack of action in the previous bakery attack, thereby fixing what was wrong, and providing her husband’s life with something that is worth mentioning, through their eventual success in life.

On Seeing the 100% Perfect Girl One Beautiful April Morning:

One symbol that is used in ‘On Seeing the 100% Perfect Girl One Beautiful April Morning’ is the use of the stamp on the letter.

It is mentioned twice in the short story, and is the object with the most detail, stating that it was a “crisp white envelope lacking only a stamp”. The fact that there is a stamp that is lacking on the letter suggests that the letter was never meant to be sent, and thus lacks any meaning to the grand scheme of life. This further suggests that possibly an individual’s role in life and purpose is not of any relevance to other people, showing isolation from society and other Japanese citizens. This connects to at the end where the letter is now described as a “special-delivery letter”, thus again suggesting that its contents could be to do with her personal life, however it will never reach anywhere. Finally, this concept could show people in Japanese society’s expectations in life being too high, where some things or people will never be able to obtain their full potential.

The most symbolic reference in ‘Lederhosen’ is, in my opinion, the lederhosen itself, where it mainly pints towards the affect of the Western culture on the Japanese, as well as its connections and contrasts to the way that Japanese culture in itself is carried out. As the lederhosen is a typical German outfit, and could not possibly be confused with any other country, it is obvious that it is from Western culture, and thus the fact that it is this that has made the woman realize how much she hates her husband could suggest the power of the Western culture over Japanese people. This could also be connected to the bigger picture of Western culture as a whole, where Murakami points out that it is something that the Japanese people should strive towards. However, in addition to this, it seems quite ridiculous that something like lederhosen could be so powerful that a seemingly normal relationship could deteriorate so quickly over, therefore Murakami could also be suggesting to us as reader that we need to find a balance in accepting new Western cultures and way of lives, however also keeping to traditional Japanese values such as family and love within significant others.

I think in ‘The Little Green Monster’, the biggest symbolism is the actual monster, as it seems a very unrealistic thing to be real, therefore I feel as though it has the biggest representation in the story. My interpretation of the story is that the little green monster represents choice, and the choice that the woman had to either accept his offers of love and acceptance, as she is portrayed as being alone and isolated in the beginning of the story, as well as how judgmental people in the Japanese society can be. This is through the use of the woman being completely and utterly rude and violent towards the little green monster, not giving him a chance to explain himself properly.

Although the little green monster is described as being quite scary in his opening descriptions, we soon realize that it is the woman that actually has the power, and is abusing it by torturing the monster. This could suggest that people in Japanese society abuse the right of freedom and choice, or at least do not know how to respond when they are presented with it. Furthermore, I think that the little green monster is a symbol of judgments, where the woman was first described as a housewife, but then turns out to be violent, and the little green monster is described as violent but then turns out to be the victim. This, to me, suggests that Murakami is pointing out the need for people in Japanese society to look beyond the cover and the presentation of things, and search for the true meaning, which also therefore connects to the theme of existentialism.

In ‘The Elephant Vanishes’, I think that a main symbol is the elephant. It is a common expression to say that there is an “elephant in the room”, which suggests an awkwardness or dissatisfaction with current situations. This in itself could already show Murakami’s call for change in the way that Japanese people live their lives, as well as connect to the aspect of Karoshi and overworking. Furthermore, the elephant signifies Japanese tradition, where people did not have the heart to get rid of it, but felt as though it should still be a part of their community, even though they did not particularly want it, showing an obligation to uphold traditions rather than a liking for it. When the elephant shrunk and disappeared, this suggested one extreme to another, of traditional Japan to post-modern Japan. The fact that the protagonist kept articles of it showed that he wanted to try and find meaning of the loss of these traditional values however could not. This shows the loss of people in responding to new challenges, thereby connecting to the roboticness of Japanese people, where they prefer to follow a set of rules, such as regulations in society or step-by-step rules in work, rather than think for themselves.

Symbolism in 'The Elephant Vanishes'. (2020, Jun 02). Retrieved from https://studymoose.com/symbolism-elephant-vanishes-new-essay 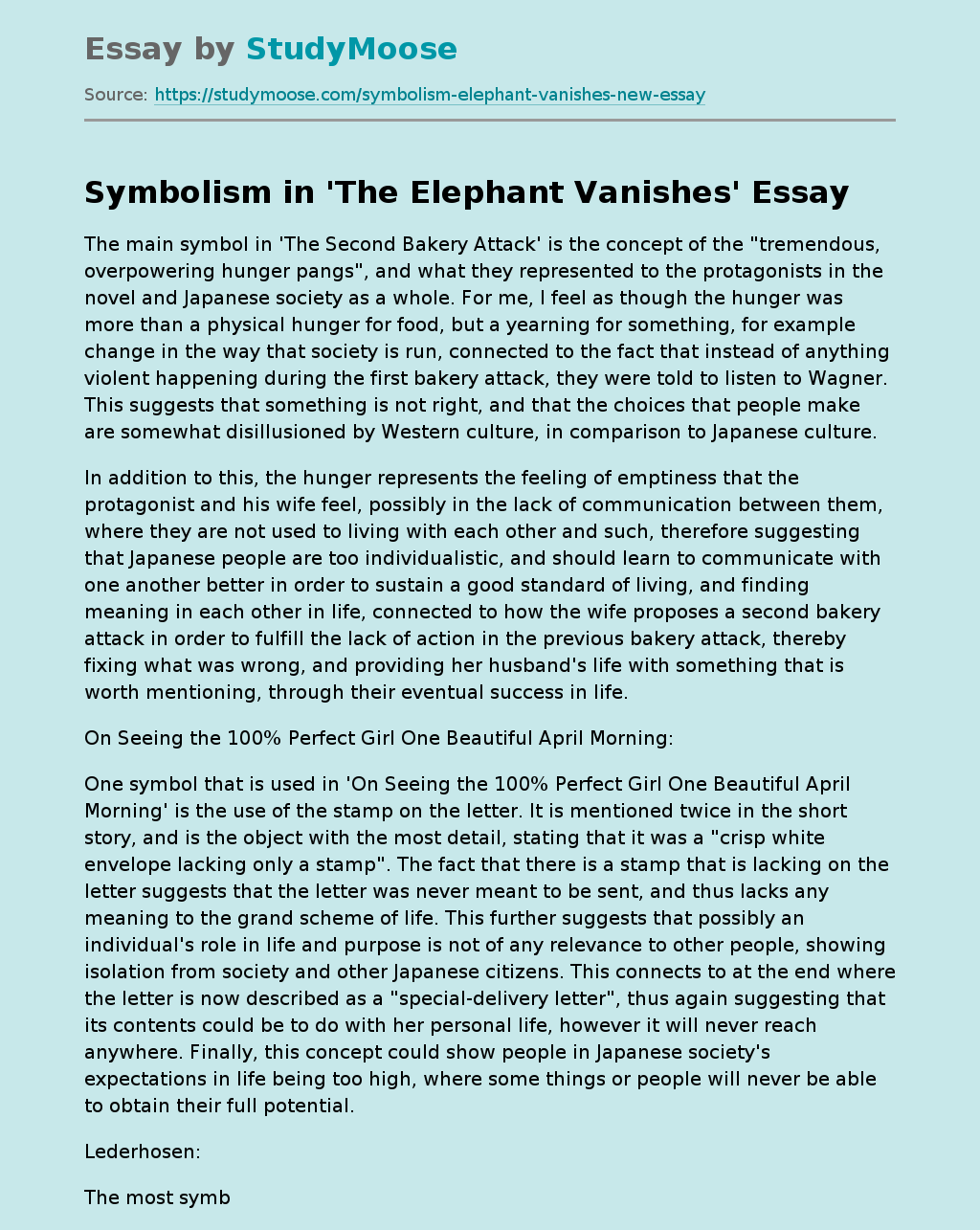