During the years (1823-1886) as British Empire had control over Burma, a British Indian Imperial Authorities named George Orwell composed an impressive essay/story through which he expressed the morality of British Imperialism and the hatred of the Burmese towards this Empire. Using a particular kind of language has made this story different from others. Using importance and metaphors is one of the most crucial uses of language that Orwell uses to explain the relationship of himself with the elephant and the crowd with the Burmese people.

Get a verified writer to help you with Orwell’s Shooting an Elephant: Reflections on Imperialism

In real fact the story itself is considered as a metaphor for British imperialism. One of the most typical symbols in the story is the mad elephant which is a symbol of the British Empire. Similar to the elephant, the empire is huge and effective. When the elephant raids the town (marketplace), he signifies the British Empire raiding the economy of Burma. When it kills the veliger (coolie), he represents the British dominating the natives.

There the elephant was disliked by the natives similar to the Empire. An alternative usage of language in the essay is using paradox through which he reveals the story in calm way even though when he’s discussing extremely disturbing occasions.

The essay opens with a discussion of him being hated, yet he seems quite an elegant person, and one of the least likely people to be hated. He wants to help people, but must do so by killing the elephant. As discussed the elephant was evidenced to be a symbol of the Empire and the fact that Orwell was associated with the Empire made it really hard for him to shoot the elephant.

But he has to in order to not look like a fool the story finally ends with him saying “And afterwards I was very glad that the coolie had been killed” He holds the position of police officer yet is glad by the death of a villager because it provided him a reason to why he killed the elephant. Orwell also uses the technique of imagery to the strongest degree to expand his argument. In the moment that the he looks back on the crowd of natives behind him, he portrays the people as a “sea of yellow faces”, hungry for action and excitement. Indeed, during the course of the next few scenes, Orwell feels this power as a solid force forcing him to shoot the elephant. Most use of the imagery occurs during the shooting and the death of the elephant as he describes the scene “A mysterious, terrible change had come over the elephant. He neither stirred nor fell, but every line of his body had altered.

He looked suddenly stricken, shrunken, immensely old, as though the frightful impact of the bullet had paralysed him without knocking him down. At last, after what seemed a long time – it might have been five seconds, I dare say – he sagged flabbily to his knees. His mouth slobbered. An enormous senility seemed to have settled upon him. One could have imagined him thousands of years old.” Then after he fired his last two shots into the elephant, he describes the blood and the agony of the elephant. Orwell’s use of imagery here is to make the reader/audience feel/see the pain of both the elephant and the regret of his own as he fell into the noble pressure that the Burmese had over him. The use of language this story has a massive effect on the audience. It is written in a way to portray how the British Empire had an impact on the Burmese people and their economy without the audience realising it. The uses of language and literary devices in this story give the audience a different idea of what going on. But in fact when it’s reviewed in depth it has a different meaning.

Orwell’s Shooting an Elephant: Reflections on Imperialism. (2016, May 23). Retrieved from https://studymoose.com/orwells-shooting-an-elephant-reflections-on-imperialism-essay

Get a verified writer to help you with Orwell’s Shooting an Elephant: Reflections on Imperialism 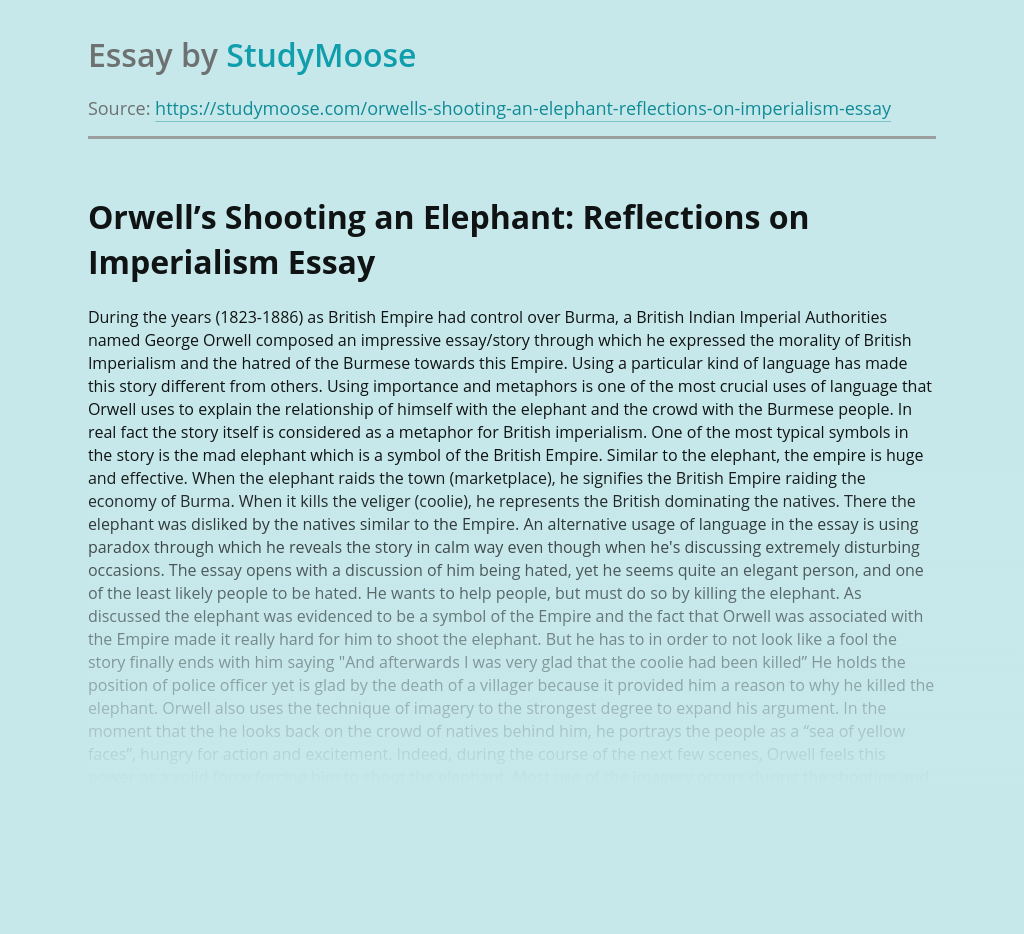 Throughout the beginning of Frederick Treves’s The Elephant Man, the character of John Merrick was simply a man that never got the chance to live a normal life. From the day he was born, his unfortunate physical deformities led him through a never ending cycle of ridicule, repudiation, and distress. This “monster” was considered to...

George Orwell’s essay “Shooting an Elephant,” introduces an intriguing insight on imperialism, ethical disputes and fear of judgement through the inner functions of a European law enforcement officer provided the intense task of handling an elephant in musk within Moulmein, in lower Burma. Imperialism, as defined in the Oxford English Dictionary, reads that Imperialism is...

In Les Schobert’s article entitled “Let the Zoo’s Elephants Go” She discusses how national zoo is only embarrassing itself in the way that cares for its elephants. She covers how elephants are euthanized for foot problems that become debilitating. Which are caused from inadequate conditions in which they have been held. She informs us of...

Greed. Fear. Anger. These traits define the human being. No matter how rational, how sensible or reasonable a person can be, these attributes linger about them, silent, like a shadow. In times of peril, when pressure is great, often people are unable to control their savage inner instincts, and these characteristics explode out of them,...

In this essay, Shooting an Elephant, George Orwell, comes face to face with the effects of peer pressure and imperialism. While under constant scrutiny by the people who did not want to be ruled, he felt “stuck between the hatred of the empire I serve and my rage against the evil-spirited little beasts who tried...

Water for Elephants by Sara Gruen

Astonishing, touching, and humorous Water for Elephants is that exceptional tale with an account so riveting, one is unwilling to turn it down; with characters so appealing, they persist to survive long even after the final episode has been read; with a humanity situated in various forms of conjecture, a world so authentic, one begins...

Symbolism in 'The Elephant Vanishes'

The main symbol in ‘The Second Bakery Attack’ is the concept of the “tremendous, overpowering hunger pangs”, and what they represented to the protagonists in the novel and Japanese society as a whole. For me, I feel as though the hunger was more than a physical hunger for food, but a yearning for something, for...