Tan Sri Syed Mokhtar Al-Bukhary is the chosen leader that I want to share in this assignment. Before this, we just heard his name without knowing his background. I eager to write about him because he just an ordinary person that doing extraordinary things. He is also the richest Malay in this country and very much respected businessman and philanthropy. I will share with you about the life of Tan Sri Syed Mokhtar Al-Bukhary and highlighted about his contribution to serve the nation.

Don't use plagiarized sources.
Get Your Custom Essay on Syed Mokhtar Al-Bukhary Just from $13,9/Page

The success enjoyed by Syed Mokhtar today was not gained through an easy ‎shortcuts. Hard work, self-confidence and faith that everything comes from Allah has ‎made him a Bumiputera muslim icon for everyone to aspire to. ‎

He is one of the successful examples for any of business pupils and entrepreneurs. I would like to write on the part of background of Tan Sri Syed Mokhtar Al-Bukhari to show how a successful entrepreneur suffers in his early stage.

The earlier stage of the business from the beginning to success will almost discuss on what the failures that Tan Sri Syed Mokhtar faced. Following by the empire story will discuss how this successful entrepreneur climbs up from the failure and how he moved to another stages. Besides, this part will also provide the successful fields and plans that he has involved in. The following part of the assignment will show the recognitions that Tan Sri Syed Mokhtar achieved. Last but not least, I would like to conclude my assignment by providing a conclusion to his business.

Tan Sri Syed Mokhtar Al-Bukhary is a famous millionaire that is known as a low profile person. He is the 7th richest man in Malaysia. He is becoming the role model of every student and potential entrepreneurs to emulate due to his established skills in business. His full name is Syed Mokhtar Shah bin Syed Nor Al-Bukhary. He was born in Alor Setar, Kedah in 1952. Tan Sri Syed Mokhtar is the third of seven siblings in his family. He was born into a Hadhrami Arab ancestry and he was living in a middle class family. His father’s name is Syed Nor Al-Bukhary. Before his father decided to live in Kedah in 1940s, he had travelled to Central Asia and Thailand to trade. His mother’s name is Sharifah Rokiah Syed Mohamed Rahmat.

She always taught him to give some charity to the needy ever since he was young. Syed Mokhtar is married with Sharifah Zarah Al-Bukhary and obtained five children. When he was nine years old, he was sent to live with his uncle, Syed Omar in Johor Bahru and studied there until he was form two. Then, he went back to Kedah to finish his education until form five at Saint Michael’s School. He never went to a university to further his study. However, he improved and gained his knowledge and experience in business through his own experience that he got during his youth time.

Tan Sri Syed Mokhtar has a lot of business that he is involved in. Some of the groups that are combining in Al-Bukhary Company are MMC Corporation, Tradewinds Malaysia Berhad and DRB-Hicom Bhd. In these companies, it have been divided into many subsidiaries which is some of the companies are in automobiles, financial, non-financial, residential, transport and logistics, energy and utilities, other companies.

Tan Sri Syed Mokhtar also opens up Al-Bukhary Foundation as a charity to the community, to help the community with providing a university and medical center. From this foundation, it has a lot of tuition classes and most of the students who joined those classes are successful students that will be sponsored to further their studies into a higher level.

Tan Sri Syed Mokhtar started to involve in business during the recession period where his father needed him to do the accounting in the business that his father ran. His father asked him to go through the accounting book and take care of it. Besides, he helped his mother to plant and sells the vegetables in the market after he finished his high school. He is also selling roti canai at the market to lessen his family burden by increasing the income. Other than that, he helped his father to cattle the cows but the business didn’t go very well because of the foot-and-mouth disease.

Tan Sri Syed Mokhtar took over his father business but decided into selling meats business and sell it to the wholesale. The meats that he sold are coming from the unsold meats in the market and he was trying to sell it again to the other dealers around Alor Setar. The level of confidence in doing business had boosted up after he gained some profit from selling the meats.

Then, he intended to change into a logistics business after he obtained 4 permits for class-A lorries. Tan Sri Syed Mokhtar opened a transportation company named Syarikat Pengangkutan Sentosa in 1972. He started his logistics business by borrowing RM110,000 from MARA to buy two Mercedes 911LS lorries. As the time flies, the Syarikat Pengangkutan Sentosa had grown rapidly by increasing the number of lorry. He used the lorry to begin a rice trading business. 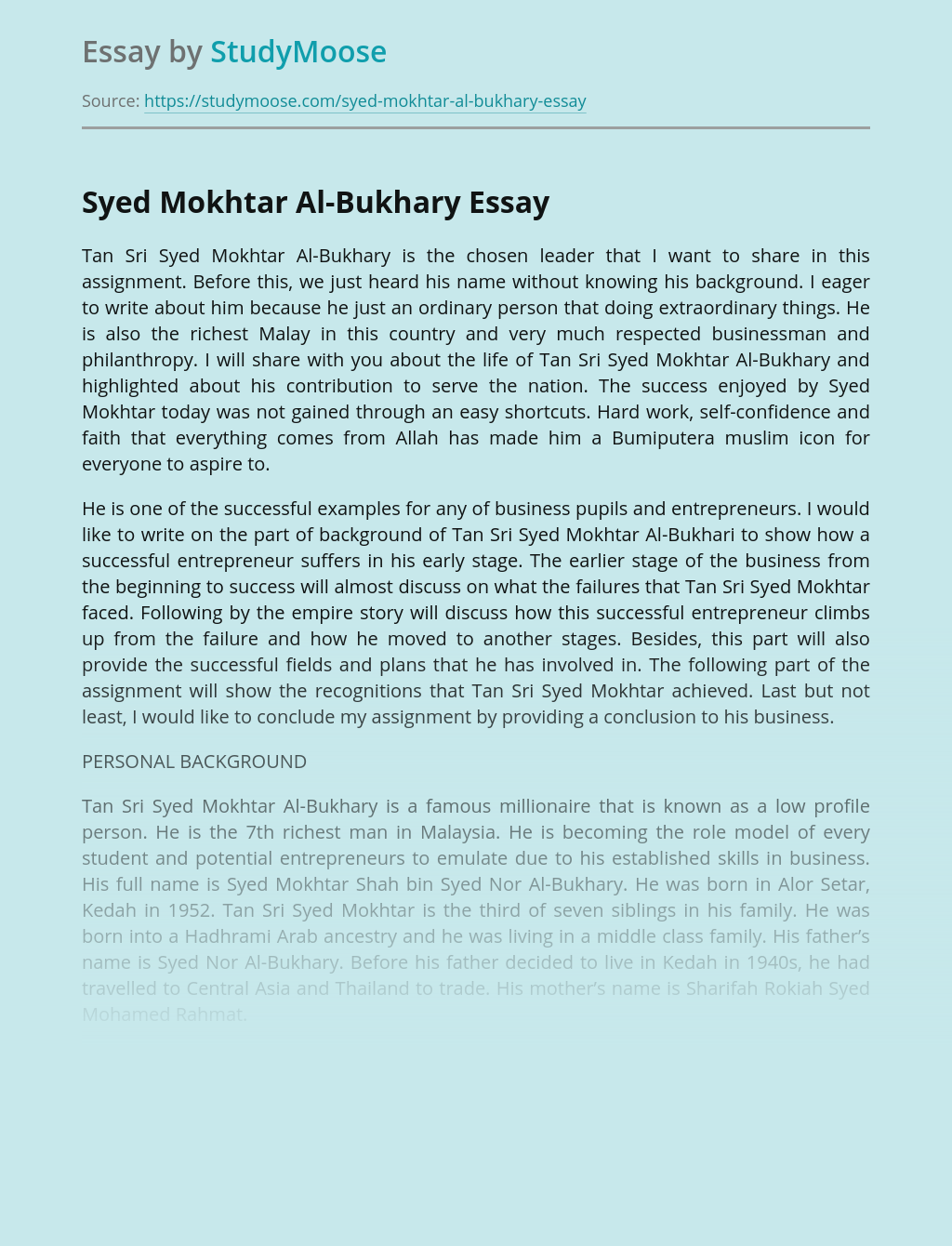 Rate this post When i heard the word leadership, i very first think about myself to consider if I’m a fine example of leader or not. The most important piece of management is self-leadership. If an individual can’t lead herself/himself, how is she/he going to lead others? A good example of leader ought to know...

Rate this post Introduction This essay will include info about Richard Branson, his personality, how he was raises, his influences. Also economic and ecological consider relation to Virgin Group will be talked about in the 2nd part of the essay. In the third and tail end info about how Branson spend spare time and treats...

Get Essay
The Contingency Theory

Rate this post The contingency Theory reveals the relationship between the leader’s orientation or style and group efficiency under differing situational conditions. The theory is based upon figuring out the orientation of a leader (relationship or task), the aspects of the situation (leader-member relations, task structure and leader position power), and the leader orientation that...

Rate this post In the Path-Goal Theory of leadership, the leader is effective when their behavior has an impact on motivation. Follower satisfaction and performance can be improved by offering rewards for goals, clarifying the path to goal achievement, and removing impediments to task execution. Path-Goal Theory is related to the Expectancy model, which concludes...

Good to Great by Jim Collins

Rate this post I found my reading of Good To Great by Jim Collins very informative and even entertaining. It is interesting to me his concepts and perceptions and how although when you read them they seem rather elementary and obvious, Mr. Collins is indeed an outside the box thinker/writer and it is because of...

The Relationship Between Leadership Style and Personality Traits

Rate this post Mohammad Nasir Zahor (18827) Emran Hamkar ( ) Environmental Designs International (EDI) Question 01: ”At the senior management level, you get hired for competence. You get fired for personality.” In your opinion, is this statement true or false? And how does it relate to Barry Carver and his current leadership style? Answer...

Rate this post The Irish health system is continuously under review and experiences regular change and transformation at every level. The impact of these ongoing changes within health and social care services affects almost every aspect of organizational culture, the way staff work and how each organisation plans and delivers services for the benefit of...

Rate this post Quality assurance refers to any action directed toward providing consumers with goods and services of appropriate quality. Although craftspeople were attentive to quality, the industrial revolution moved responsibility for quality away from the worker and into separate staff departments. This had the effect of making quality a technical, as opposed to managerial,...