Losing someone close to you can feel like losing a part of yourself. A piece of you goes missing. Imagine living your life with them there and then having them ripped away from you. It really is as horrible as it sounds. In “The Unmothered” Ruth Margalit explains her experience of losing her mother to cancer. She tells about what it’s like on certain days of the year such as, her mother’s birthday, the day her mother was diagnosed with cancer, and her parent’s anniversary.

Turn in your highest-quality paper
Get a qualified writer to help you with
“ Summary Strong Response Essay ”
Get high-quality paper
NEW! AI matching with writers

She also gives some memories she has of her mother and what her mother taught her. I, like Ruth, also lost my mom to cancer so I was really able to connect with this article. I also dread certain days of the year but unlike the author I see my mother’s death in a very different way.

“The Unmothered” by Ruth Margalit was an article written in The New Yorker about what it was like losing her mother.

Margalit’s mother was diagnosed with Stage IV lung cancer after thinking she had a cough and a “pulled” muscle in her leg. After her mother’s diagnosis she began to think somewhat selfishly, “The truth is, I was thinking, selfishly, about myself. That my mother would never see me marry. That she would not know my children. That the following summer I would turn twenty-eight -her lucky number- and she might not be there” (Margalit). According to Margalit, she believes that she experienced both anticipatory grief, mourning before death, and delayed grief, a postponed reaction to the death.

She explains that the day her mother was diagnosed she grieved. Right after Margalit began graduate school at Columbia she received a call from her sister saying that her mother was getting sick very quickly, she knew she needed to get home as fast as she could.

Margalit later was thinking about her grieving process and realized that she didn’t experience delayed grief but rather that “grief keeps odd hours, the most painful moment at the most abstract moment” (Margalit). She turned to literature to help her express how she was feeling. Instead of journaling her thoughts she would write down quotes about death and grieving. That was what helped her to realize that she wasn’t motherless just unmothered. Margalit ends the essay by describing what her mother left the earth with, “Like a last rain, my mother left behind an earthy scent that lingered long after she was gone. Like a last rain, for a fleeting moment, everything she touched seemed to glow” (Margalit).

Like Margalit’s mother, my mother was also diagnosed with cancer. My mother had throat cancer, a very rare form that attacked her vocal chords. My mother like Margalit’s has symptoms that seemed like they wouldn’t be serious or cause any major health problems. My mother had a sore throat, difficulty talking, and she was very lethargic. She went to the doctor because she thought she had strep throat but after a few tests they knew that it wasn’t strep throat. Being told my mom had cancer was terrifying. I felt similar to how Margalit felt. I just wanted to scream and cry because I couldn’t believe it was happening.

I was much younger than Margalit when my mom was diagnosed with cancer so I feel like I didn’t understand fully what was wrong with my mom but I was still very scared. As I got older I started understanding more about what cancer was and how there was no cure so my mom would never recover My mom spent a lot of time in the hospital. That caused my family to not be a “typical” family. Most nights were spent at the hospital with her. My sister and I would take our backpacks with us and do our homework there. Countless meals were eaten in the hospital cafeteria or in the car on the way to the hospital. Many nights we would only be home to go to sleep and the next day we would be back in the hospital with her.

Margalit and I both had mothers with cancer and both of our mothers passed away from cancer. Although they are similar situations the way that we both dealt with those situations were completely different. Margalit didn’t really let it stop her from living her life. She was grieving through literature. She had a hard time expressing her thoughts so she found books and quotes that helped her to express herself. Margalit accepted her mother’s death right away, I on the other hand didn’t. I couldn’t believe that my mother was gone.

I did know from the beginning of her diagnosis that she would eventually pass away but I didn’t want to believe it when it actually happened. I didn’t want to eat or watch TV or go to school. I didn’t ever want to read books again because that was something we always did together. It took me a while to get back into the swing of life after her passing but eventually I was able to get through the day without crying. I still think about her every day and I try to make all the decisions based in my life on if it would make my mother proud or not.

In conclusion, losing a loved one is never easy. Ruth Margalit and I had similar situations to each other but they were still very different from each other. Most people have already gone through it or will go through it at some time in their life. It’s not easy for anyone. Nobody goes through exactly what you will go through but there will be people out there who will go through something similar. 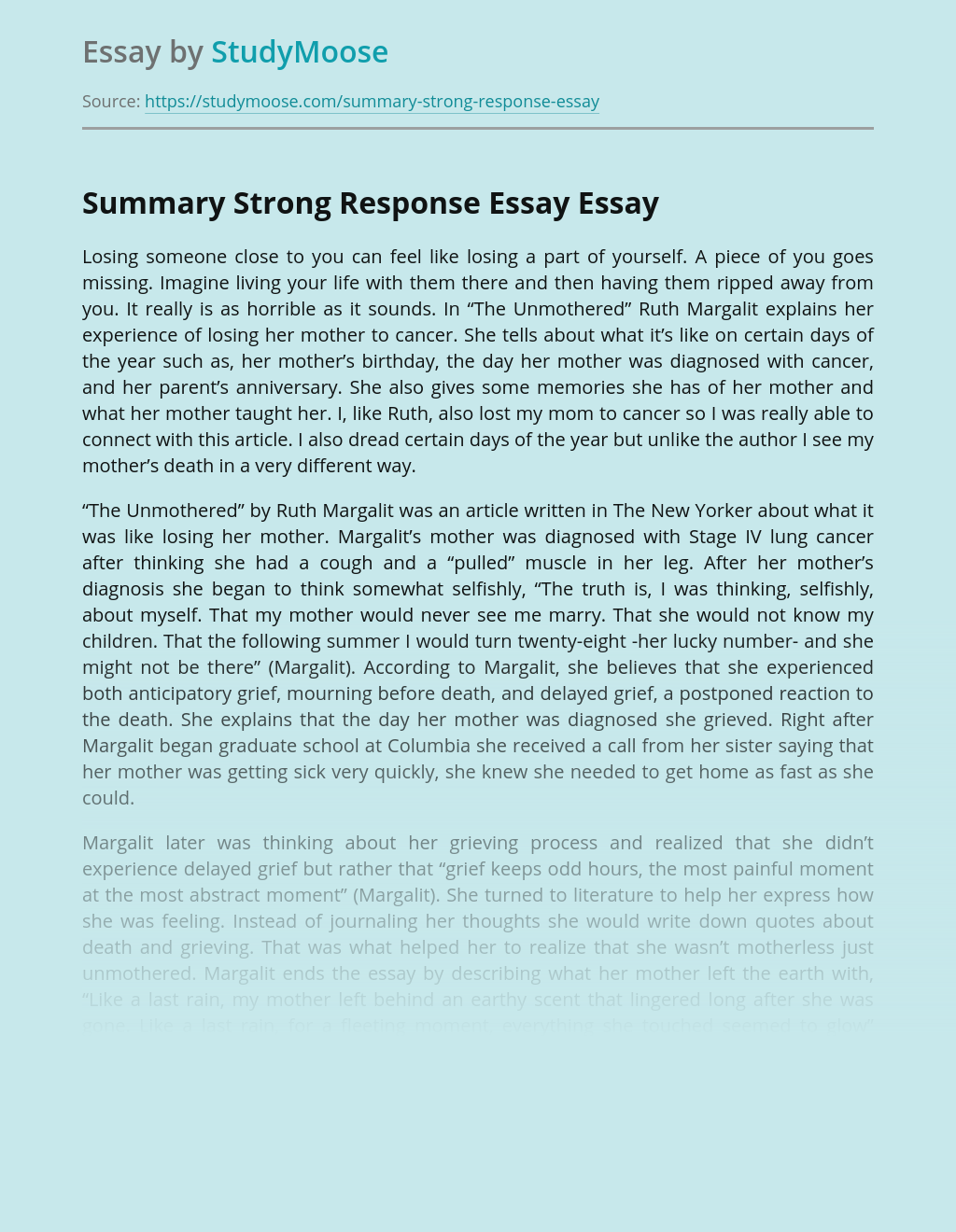 Turn in your highest-quality paper
Get a qualified writer to help you with
“ Summary Strong Response Essay ”
Get high-quality paper
Helping students since 2015
Stay Safe, Stay Original