Most people have manifestations of fear and sadness relating to human distress and report to seek counselling or drug treatment for common emotional difficulties such as phobias, loss of a job, bereavement and terminal illnesses. Medically these emotions are classed as ‘anxiety or depression’ and defined as ‘mental health problems’ (Barker e t al, 2010).This essay will address the causation and increase in the diagnosis of anxiety and depression and how counselling and psychotherapy is effective in its historical context. Most importantly the essay will look at the medical treatment and the role of medicine in the biopsychosocial perspective to address mental health issues.

Don't use plagiarized sources. Get your custom essay on
“ Summarise and Discuss Presentations of Mental health ”
Get custom paper
NEW! smart matching with writer

Taking into account research figures in relation to the newspaper articles by David Batty (The Guardian, 2011) and Janet Street-porter (Daily Mail, 2010).

The two newspaper articles argue anxiety and depression are becoming very common mental health problems in the population of the UK. Effecting 11.2 per cent women (The Daily Mail, 2010). Whilst the use of antidepressants has risen by more than a quarter in just three years in England (The Guardian, 2010).

More people are reporting of suffering from depression than ever before due to economic crisis, financial uncertainty and having busy lives (Batty, 2011 and Street-Porter, 2010). Therefore tough economic times have contributed to more people experiencing mental health problems (The Guardian, 2011) particularly in the north-west which had the highest antidepressant use in 2010-11 with 7.2m prescriptions dispensed (Batty, 2011) compared to people living in the City of London (Street-Porter, 2010).

It is noted anxiety and depression are forms of distress generating psychological benefits not recognised by the sufferer (Pilgrim, 2010).

Therefore experiencing feelings of fear and sadness are generally normal and appropriate responses to life events. Thus diagnostic words of anxiety and depression are used (Excerpt 1, 2010) challenging diagnostic labelling (Barker et al, 2010). That is regarded as a fashion label associated with a medical condition amongst the middle classes, highly successful well off women and celebrities (Street-Porter, 2010). For example madness is reframed as ‘biopolar disorder’ as discussed by Steven Fry (Except 2, 2010). Misery reframed as ‘common mental health problems’ as Trisha Goddard discuses of having a stigma attached with mental health problems (Excerpt 2, 2010).

Therefore being given a mental health diagnosis of depression or anxiety is experienced differently by people “as it cuts off all other diagnosis” (Excerpt 2, 2010) in that a person is not to blame for their feelings. While not being diagnosed or not wanting a diagnosis meant that a person was somehow responsible for their own emotions and well- being. So “failure to tackle depression hurts us all that make a misery of the lives of sufferers, costing the NHS in time, medication and hampers business by forcing some people out of work” (The Guardian, 2011) due to depression. Therefore losing £8.97bn in potential earnings a year costing the economy nearly £11bn in National Health Service care and drug prescriptions (The Guardian, 2011).

Moreover David Healy (Excerpt, 4, 2010) says culturally the kinds of problems that get treated as an illness nowadays are not the kind of problems that would have been recognised as an illness in the past, that are diagnosed as clinical depression. Recent examples of the causation of atheoretical mental illnesses are provided in the Diagnostic and Statistical Manual of Mental Disorders (Pilgrim, 2010). That focuses on agreed symptom checklist to label ‘depression and anxiety’ used today by counsellors and psychotherapists. Subsequently, this has increased the diagnosis of mental illnesses in people who are being referred from GP’s to counsellors or psychotherapists over time due to the flaws in the DSM- IV diagnostic (APA, 1994, cited in Pilgrim, 2010) criteria used to define mental health problems. Therefore prescriptions for anti-anxiety drugs rose from just over 6m to 6.5 m in the same period while prescriptions for sleeping pills rose 3% from around 9.9m to 10.2m.

Additionally the other effects of increase are due to pharmaceutical industry promoting their drugs on treating the symptoms of a condition for diagnosis rather than the cause (Excerpt 4, 2010). So drugs prescribed for another medical condition such as high blood pressure can have psychological effects causing depression (Toates, 2010). Nonetheless the National Health Service information centre says prescriptions for antidepressant increased by 28% from 34m in 2007-8 to 43.4m in 2010-11 and prescriptions for antidepressants such as Prozac increased from 34m in 2007-08 to 43.4m in 2010-11(The Guardian, 2011).

However, “psychiatrists, therapists and clients are divided on the benefits and drawbacks of using medication to treat people with profound depression or anxiety” (Excerpt 3, 2010). According to the biopsychosocial perspective that is parallel to the patient’s psychology, biology and social context. Notes drugs target the biology of the brain relevant to the psychopharmacology employed. The psychological effects are ‘psychoactive’ from medically prescribed and illegal drugs affecting the brain and the conscious mind; altering the activity at synapses due to different drugs having different effects (Toates, 2010). Therefore if the drug is effective the psychology and the social context the psychological intervention alter the brain and social context, thereby affecting the biology of the brain without the drug (Toates, 2010).

However whatever the defence it is argued that biological intervention should not be seen as the first line of defence (Toates, 2010) and categorising mental illnesses obscures the biographical and social complexity of human distress (Pilgrim, 2010). Effectively this has “linked to an increase in the number of people with the illness” (The Guardian, 2011) and “research by the House of Commons found the cost to the NHS of treating the illness is more than £520m a year” (Batty, 2011). As a result a study by Layard on the Depression Report (2006b) highlighted the extent of anxiety and depression impacted people claiming incapacity benefits which led to the Department of Health to increase the availability of mental health therapies (Barker et al, 2010). In which the client and therapist might meet for 15 to 20 sessions to work through the emerging material to help the client to develop a deeper understanding of inner conflicts and dilemmas (Excerpt 6, 2010).

The National Institute for Clinical Excellence guidelines (NICE, 2009) stated that psychological therapy is as effective as drug treatment in the short term and beneficial in the long term and the last government decided that the NHS make counselling available for a whole variety of mental illness ranging from stress, depression to panic attacks and low self- esteem (The Guardian, 2011). For many people ‘the talking cure’ (Parker, 2010) is a lifeline enabling them to manage their mental health problem (The Guardian, 2011). Therefore huge numbers of people are seeking the services of counsellors or therapists at some point in their lives (Barker et al, 2010). As improved awareness in the media by celebrities such as, Stephen Fry and Trisha Goddard (Excerpt 2 and 3, 2010) have spoken about their emotional experiences of drug treatments and different therapies.

However not all people who are suffering anxiety or depression choose to be treated therapeutically and with antidepressants that affects one in six people in Britain (Barker et al, 2010). Many people choose reading self-help books on people’s experiences on mental illnesses as Jim Brown chose to (Excerpt 1, 2010).Or through counselling helplines such as Samaritans and ChildLine. Many people also use alcohol and recreation drugs to treat their emotional difficulties as an alternative treatment (Excerpt 2, 2010).

In Conclusion this essay has described and summarised concepts of anxiety and depression in relation with the two newspaper articles. The historical theory classified ‘medical naturalism’ established by Emil Kraepelin on the increase of anxiety and depression. The biopsychosocial perspective showed the pros and cons of the use of drugs and therapies in treating mental illness and the DSM criteria discussed the diagnostic labelling of mental illness and how labelling impacts people emotionally that are based on understanding human distress complementing or conflicting with each other. 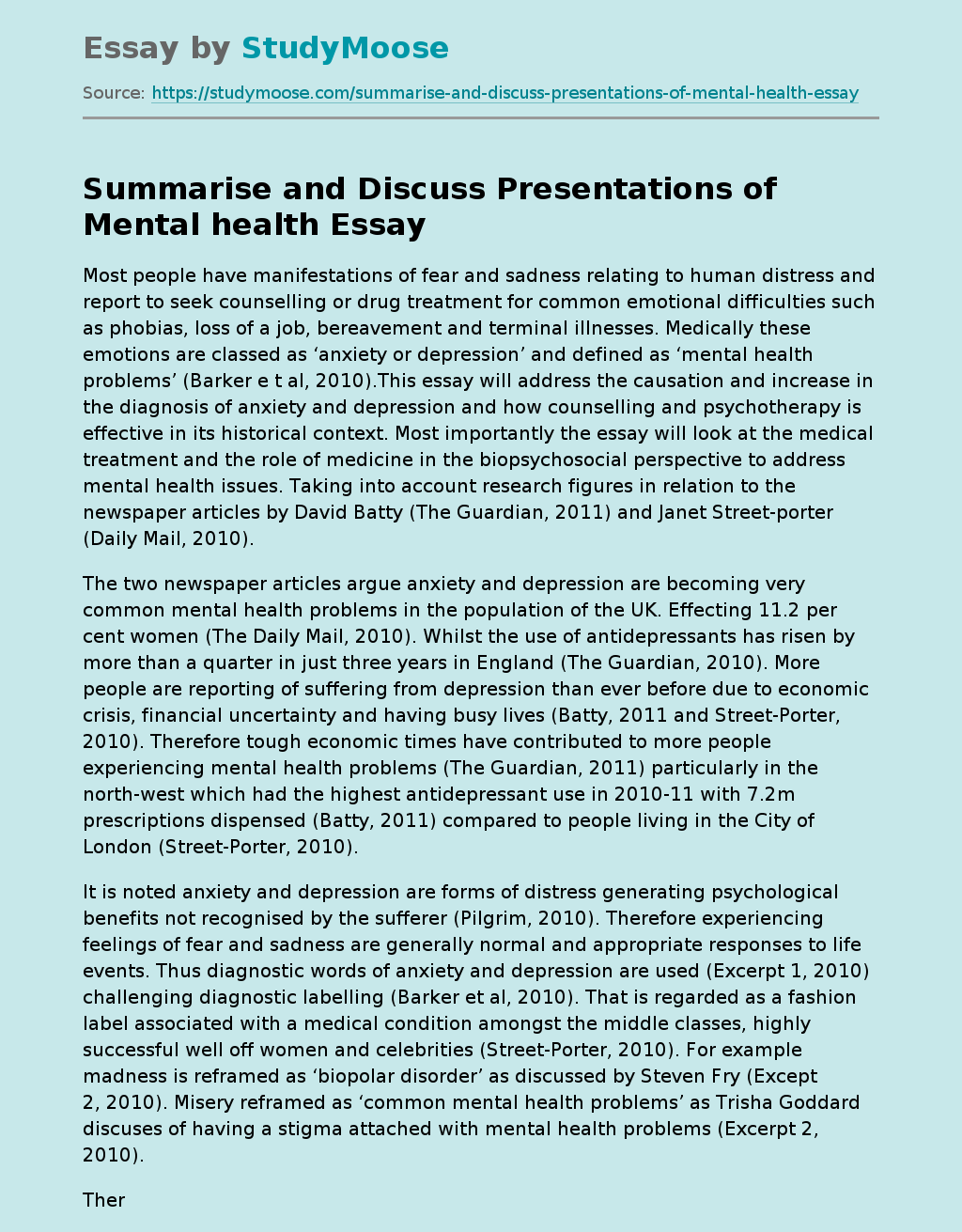