The act of suicide is a common issue some contemplate when facing hardships and troubles in life. These acts and thoughts are caused by issues of death, heartbreak, and depression which some may not be able to cope with. As in many plays from the era of Elizabethan England, the theme of suicide is abundant in the majority of Shakespearean dramas for example, Shakespeare’s tragedy ‘Hamlet’. Many of the ideologies that were believed at this point in time were heavily shaped by their religious beliefs and had severe consequences.

This theme is often discussed among the characters. Hamlet speaks about suicide on more than one occasion, whereas Ophelia actually leads herself to commit the act. Even though the choice of suicide ultimately lies in the hands of the beholder, it is not considered to be a legitimate way out.

Through further examination of the issues leading up to suicide and suicidal thoughts portrayed in the play, Hamlets’ views on suicide, and Ophelia’s act of suicide, it will be determined that it is not a justifiable way out.

Hamlet, the protagonist of the play, is a Catholic and to commit suicide would clearly be against his religion. Yet Hamlet seems to be more concerned with what the nobler thing to do is, “whether tis nobler in the mind to suffer the slings and arrows of outrageous fortune, or to take arms against a sea of troubles, and, by opposing, end them” (3.1.58-61). If Hamlet committed suicide then it would not be a noble act and he would gain nothing for failing to avenge his father’s death.

If Hamlet were to take his own life, then he would “sleep” and by sleeping he believes he would put an end to “the heartache and the thousand natural shocks that flesh is heir to” (3.1.63-64). The pain that he feels would be put to an end. This may be an easy way to end the pain but it is far from noble. In the famous soliloquy in Act III, ‘To be or not to be’ (3.1.57), a hurt and torn side of Hamlet is presented as he is distraught by the actions which have recently taken place. He has lost his father and his mother has betrayed him by marrying his uncle, who just may be his father’s murderer. Hamlet is a confused and fearful young man, who would rather choose the easy way out, away from the pain as many in our contemporary society would consider given the same circumstances.

At the same time, Hamlet realizes there would be no justice paid, nothing accomplished if he was to ignore what is going on. Suicide is expressed in Hamlet as a result of real emotions. It is an option, but not necessarily the right thing to do. We see Hamlet as a real man who wants to escape the pains of reality but understands the need to live. It would be better to live and be noble, than to run from his emotions. He has a duty to carry out and that is what he chooses to do. After the death of her father and the rejection from Hamlet, Ophelia is driven to insanity and ultimately plunges from a tree branch into the river and drowns. Because suicide is a mortal sin, the gravediggers wonder whether Ophelia will be ‘buried in Christian burial when she wilfully seeks her own salvation’ (5.1.1-2).

While whether her death was purposeful or not the gravedigger continues to say ‘if I drown myself wittingly, it argues an act. And an act hath three branches—it is to act, to do, to perform. Argal, she drowned herself wittingly.’ (5.1.9-11). Ophelia’s funeral procession is short and modest as the priest articulates that her death was suspicious. Without her royal ties, Ophelia would have been buried in unsanctified ground. The modern perspective on Ophelia’s death does not change much to that of the Shakespearean era. Self-murder is still a very tragic, saddening and shocking event that the majority of our contemporary society believe is not a justifiable way to die. It is considered a selfish easy way out and hurts the people around you; mostly family and close friends.

In conclusion the Shakespearean tragedy, ‘Hamlet’, explores many philosophical ideologies, including the unpardonable act of suicide, by using the culture and beliefs thought at the Elizabethan era. Through Hamlet’s continual contemplation of suicide and Ophelia’s act of suicide, it can be seen that although it may be seen as the easiest solution, the effects can distress those around you; in Hamlet’s case, the emotional affects and eventual death of his family. Suicide provides a permanent solution to a temporary problem. 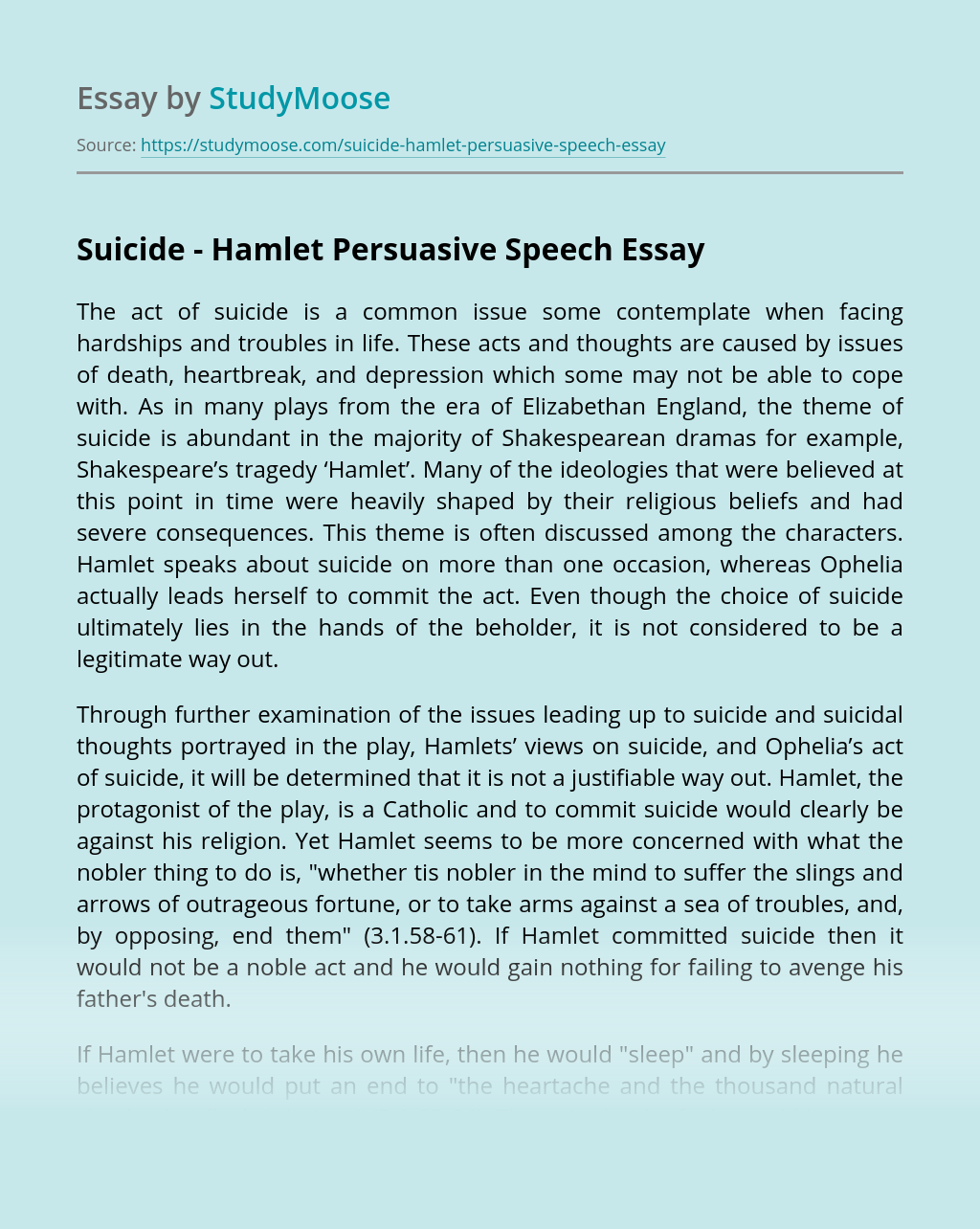