Struggles in “Fences” by August Wilson

In “Fences” by the playwriter August Wilson, introduces the Maxson’s family and friends with struggles of meeting the standards of the American family dream with hardship. The time frame of this drama was in the 1950s-60s. Blacks lived in segregation throughout the country. In the 50s social welfare system were starting to change. America in the 50s supposed to help the disadvantaged (i.e. families that live in poverty, African Americans and minorities) that were neglected with communities suffering and being neglected.

Don't use plagiarized sources. Get your custom essay on
“ Struggles in “Fences” by August Wilson ”
Get custom paper
NEW! smart matching with writer

These minorities were exposed to racism. Racism were more open strongly against those that was less fortunate than the Caucasians at the time. As time moves through the 60s, the revolution in the black communities and social welfare started to change. The minorities and families in poverty started getting better education and job opportunities. The characters of the play all in a way develops a change in themselves throughout the play expect Troy. Troy’s structure of a character did not change, Troy was found to be a strong proud man and yet stubborn.

Throughout the play Cory played football while in high school. Troy and Cory did not see eye to eye when it came to Cory’s future with football. Troy seemed to envy Cory because he was not able to play baseball due to him being too old for the league. Cory also believes that Troy doesn’t like him because the way Troy disagrees with him and causing him to quite football for a job.

Despite of Cory wanting a relationship with his father, Troy is hesitant to show and affection toward his son because of his pride.

Before Troy came out with the truth of him cheating on Rose with Alberta, Troy would brag about his marriage with Rose to Bono. “I got out that place, say, ‘Hitch up my pony, saddle up my mare… there’s a woman out there for me somewhere. I looked here. Looked there. Saw Rose and latched on to her’” (p.1034). After Rose found about her husband cheating, her life goals and possible success were destroyed. She felt betrayed by the only man she invested her life and time into. “I took all my feelings, my wants and needs, my dreams… and I buried them inside of you. I planted a seed and waited and prayed over it.”

Throughout the play Troy was always proud of his actions. A few moments of Troy showing his pride was telling Rose about his affair with Alberta, explaining his role as a father and his responsibilities to Cory, and talking to Rose and Bono about his job promotion. Troy expressed his feelings about his affair with Alberta. Troy says “She gives me a different idea… I can step out of this house and get away from the pressures and problems (p. 1070).” Sheri Metzger, author of “An essay on Fences,” contends that “The relationship that Troy forges with his wife, Rose, also proves to be limited by his experience in baseball” (par. 7). Troy accepted his responsibilities and understands his role as a father and husband. He is reluctant to providing money for his family as they ask for and need.

The fence Troy was building throughout the play represents his boundaries. In the Act II Scenes III and IV, Troy takes on the role of being a father to his daughter with Alberta but realizing the fence was a restriction in his life. Troy believed he feared the fence being put up t cut communication/ social with the world.

Troy’s last moment before his death in the yard swinging the baseball bat. In Act II Scene V, Rose told Cory that his father swung the bat then stood with a smile on his face before falling over and passing away.

In conclusion, the character Troy is viewed as a person that was open minded that did wrong doings but had good intentions at heart. In the modern world, Troy persuade as a combination of a tragic hero and a villain. The way Troy provided and protected his family was heroic but the actions he did towards pushing them away was evil. Many of the audience would find that Troy honesty was upsetting because he spoke what he felt although, Troy’s honesty was why the other characters loved him. Even though Troy and Cory had an altercation, Cory still manages to put his difference aside and attend his father’s funeral. Troy’s spiteful decisions for Cory’s life left his son feeling as if his father did not like him. When Rose was talking to Cory before leaving for Troy’s funeral, Rose told Cory “Your daddy wanted you to be everything he wasn’t… and at the same time he tried to make you into everything he was. I don’t know if he was right or wrong… but I do know he meant to do more good than he meant to do harm” (p.1086).

Struggles in “Fences” by August Wilson. (2020, Sep 13). Retrieved from https://studymoose.com/struggles-in-fences-by-august-wilson-essay 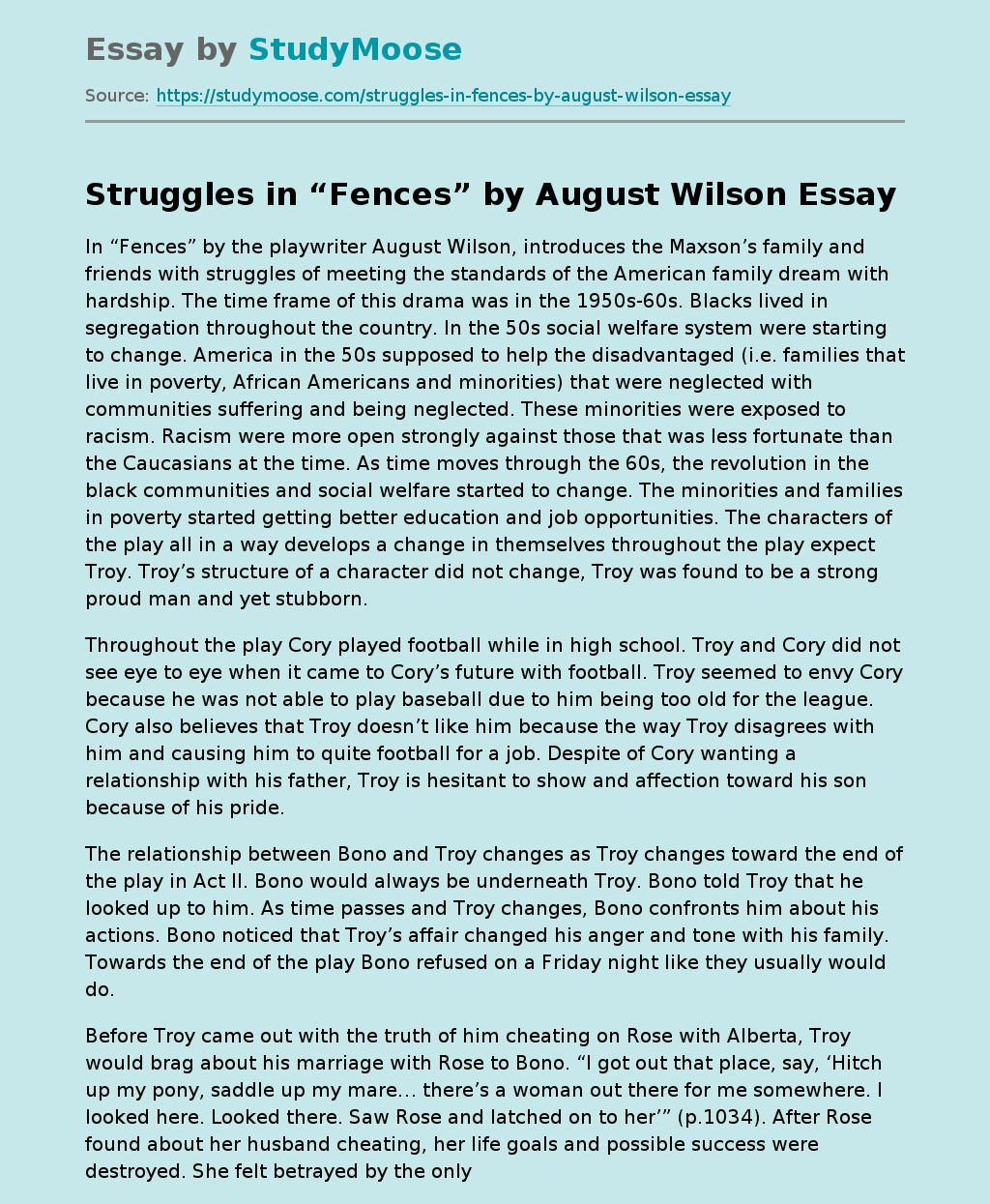