Structural and Physical adaptations of cereals

“Cereals form an important part of the human diet. Different species of cereal show structural and physiological adaptations which enable them to grow in different parts of the world.”

Cereals crops are members of the grass family that are cultivated and harvested for their grain. These crops provide more energy than any other crop, forming the basis of traditional diets around the world. Cereal crops are high in carbohydrates and in some third-world countries, their grains make up the poor people’s diets.

Don't use plagiarized sources. Get your custom essay on
“ Structural and Physical adaptations of cereals ”
Get custom paper
NEW! smart matching with writer

Rice is the main staple food of people in the far eastern Asia. The cultivations of this crop are usually situated in areas where there is a low-labour cost, humid temperatures and high rainfall. There are two types of growing rice. One type is known as lowland rice where rice is grown in paddies (flooded plains). This is so that the roots could make use of the nutrient content from the water where it is growing.

The other type of rice cultivation is called upland rice. This type is used in areas where there is insufficient amount of moisture to cultivate the rice crops. Upland rice produces less varieties of rice because of the inadequate nutrients available.

Rice has many physiological adaptations that allow them to grow in areas mentioned. One adaptation includes the large air spaces that run along the length of the stem. This allows oxygen to diffuse through to the roots that are immersed in water. In addition, the roots of the rice crop are shallow which makes the absorption of the oxygen that diffuses into the surface layer of the soil easier.

Furthermore, the root cells are able to respire anaerobically when oxygen levels fall too low. As a result, the cells release ethanol – a chemical that rice root cells have a high tolerance to because they have a high number of enzymes called alcohol dehydrogenase.

Another cereal crop that is vital in people’s diet around the world is maize. Maize is also known as corn in some parts of the world. It is grown in Central America and the tropics where the temperature and light intensity is high. With the high temperatures, the rate of transpiration increases and thus leads to the closing of the stomata. Consequently, oxygen from photosynthesis starts to build up in the leaves decreasing the photosynthetic field.

Like rice, maize also has many adaptations. The roots have adapted so that they are shallow, producing smaller aerial roots at the base of the stems that help them withstand the strong winds.

Sorghum is another important cereal crop grown throughout the world. The plants are cultivated in high temperature regions of Africa and Asia. It is called a Xerophyte plant (plants found in dry conditions) because sorghum has a tolerance to drought and heat, meaning it is able to grow in arid regions such as central India and Africa. In these regions, sorghum is made into a tasteless porridge, where it is often a staple food. In other regions of the world, the cereal crop is commonly used as animal feed or as a source of oil or fibre.

One of the main adaptations of sorghum is its ability to grow in hot, arid, low-soil nutrient conditions. It has also adapted to endure high temperatures by producing special ‘heat-shock’ proteins swiftly as temperature rises. Sorghum also has a dense root system that makes it efficient at extracting water from the soil. They also have thick waxy cuticle that prevents evaporation from leaves which could result to water loss. In addition, the plant also has motor cells on the underside of the leaf that causes the leaf to roll inwards in dry conditions, trapping moisture and reducing water loss. Furthermore, it doesn’t have many sunken stomata, reducing openings in which water vapour can diffuse.

In conclusion, cereal crops are grown in areas of extreme climates. They have evolved to suit the climate in which they are grown, allowing better yields and solving the increase in demands of these staple foods in different countries where they are seen as important part of the population’s diet.

Structural and Physical adaptations of cereals. (2020, Jun 02). Retrieved from https://studymoose.com/structural-physical-adaptations-cereals-new-essay 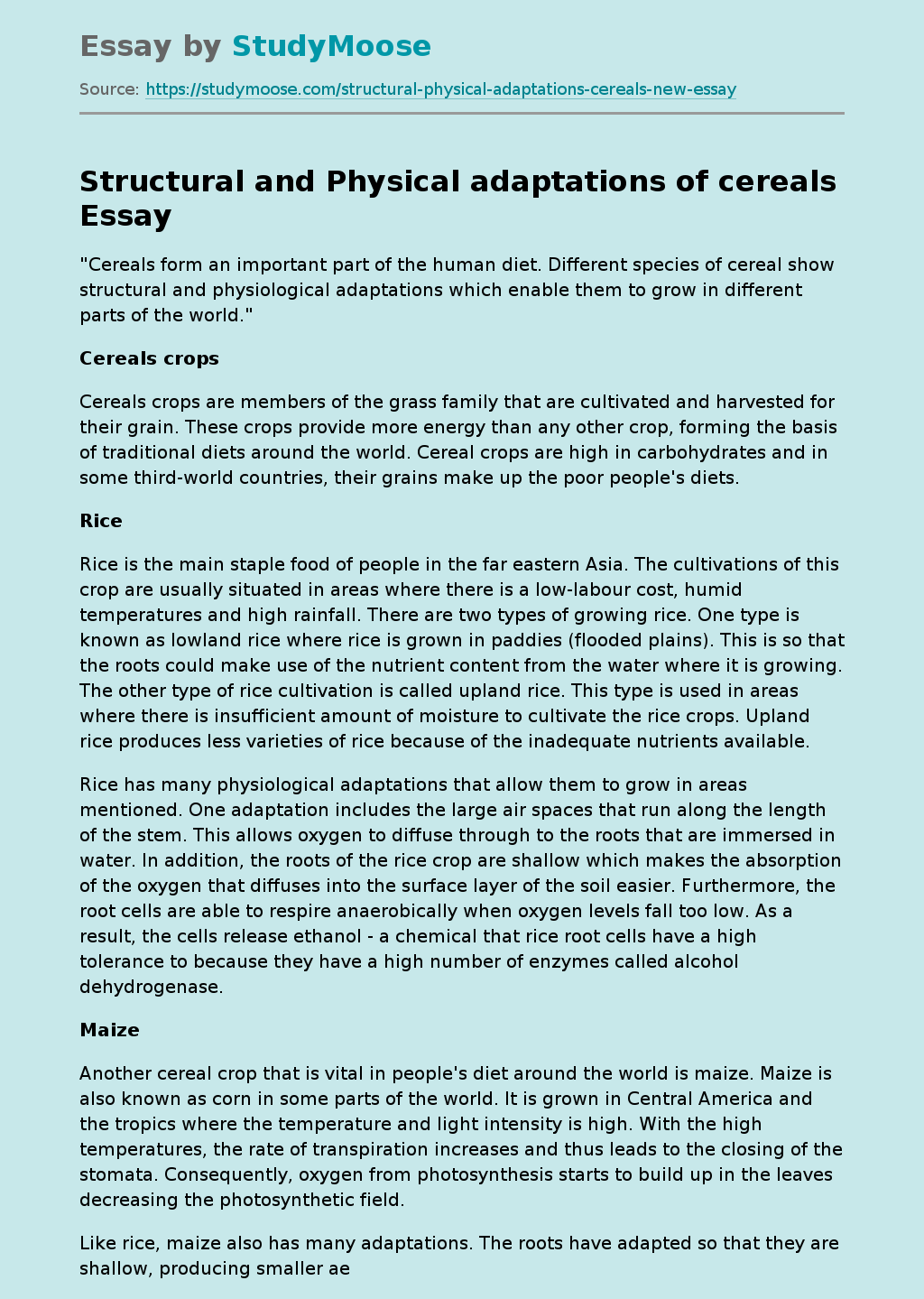