It is a well known fact that statistics can be misleading. They are often used to prove a point and an easily be twisted in favor of that point. Statistics, graphics and database are used in medical field to approve, prove or disapprove theories, analysis and interpretation of ailments, medications and its impact and treatment and its effectiveness. As noted by Nursing Research (2011)/ “Health Information is very often explained in statistical terms for making it concise and understandable (Basic Statistical Concepts, 2011, para.

Don't use plagiarized sources.
Get Your Custom Essay on Statistical methods in medical research Just from $13,9/Page

1). Statistics play a large role in research and just like anything statistical data can be misrepresented. Data can be misguiding if the sampling is not done properly.

The misrepresentation of data can occur unintentionally as a result of human error or intentionally through bias misleading. (Graphical Misrepresentation, 2006) Unintentional misrepresentation can occur through bad sampling which is usually conclusive of sampling a small group in order to represent characteristics of a larger group or population. (Basics Statistical Concepts, 2011). One thing that can easily cause misrepresentation in data is the difference between association and causation—although “variables may be affected by a knowledge of another, does not mean that one variable causes another (Armitage, Berry, & Matthews, 2008).

For example this may be seen in the last presidential elections. If 100 people in Indiana were asked who they were going to vote for during the past presidential election and the majority (60%) said Romney, this data could be turned around to represent the nation saying that 60% of the people plan to vote for Romney when inevitably we learned that Obama took the win.

Question 2
What are the characteristics of a population for which it would be appropriate to use mean/median/mode? When would the characteristics of a population make them inappropriate to use? Answer:
The mean is the arithmetic average of all numbers; the sum of all values divided by the total number of values. The median is the middle value in a set of numbers arranged in order of magnitude. The mode is the value that
occurs most often. Appropriateness of each measure:

1.Arithmetic mean is used when –

Inappropriateness of each measure:

It is inappropriate to use the mean to summarize nominal and ordinal data. If the distribution is skewed or has some outliers, the mean will be distorted.

It is inappropriate to use the median to summarize nominal data.

The mode may not exist. 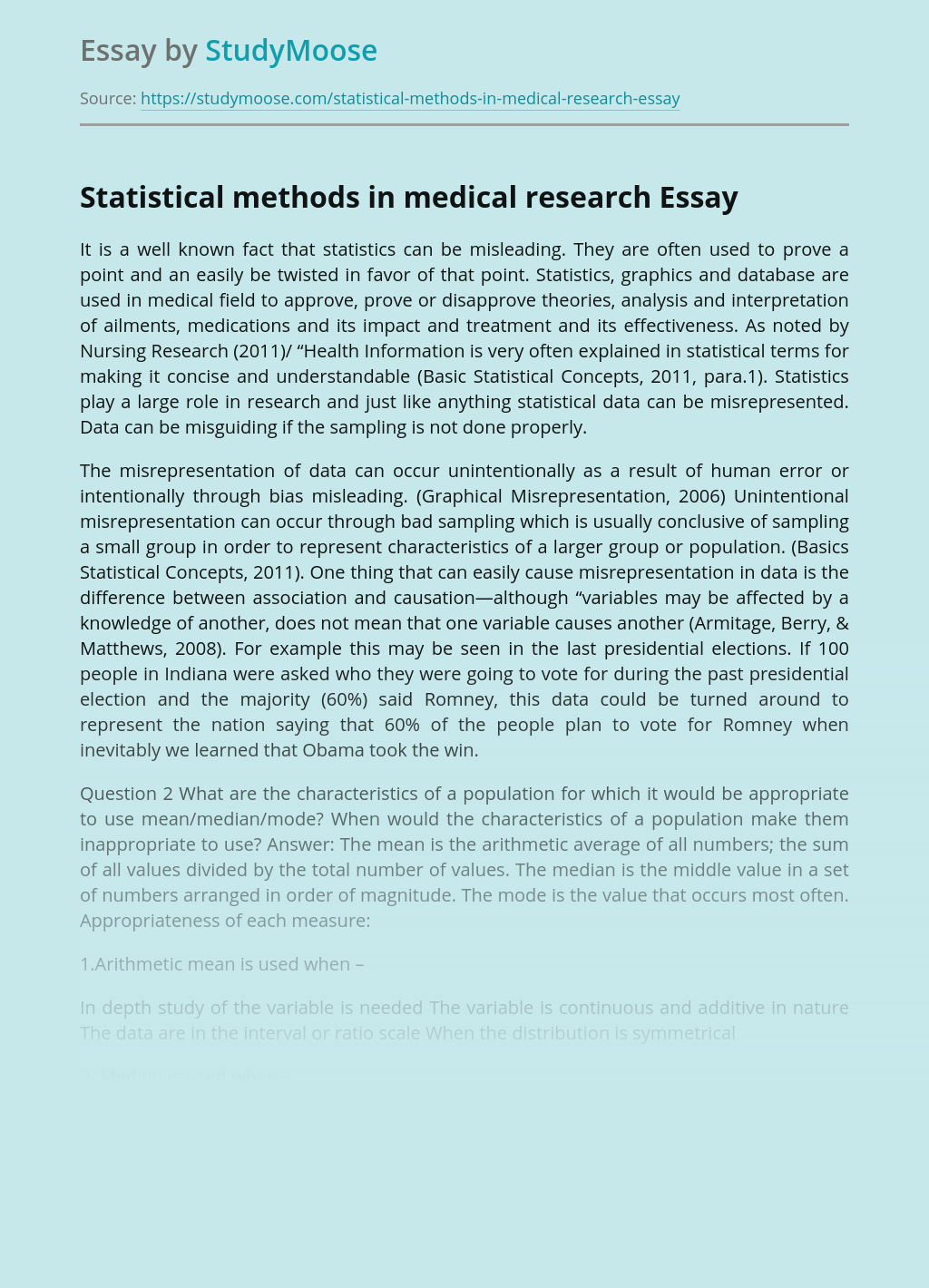 ‘Anna Frith, a women who had faced more terrors than many warriors…’ It is the women in the text that prove to be stronger in the face of adversity. To what extent do you agree? Geraldine Brooks’ novel ‘Year of Wonders’ discovers the strength of women throughout the year of the bubonic plague in 1666....

Morality without religious belief is impossible

Many would agree with the statement that morality without religious belief is impossible, because religions provide an unchanging moral code whereas secular morality varies depending on society and culture. Documents such as the Decalogue transcend time, but constitutions and laws of man are constantly being amended and reviewed. Morality without God is merely subjective; two...

Freud believes that it is part of everyone’s personality to seek pleasure through violence; it is part of the “ID.” However, the ego negotiates between the ID and superego, meaning the majority of people can regulate between the morals of society and their own pleasures. I agree with this, as does Sara Shepard, the author...

The following are the most important factors that influence moral development; Family, which takes four influence forms; the family’s behaviour acts as a model for the behaviour of the child, who imitates what he observes in others. By the use of approval or disapproval, reward or punishment, the family teaches the child to behave in...

Kant’s critique of Utilitarianism is that it treats people as a means not as an ends in themselves. Since he is a deontologist he presumes that there is a universal moral imperative, certain ways in which we must act, no matter what our individual desires or needs or utility might be. The Categorical Imperative is...