"Spring" by Edna St. Vincent Millay and the "Sick Rose" by William Blake

The first poem is called, “Spring,” by Edna St. Vincent Millay and the second poem is called, “The Sick Rose,” by William Blake. The two poems are similar in the way that the personas express their feelings towards life. Beauty, the seasons of life, and the meaning of life are the focuses of both poems.

Don't use plagiarized sources. Get your custom essay on
“ “Spring” by Edna St. Vincent Millay and the “Sick Rose” by William Blake ”
Get custom paper
NEW! smart matching with writer

The narrator of the poem seems really depressed because of the way she expresses her attitude towards life. In the very beginning of this poem the narrator is asking what the purpose of life is. So from the start this poem seems to be very gloomy. We seem to ask what the meaning of life is more, when we are sad, depressed or maybe something/someone has turned against us; Like in the poem, “The Sick Rose”. In this poem the narrator says, “O Rose, thou art sick! The invisible worm, That flies at night, In the howling storm.

When the narrator says, “That flies at night,” this just emphasizes even more about how small and invisible this worm is.

When it is dark outside you can hardly see anything, so it would clearly be impossible to see something invisible. I think that what this poem is trying to portray is, that we as human beings are very tiny compared to the whole world and that we as individuals are invisible. So in theory, I think that this poem is about how the narrator thinks that one person can’t make a difference in life. In a way this is similar to the first poem because the author has a negative attitude towards life and does not think highly of it, “Life in itself Is nothing…” Both poems have a very negative outlook on life. Although there is one major difference and this comes at the end of both poems. Though both may seem to end on a negative note, “Spring” (the first poem) seems to end more positively, “April comes like an idiot, babbling and strewing with flowers.” In the end of the poem the narrator seemed to end negatively but yet still recognized the beauty in life.

In, “Spring,” the narrator feels that she is not beautiful enough. I think that she is trying to portray that everyone wants to be beautiful but not everyone is going to be. This is similar to, “The Sick Rose,” because in this poem beauty is destroyed by love just like in the first poem when beauty is eventually destroyed because death is inevitable. Both poems show a different attitude towards beauty. “Spring,” ends by recognizing beauty while, “The Sick Rose,” ended by killing it.

Both poems have a ‘season’ theme. In the first poem the season is obviously Spring. The narrator in this poem “Spring” talks about the,” strewing flowers,” but she does not set the mood for spring. In this poem it is very depressing when it should be happy, with flowers blossoming, animals coming out of hibernation, leaves are just starting to bud on the trees, and so on. That is how Spring should be, but in this poem it is portrayed as the worst of all four seasons. In, “The Sick Rose,” poem the season must be Autumn because everything is gloomy, the leaves are falling off the trees, flowers are withering, and it’s always raining. The mood in this poem fits the season perfectly.

In conclusion, both poems discuss the meaning of life. The first ends more positively but they both still have negative attitudes. In, “Spring,” the narrator does not like beauty but by the end she changes her opinion while the second poem is interpreted as beauty being killed by those who love it. Both poems incorporate the seasons of life but the season fits the mood better in the second poem. True beauty and the meaning of life can only be discovered by actually living life itself. 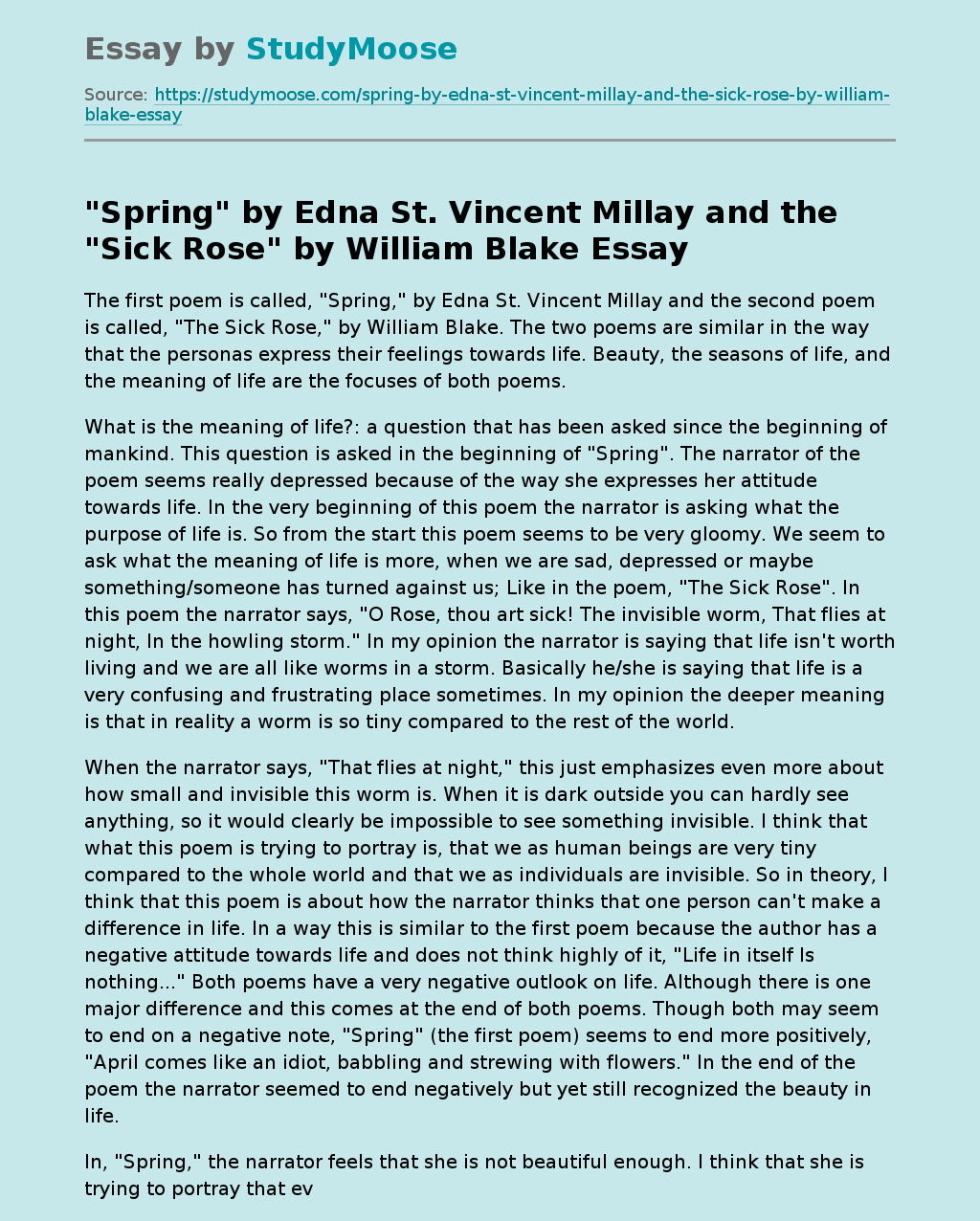