Spread of Christianity, Buddhism and Islam

New beliefs and practices were introduced to a wide variety of people by the spread of Christianity, Buddhism and Islam. Diverse people were integrated through a common bond with Christianity, Buddhism and Islam being the influential and spreading across the frontiers and borders of Afro-Eurasia to Middle East. The conversion to any of the three universal religions was enhanced by the capacity of each to adapt to the local situations.

The development of the religions took place at different places and period in time but they share some commonalities in the means of expansion whereby they spread across the frontiers and borders is a result of trade, pilgrims and missionaries (Jerry, 1993, pp.

Don't use plagiarized sources. Get your custom essay on
“ Spread of Christianity, Buddhism and Islam ”
Get custom paper
NEW! smart matching with writer

67). In the 16th century, Buddhism emerged in South Asia. It had spread to China by 200 BCE and in the following centuries it spread to Southeast Asia by maritime routes. Christianity was starting to spread in the Mediterranean at the same time the Buddhism was connecting Southeast Asia to China.

The time Islam was emerging and starting its expansion across the Arabian Peninsula, Christianity had already been established through Africa and Western Europe. It is found out that, despite the challenges in some of the expansion means faced, the universal religions have spread widely from their origins. Buddhism The first Buddhist community in India is not well indicated when it was established. The religion was promulgated across India by the grandson of Mauryan dynasty founder.

The teachings were also spread by Buddha followers after his death into northern India through trade routes to the East and west.

Moreover the religion spread to other places such as China which was enhanced by the establishment of the Silk Road in the second century BC, whereby pilgrims and missionaries started to travel between India, China and central Asia (Valerie, 1998, pp. 40). The mobility aided by the Silk Road was first taken advantage of by Buddhism missionary faith hence the religion spread beyond its native grounds.

By the first century BC, Buddhism had spread to Pakistan and Afghanistan. The spread was aided by the establishment of temples and shrines whereby Monks and Priests preached to the passing traveller and local populations hence the faith spread rapidly. The Monks were ready to adopt and adapt local beliefs hence so many people accepted their teachings. Buddhism had written texts translated into local languages hence the converts who made pilgrimages to visit the land where Buddha lived were given the texts hence became influential in the expansion of the religion.

At the same time, establishment of Christianity was taking place in the western parts of the Silk Road which was transformed from a local phenomenon into a rapidly growing and proselytizing religion through the work of Paul and Christian apostles. Nestorian Christianity by 635 had spread through out Persia and India hence reaching the heart of China. Also the many of the churches were found along the Silk Road by mid 7th century. Christianity It is noted that spread of Christianity started six centuries after Buddhism.

Christianity was able to adapt to local beliefs, traditions and sacred places just like Buddhism hence won appeal among many people. After the death of Jesus, the religion gained support after the Roman emperor Constantine was converted in 312 CE. Trade routes in Asia, Europe and North Africa aided the rapid spread of Christianity. Some of the converts such as Charlemagne and Prince Vladimir of Russia were responsible for the aggressive expansion of Christianity.

It is considered that almost everyone in Europe had been converted to Christianity by the end of the first millennium (Ramsay, 1984, pp. 87). Islam Islam started in Arabian Peninsula six centuries after Christianity began. The spread of Islam began after the death of the Islamic prophet Muhammad. Muslim’s community was developed in the Arabian Peninsula during Muhammad lifetime through conversion to Islam. Dynasties in Muslim were developed and subsequent empires in India and Persia were among the powerful and the largest in the world.

The Islamic world consisted of many sophisticated centres of science and culture with broad mercantile networks, scientists, travellers, mathematicians, doctors, astronomers and philosophers who contributed to the Islamic Golden Age (Richard, 1990, pp. 39). The Muslim faith spread through missionaries and trade just like Christianity and Buddhism. Missionaries known as Sufis translated Islam message into local people whereby they had spread along the trade routes.

Pilgrimages in Islam were also significant just like in the case of Buddhism whereby those who visited the holy places of Islam their faith was renewed and brought texts back home hence enhancing the spread of the Islam faith. Islam spread as far as from Mecca, China and Indonesia. Indonesian archipelago people are thought to be the first to adopt Islam during the eleventh century though it is believed that Muslims had visited the place earlier in the Muslim era.

Through conversion, Islam by the end of the 16th century had overtaken Buddhism as dominating religion of Sumatra and Java people. Christianity and Islam were adopted by the people in the eastern islands in the 17th and 18th century that had largely remained animist. The increasing trade connections outside Archipelago enhanced the spread of Islam whereby the new religion was first adopted by the major kingdoms and traders and today Indonesia has the largest Muslim population in the world. Islam is the second largest religion worldwide with population ranging from 1. billion to 1. 9 billion Muslims. By the 7th century, the rise of Islam challenged the spread of Buddhism and Christianity whereby today it is the dominant religion in the countries linked by the old Silk Road. The Islam conversion stated on the 8th century in central Asia whereby the Buddhist wall paintings and statutes were destroyed and its stupas and temples were abandoned and forgotten which led to the decline of Buddhism. The entire central Asian basin had already been converted into Islam by 15th century.

The Islam development was enhanced by the establishment of mosques and it is considered that in human history no other religion has rapidly spread so far like Islam. Conclusion Despite the different places and period in time the three universal religions spread across. The fact remains that they used the same means in the development of their faith. The willingness of the religions to change through incorporating and adapting the beliefs and traditions of the local communities boosted the spread of their faith but the extent to which they did it is questionable since there was a possibility of compromising the religion’s faith.

Use of written materials as a means of spreading the word by that time is also questionable since people were not civilized and how many people had the reading skills? Trade, pilgrimages and religious interpreters were the best means of spreading the religions for many people could participate and understand hence they are the reason behind the extraordinary success of the three religions.

Spread of Christianity, Buddhism and Islam. (2016, Sep 23). Retrieved from https://studymoose.com/spread-of-christianity-buddhism-and-islam-essay 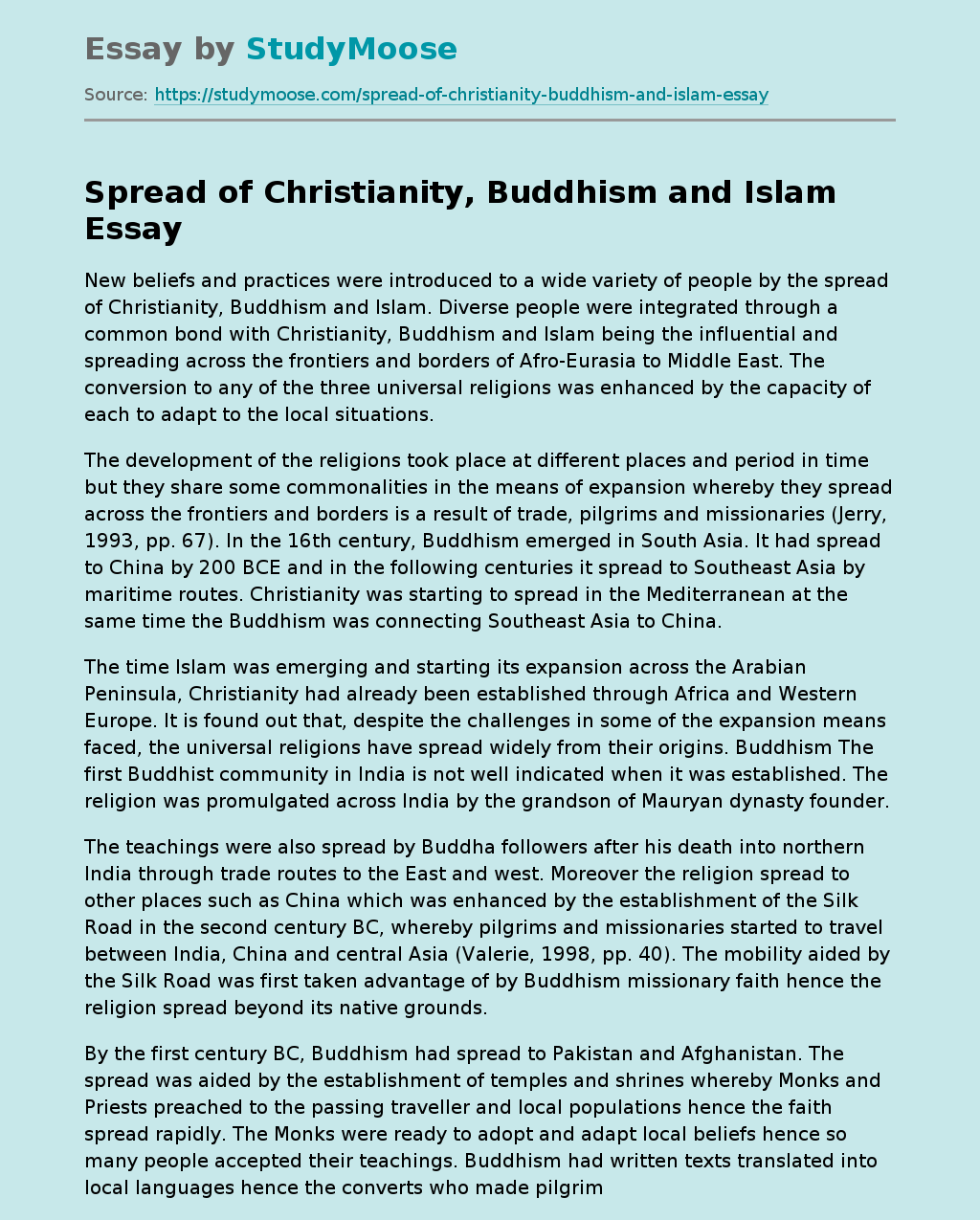