I attended a speech on Monday April 29th at Saint Thomas Aquinas’ rec room. The speakers name was Brandon Young, inspirational speaker. The audience was not very large, approximately 50 to 55 people were present. The name of the speech was “Why do you do it” and it was delivered to inspire you. To begin the speaker was very good at getting our attention by stating that he was not there to motivate us in anyway but, instead to ask “why”. His big point was “Why do you do the things that you do”.

Get a verified writer to help you with Speech Observation

What motivated us to do what we do, what was our drive.

He kept driving these simple questions ome that, for me, actually got me interested in listening to him because it got me to ask myself the same questions. Honestly I didn’t think I would be able to sit through the whole speech being as it was something I’ve never thought of going to sit through.

Right from the start he stated his reasoning for being there so that we were all on the same page throughout his presentation. What I could put together from listening was the point he was trying to get across was that our emotions play an integral part in our daily decision making. That if you were emotionally driven to ccomplish a goal, you would accomplish it no matter what circumstance you had to overcome to get there and if we weren’t committed emotionally, that seemingly impossible goal would always remain impossible.

Throughout his presentation he used power point to add to and back up his points while he was speaking. They were pretty bland in my opinion, they were all the same colors and same font with nothing that would make anything stand out. White backgrounds with black text gets tiresome to look at after a while. While being plenty large, maybe a bit too large since they were projected, they were ell written. If he changed the colors or added something, anything to keep from looking at a newspaper the whole time I would have felt a little more comfortable giving him more credit than I am. What I can say is that the timing of his slides went off without a hitch so it flowed while everyone was listening. As far as enthusiasm was concerned, he was definitely enthusiastic, very enthusiastic, maybe even a little too enthusiastic. I felt as if he was trying so hard to be upbeat and trying to convey his message to everyone in the audience, he was too uppity, too in your face.

His annunciation was vary hick in certain points in his speech like as if he really pronounced a word a particular way it would strike us deeper than if he just pronounced it normally. I mean don’t get me wrong he was good at what he did but, I think if he went any longer it would have just gotten annoying. Throughout the speech he kept asking us to “show some hands” whenever he presented a particular scenario we may have came across or were involved in. In all honesty he overused the “show some hands” line, it seemed as if he thought he was losing some attention he would just throw out a pretty vague question and say “show some hands” over and over.

Although he did keep his talking geared toward us in the audience instead of changing the subject to himself as I sometimes find myself doing. My personal opinion about his organization of his speech was fairly linear. Sometimes he would find himself getting a little off topic if he had to relate something he said to a personal experience of his, granted these were very limited throughout but, kind of distracting when they happened. I would have enjoyed listening much better if he would have kept the “off topic” out of the speech entirely but, to each his own. Since he was delivering his speech I had no place to interject.

I think it’s about time I talk about Brandon’s gestures, eye contact, posture etc. For the first two to three minutes he was pretty stiff. He kept rubbing his hands together as if he didn’t know what to do with them. His eyes would bolt around the room rapidly, obviously he was nervous but, as his speech went on he began to loosen up. Talking with his hands, keeping his eyes moving from person to person yet would pause on certain people almost as if he was conveying what he was saying at that point in time directly to that person.

Vocally he started off just a little low but, again, as time passed started to eel more comfortable and speak much louder and clearer. During his speech he would pace, side to side on stage before finally stepping down on the floor almost as if he felt he was closer to us he could connect to us better in a sense. His speech was aimed at a general consensus and was in no way pointed toward any particular age demographic or occupation which was nice. I didn’t feel so out of place that way. I felt as if I could relate to what he was saying as opposed to feeling out of place sitting in on his speech. My thought on responses are mixed. I got the feeling that most people were appreciative of what he had to say but, I lso felt like there were a select few that after listening to what he had to say, just blew him off or didn’t want to be intellectual to get into his presentation.

Obviously there will always be that percentage of people in this world that will go to something just to say they went, but won’t want to be bothered with being opinionated afterward to input their on thoughts. So for the most part, including myself, we the audience enjoyed what Brandon had to say. Honestly this isn’t the sort of thing I would find myself thinking of doing with my time but since the opportunity was presented I went with an open mind and ound myself entertained and involved. In his conclusion he asked us to explore our emotions to find which controls our actions and motivation. Now when he first said this, I didn’t get what he was trying to say right away until I let it sink in and really put some thought into it. I always enjoyed when anything ended on an off note and by that I mean something that is proposed that will either make you question yourself or make you want to change the way you think. Immediately that statement he ended on stuck in my head.

In closing what I would take away from Brandon’s presentation to help in my future resentations would be to just calm down. I know I said this before but, once I saw him get comfortable with being in front of us he really started to open up and get into his role. Sometimes getting a little too into it but, all in all he did a decent job. Again before I took this class I would never have thought about voluntarily going to see a speaker because I always thought they were biased, which many may be but, going to see Brandon speak in such a way about such an open topic was enlightening. Seeing someone else deliver a presentation like this helped me realize that talking in front of a crowd isn’t all hat bad in most cases. Learning where the line is and not to cross it will take time and come with experience which is where I find myself stuck when faced with a biased topic.

Taking a topic that plays both sides of the fence, like Brandon’s, may suit my style of delivery and deliberation better which I will now have to keep in mind from now on. I’m glad that I had to go see someone give a speech, it made me explore outside of my typical box and test waters I may never have done on my own. This assignment made me question why do I do what it is that I do.

Get a verified writer to help you with Speech Observation 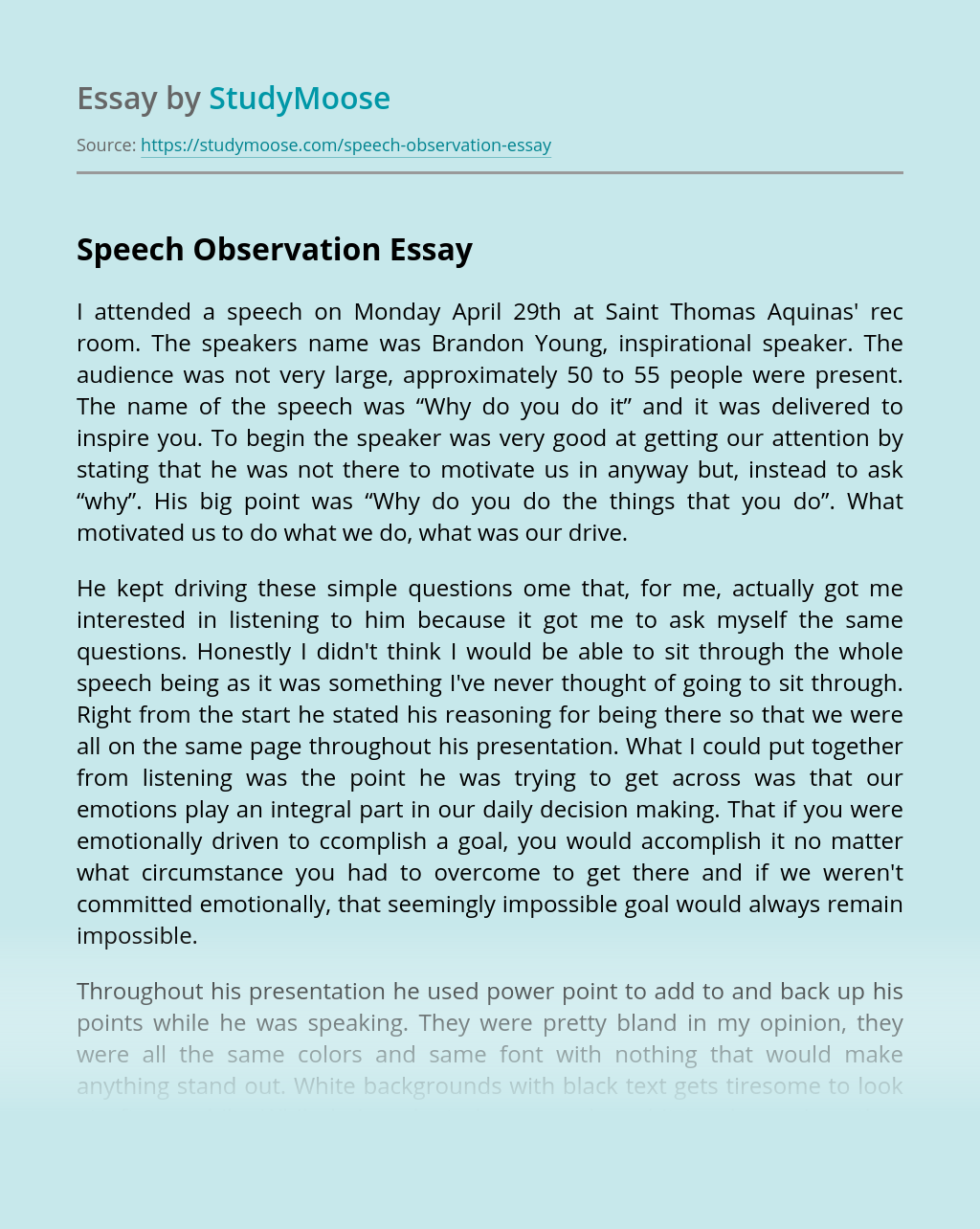 The Third and Final Continent

This story depicts the life of a man’s trials in life and how he gained knowledge from every event that took place while experiencing things he wasn’t used to and gained a lot more appreciation for life. When you look at the last sentence in the story “As ordinary as it all appears, there are...

The inner journey is a metaphysical process in which an individual travels into their own psyche often resulting in form of self realization. Although the journey is not physical, an inner journey is a powerful tool in which one can enhance their knowledge of the world and their own human nature, commonly encountering imaginative obstacles...

Get Essay
Cognitive Component of SWB

IQ gets you through school. Having a high IQ is much better in cognitive skills. The IQ may help with jobs that require little human interaction and mainly just a knowledge of a subject. IQ is more rational thinking. Quickness of mind When you have a high IQ, your brain will increase its power and...

Lizzy Mane looked at the pencil in her hands and felt a sad feeling in her stomach. She walked over to the window and reflected on what she was feeling. She had always loved James, but there was someone new someone she also loved more than James. Then she saw someone in the distance but...

The Concept of Infinity

The concept of infinity is fundamentally incomprehensible. The existentialists had begun to lose their minds trying to label how impossible it is to fully understand reality, until they took a step back, and settled to label everything that gave them a headache with just one word: “infinite.” How easy it is to think, figured the...

Reason and emotion are not always associated together; however the two are deeply intertwined at their bases. Emotion, defined as an inherent response to different situations which results in several variations of internal and external behaviors, is in fact always influencing our reasoning, which is defined as the application of logic in decisions and actions...

As far as a conditioned response goes, emotions greatly come into play. Emotions are triggered by something, or maybe someone. One famous study that proves classical conditioning can trigger a phobia, -check your punctuation -is the case of “Little Albert”. John Watson and Rosalie Rayner performed a study with a nine month old baby. They...