For this assignment, I observed my six year old niece, Faustine Bui who was born on August 16, 2007, at the park where I was babysitting her with her mom for approximately thirty minutes. The park I observed her at is packed with children and dogs are allowed. There is a large play area with jungle-jims and slide and it includes a sandy area which has a variety of playing equipment as well. I first observed Faustine’s biosocial development such as physical growth, gross motor and fine motor skills.

Faustine is 3 feet tall and she weighs 41 pounds according to my Aunt. She is a little shorter than a lot of the six year old that she hangs out with and the ones in the park but I think that her height is in the normal range for kids her age and considering that her parents are already short to begin with, I am not surprised that she is a little shorter than all the other kids.

Faustine used to look like a very chubby baby with a large head and stubby limbs but she’s grown up now to be very lean. She is not chubby nor way too skinny. According to our textbook, “The Developing Person Through the Lifespan”, Faustine’s physical growth is normal.

By the age of six, the average child weighs between forty and fifty pounds and is at least 3 ½ feet tall. They have adult like body proportions which means that their legs constitute about half their total height and they are usually lean considering children around ages five and six have the lowest body fat compared to all the other ages.

I believe that Faustine’s lean figure isn’t just due to the normal growth pattern around her age but that shes lean because of her eating habits at home. Fat isn’t really common in her diet at home and vegetables and fruits are mandatory for three meals a day, everyday. I can also tell she eats healthy because for our trip to the park today, my aunt brought a container of fruits and a couple bottles of homemade fruit juice. Faustine’s gross and motor skills are up to par with the skills of children her age. I observed her running across the park many times with the other children and even beating them in the race that they were holding. She had a hard time conquering the jugle-jim though. She kept waddling back and forth every time she tried to get her feet up on the next bar and she eventually gave up and refused to return to the jungle jim again.

She threw a few balls here and there but she was unable to throw it very far or accurate. By the age of three, children can already kick, throw, jump and climb things such as ladder. By the age of six, children can skip, climb trees and over things, and catch a ball (uofmchildrenshospital.org). I was unable to observe a lot of fine motor skills from Faustine but she did pick up a stick from the ground, hold it like a normal adult would hold a pencil, and started drawing in the sand. By the age of 2, children can scribble, fold paper, draw vertical lines and manage semi-large object with their hands. By the age of six, children can copy letters, grasp pencils like a grown adult, and copy complex shapes (kamloopschildrenstherapy.org). I then observed her cognitive skills which included her language, memory, and perception. When observing Faustine, I realized that she is one extremely talkative child. She would talk about everything and anything sometimes she’d just sit in front of us and talk to us and to herself while playing in the sand. According to Lev Vygotsky and his social learning theory, children use private speech (“The internal dialogue that occurs when people talk to themselves, either silently or out loud” (The Developing Person Through the Lifespan)) to review, decidem and explain events to themselves.

Lev Vygotsky’s theories “stress the fundamental role of social interaction in the development of cognition, as he believed strongly that community plays a central role in the process of ‘making meaning’” (simplypsychology.org). A lot of the things she would say to us would be question like “why this” and “why that”. Other times she would run up to us just to blabber out a very nonsensical sentences and run off and other times she would just run up to the other children and make conversation with them. Her vocabulary has almost fully developed and all her sentences made sense even though what she was say were so silly and wild. She is a balanced bilingual and can speak Vietnamese and English fluently. All of this is normal for a child her age. A the age of 3 children can babble and pretend to read, by the age of five, children begin to read, talk, and write and by the age of six, a child has almost developed their language skills full (ed.gov). I was unable to observe Faustine’s memory during my day at the park with her but according to Baddeley’s model of working memory, children ages 4 and up have gained skills in working memory. Memory of children under age 7 is very weak but over seven, children memory have improved to the point where they can remember not only what happened, but where and when these things happened (sciencedaily.com).

Faustine was very aware of her surrounding. She liked to dig in the sand to find pebbles and other small objects. She was very curious about things around the park and would go exploring with the other children. I then observed Faustine’s psychosocial skills. Faustine is not a shy girl. She ran through the park making friends with everyone she bumped into and she even went up to an extremely shy little girl and talked to her as if they have been best friends forever. She hardly came up to ask us to play with her and sometimes acted like we weren’t even there. According to our textbook, children “prefer to play with peers rather than alone or with parents”. It also states that young children like to play with kids their age and of same social status. In the case of Faustine, she just liked to befriend any kid that was there at the park and willing to play with her. Faustine and the other children did a lot of sociodramatic playing where they would stand on top of the play equipment and pretend to be pirate by scoping out the “sea” and using the slide when they want other children to “walk the plank”.

She was very friendly to everybody and didn’t cause any trouble with the other children. She was eager to get back to the playground to play with the other children every time we called her back to adjust her clothes or have her eat her snacks. According to Erik Erikson and his stages of psychosocial development, which are eight “ stages through which a healthily developing human should pass from infancy to late adulthood” (simplypsychology.org), Faustine is in the Competence Stage (Industry vs. Inferiority). The age range for this stage is five to twelve years and this is the stage where Children become more aware of themselves as individuals.They work hard at being responsible, being good and doing it right (http://psychology.about.com). I saw this in Faustine because she rarely needed us for anything while she was at the park and she liked to explore and learn things on her own like how to work the equipment. I think that Faustine still need to learn about the feeling of other people. She loved to make friends and talk to all the children at the park but she did not realise that some of the children just wanted to be left alone of didn’t like and but she kept persisting on making friends with them anyways.

She also needs to be more aware of her surrounding. Although Faustine loved to explore the park and things around her, she didn’t realize what was going on around her with the other children. For example, she kept jumping from kids to kids not realizing that they were in the middle of play with her. She would jump from one area to the next and forget where she had previously left her toys, and on some occasions, she even forgot that we were still watching her because she was to entranced in her own activities. During my observation. I observed that Faustine is a very healthy and fit child. Her biosocial, cognitive, and psychosocial development is up to par compared to children of the same age as her. She is very athletic and her social skills are very strong. 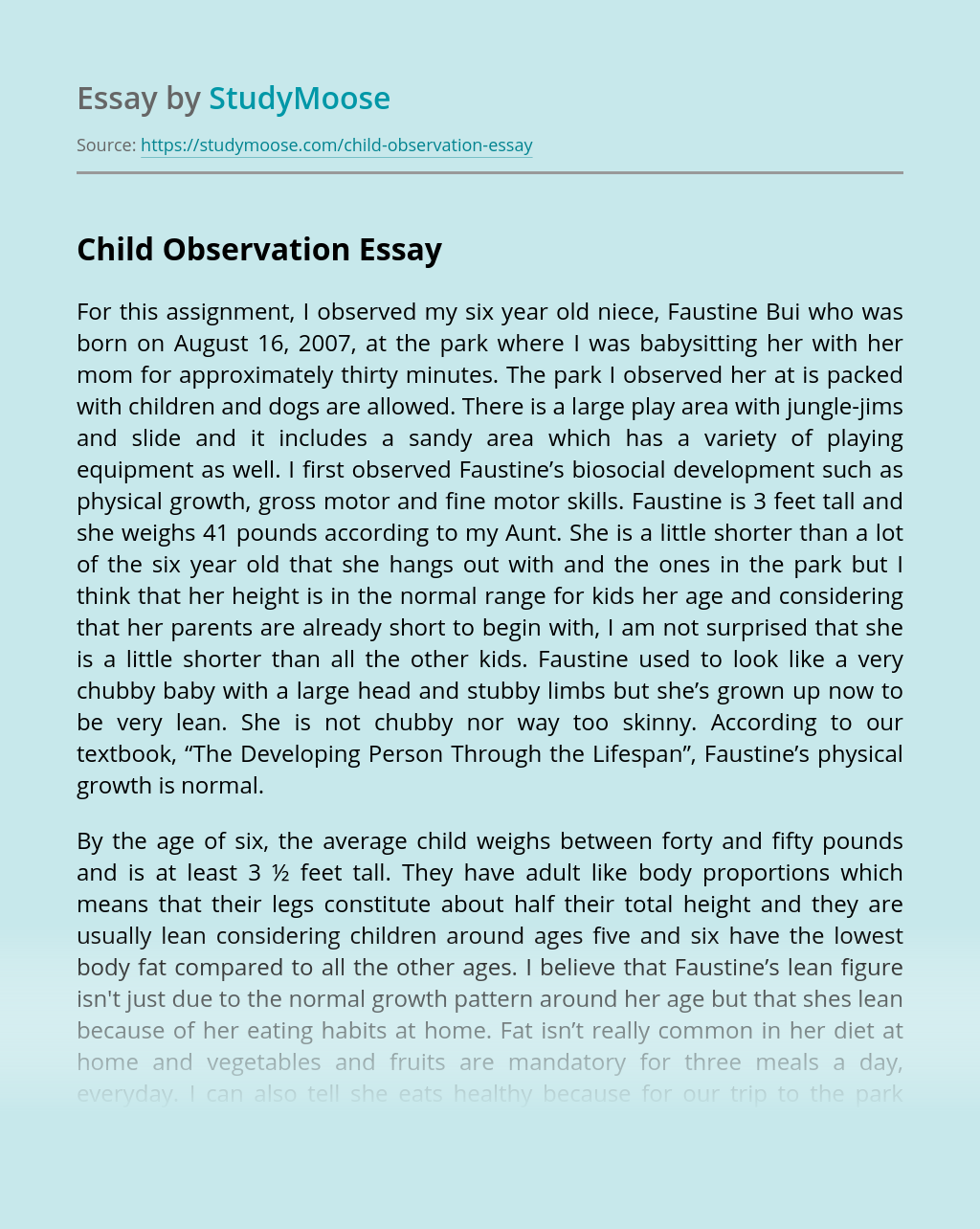