Sorry for the loss - Bridget Keehan

A – Write an essay (900-1200 words) in which you analyse and interpret Bridget Keehan’s short story “Sorry for the Loss”. Part of your essay must focus on the narrative technique and the use of contrast.

“Sorry for the Loss” (2008) starts in medias res and is a short story written by Bridget Keehan. The story takes place in a prison in England, and follows the main character, Evie, as the viewer of the story’s 3rd person narrator. Evie is a Catholic chaplain at a male prison in England and has been working there for a year.

Don't use plagiarized sources. Get your custom essay on
“ Sorry for the loss – Bridget Keehan ”
Get custom paper
NEW! smart matching with writer

The story starts with “Evie has to tell Victor his Nan is dead” which already from the beginning of the text raises many questions for the reader. Evie is constantly in between two worlds with many contrasts; good and evil, God and man and questions about society heats up throughout the text.

In the beginning of the text the reader is in doubt where the story takes place until the 10th line on page 1 it’s reveled that it’s in a prison.

The reader follows an internal 3rd person narration, which lets the reader into the thoughts and feelings of Evie. Already from the beginning of the text a great contrast is revealed to the reader; the prison and Evie. Evie is a very religious and spiritual woman and questions people and their intentions and she seems a little cautious, but at the same time she works at a male prison surrounded by what her religion would define as sinners.

Evie has to deliver a message to Victor Zamora, the prisoner in E22A, and tell him that his grandmother has passed away. Before the prisoners is called out of their cells to do the afternoon labour, she uses the time enjoying the silence trying to “(…) feel comfortable in her surroundings before the landings become choked with prisoners”. She meditates and enjoys the comfort she feels during her prayer, while she wonders if it’s similar to how junkies feel on heroin. When she goes to tell Victor the unfortunate news, she’s surprised to see a good-looking boy with olive skin and blue eyes, and she imagine him as her son “although he probably isn’t quite young enough for the maths to work” , and clearly she thinks good of him, and wants to come through to him. She envies the Imam when Victor asks for him and says that he’s a good man and she’s impressed of Victor’s knowledge about Shakespeare and his interest in spirituality. After having told Victor about his grandmother Evie is somewhat disappointed about his reaction, but at the same time moved by the situation. Afterwards when she’s left his cell, she goes to see the prisoners waving goodbye to their beloved ones and she cries at the sight of them.

Throughout the text it gets clear to the reader what environment Evie is to be found in. In contrast to her personality and faith, prison is harsh and brutal and even people like Victor, who comes of as a man very down on earth, has sinned. The internal narrative in which leads the reader to the mind and feelings of Edie has great impact on the short story and from which point of view the story is read. Even though Edie knows and teaches the difference between good and evil, it doesn’t seem to have a great influence on her judgment and especially prejudice of people. At the end of the story Edie thinks to herself:”(…) wondering at the strangeness of how a thing so hard and sharp, designed to cut, slice and stab, could be named after something so delicate and easy to kill” after having found out that Victor killed another pupil with a butterfly knife when he was younger. Here the author of the text uses the reference to symbolize the strangeness of Victor, and maybe even all prisoners, all people, being such beautiful creatures, but still being able to cause harm, evil and death. Another important passage of the text, which is essential to the understanding of the themes, is the way Edie describes the prison guards whom: “(…) bellowed from testosterone voices that have been trained like tenors to reach the gods” . This leads the reader to more questions, whether it is in our power to act like Gods, judging right and wrong and punishing ‘sinners’. Is it not up to God to judge all living creatures at the end of their lives, and if so, why should we? But the symbolic and narrative used through the short story also questions religion. For example when Victor tells Evie about the pigeons being tortured in the pad next door to his, Evie answers that God says to hate the sin, but love the sinner . Victor sarcastically answers back that he’ll tell that to the pigeon and afterwards Evie wonders how he can feel compassions for a pigeon, but not his own grandmother, but as Bridget Keehan symbolizes using nature as a contrast to society, the pigeon has done no evil and is being tortured while humans let it happen.

It is not a coincidence either, that Keehan has chosen to use the pigeon as a tortured animal since the dove is a world wide and religious symbol for peace. And as the contrast between the innocence pigeon and the convicted criminal, Evie is out of place and finds herself in an abrasive and intimidating environment at the prison, wondering how the stonewalls can keep the noise inside, wondering if the shoppers at the car park opposite the prison notice the envious eyes and wondering if the purely good and son of God could have killed a man for heroin. Bridget Keehan raises questions throughout the text that makes the reader wonder about the frames of society. When criminals are convicted and sent to jail does it make the world free for sinners? And are we capable of building a wall around evil and ignorantly think that it makes the world a better place? As Evie says to Victor: “God says love the sinner, hate the sin”, then why do we fight hate with hate and why don’t we try to integrate the two worlds to make it one, instead of locking it up in hope to forget about it? Man acting like God, controlling others lives and fate is something we’ve done for thousands of years, but as the author may imply it could be time for something else.

Sorry for the loss - Bridget Keehan. (2016, Feb 20). Retrieved from https://studymoose.com/sorry-for-the-loss-bridget-keehan-essay 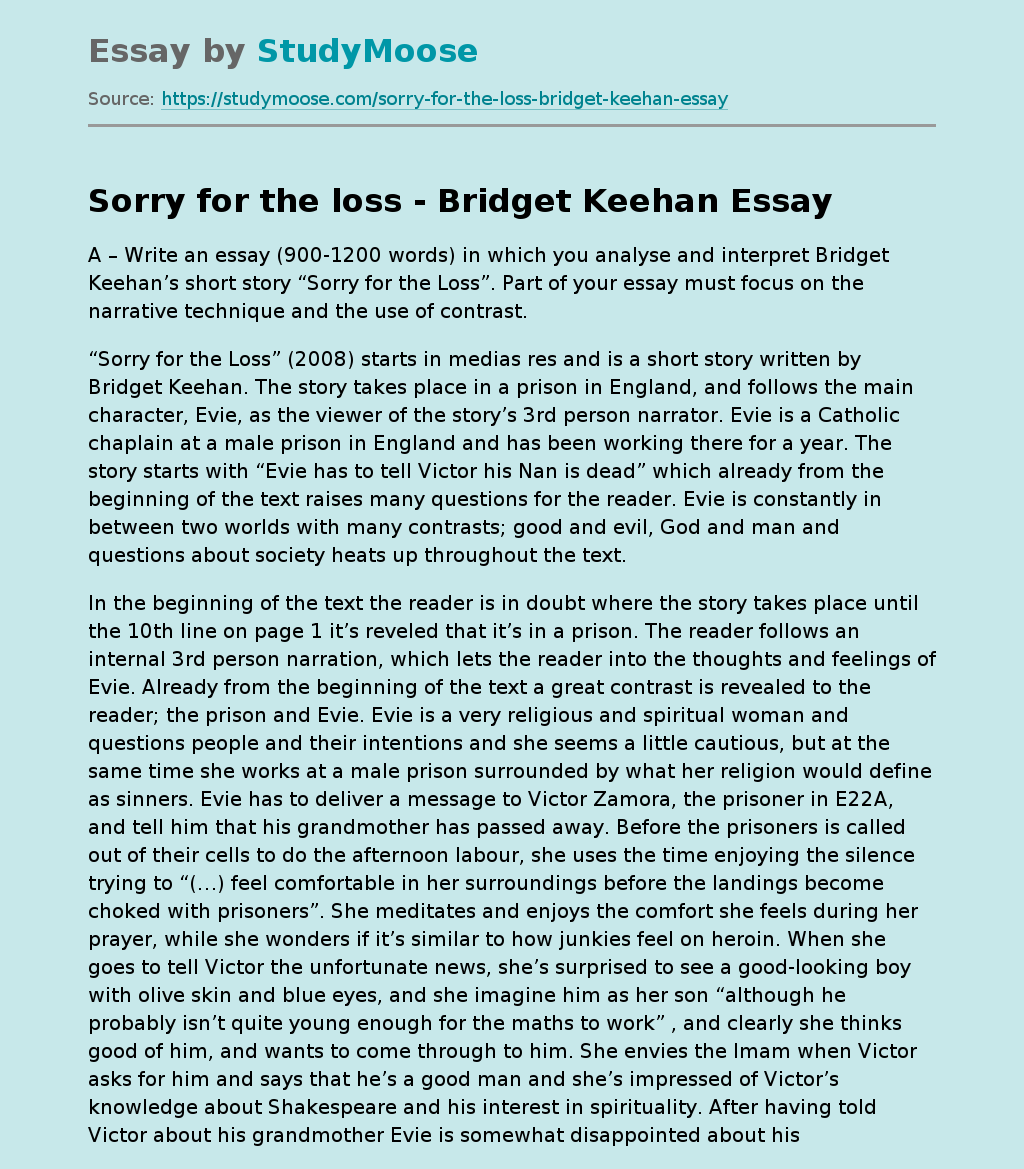