1. Where and when did Sophocles live? Athens, 5th century BC 2. The philosopher Aristotle wrote an influential text on drama called… The Poetics 3. What did Greek actors wear? Masks 4. Greek plays feature a group of performers who sing, dance, provide exposition and interact with the other characters. This group is called… The Chorus 5. Who was Antigone’s father? Oedipus 6. Antigone’s two brothers, Eteocles and Polyneices, did what? Fought on opposite sides in a war for power in Thebes 7. Who is Creon?

The new king of Thebes 8.

Don't use plagiarized sources. Get your custom essay on
“ Sophocles ”
Get custom paper
NEW! smart matching with writer

What happened to Eteocles and Polyneices? They died in battle 9. What does the king of Thebes declare? Eteocles is to be given a funeral and full honors while Polyneices’ body will be left for the sun and the carrion animals 10. What does Antigone ask Ismene to help her do? Bury Polyneices’ body 11. What does Ismene do when Antigone asks her for help? She refuses, and is unsuccessful in persuading Antigone not to do the deed 12.

Who does the Chorus consist of? The Theban elders 13.

Which of these values does Creon praise in his initial speech to the Chorus? Loyalty to the state 14. The Sentry character can be seen as an experiment. In the context of Greek drama, what is unusual about this character? His speech is written in a somewhat naturalistic style 15. What does the Sentry report? That someone has buried Poylneices 16. The Chorus, on first hearing the Sentry’s news, wonders if… God did it 17. What does Creon tell the Sentry? That he must find the culprit or face execution 18.

What/who does the Sentry bring back? Antigone 19. What does the Sentry witness? A sudden and mysterious dust storm, which he takes as a sign of the gods’ displeasure 20. What does Antigone do when she is brought before Creon? Defends her actions by asserting the supremacy of divine law 21. According to an interpretation offered in this study guide, the motivations for Antigone’s rush to martyrdom may have something to do with what? The social position of women 22. In comparing the two sisters, one could most convincingly argue what?

That Antigone consistently keeps her agency while Ismene seems to have very little agency 23. What does Ismene do when she is brought before Creon? She tries to take some of the blame for burying Polyneices 24. What does Ismene argue about Antigone to try to convince Creon not to kill her? That Antigone is Haemon’s betrothed, and thus Creon’s future daughter-in-law 25. Haemon, Creon’s son, enters. What happens in their conversation? At first Haemon seems to agree with his father, but when he tries to persuade Creon to spare Antigone the two men have a vicious argument. 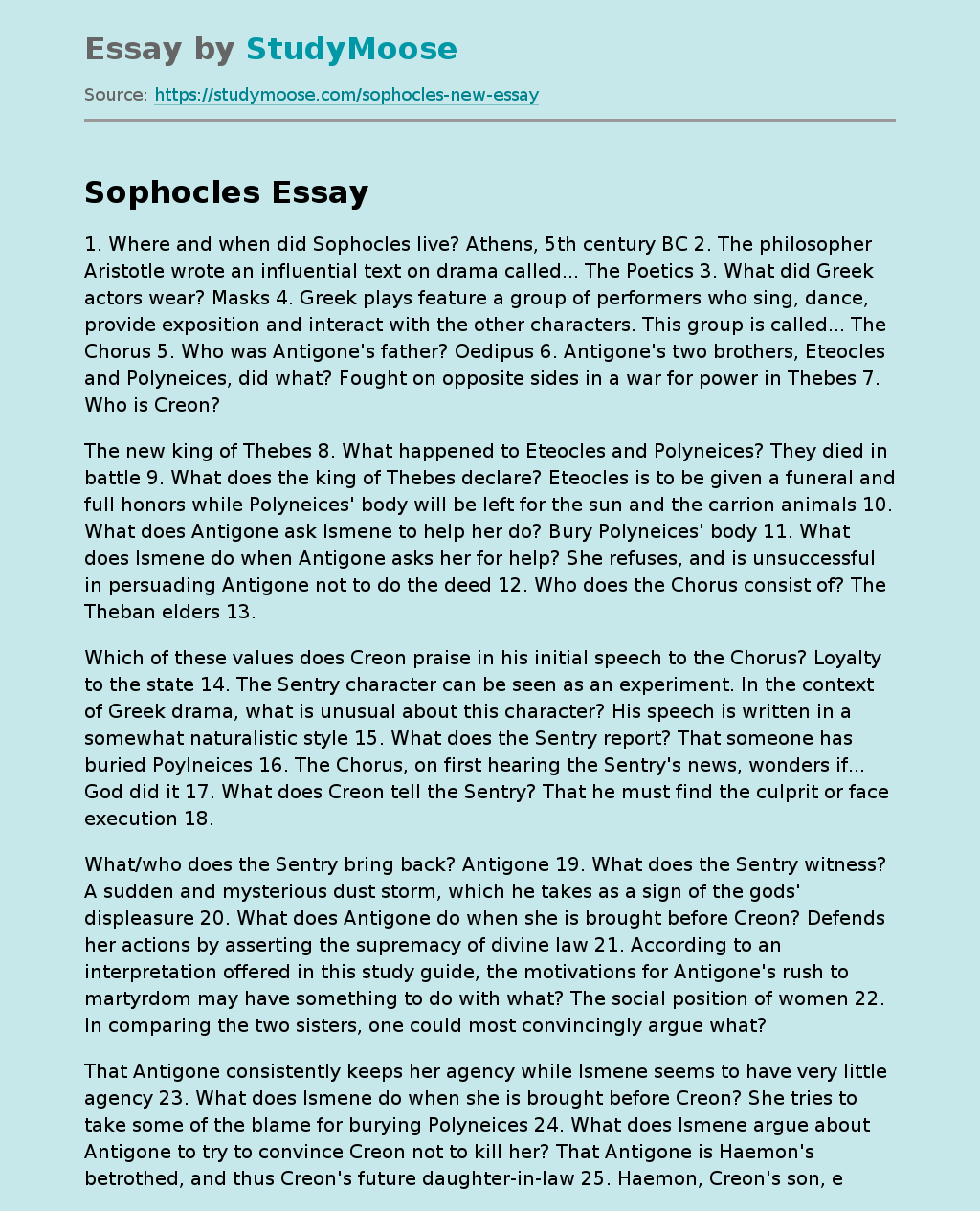