Sophocles’ Antigone is not a difficult play. Even that the play was original written in Greek over 2400 years ago, we have a modern translation in English, and the main story line is very clear and easy to understand. The only part of the play that will probably be confusing is the Chorus.The opening events of the play quickly settle the central conflict between Antigone and her uncle the King Creon of Thebes that is and oppressive ruler. Creon has dictated that the traitor Polyneices, who tried to burn down the temple of gods in Thebes, doesn’t deserve a proper burial.

Don't use plagiarized sources. Get your custom essay on
“ Sophocles’ Antigone is not a difficult play Even that the play was ”
Get custom paper
NEW! smart matching with writer

Antigone is the only one who will speak against this decree and insists on the importance of family and a symbolic burial for her brother. Antigone sees no validity in a law that disrespects the duty of the family members that owe one to another; Creon’s point of view is exactly opposite. He has no use for anyone who chooses private ties above the common good, as he proclaims firmly to the Chorus and the audience as he revels in his victory over Polyneices.

Antigone has the responsibility of being loyal to her brother, Polyneices. However, Creon has the responsibility of being loyal to the people of Thebes. Therefore, both Antigone and Creon have been loyal to whom they have wanted to be loyal to; this is why both are equally correct.Antigone and Creon were equally loyal. Antigone was loyal to her family and the law of the Gods while Creon was loyal to his people and his word: And now you can prove what you are: A true sister, or a traitor to your family (Prologue).

Antigone wasn’t afraid of the danger of Creon’s law, because being a loyal sister was more important to her than death.Antigone performs the role of woman and warrior at once .she does not only what a woman would do but also what a warrior would. Antigone’s view of divine justice is contradictory with Creon’s will as the king of Thebes. Creon that had become the new ruler of Thebes decided that Eteocles would be honoured but Polyneices would be put through public shame.The body of Poelyneices was planned to be left unburied for the animals to eat him and it wouldn’t be santificated by the holy rites. Antigone the sister of both of the brothers wants Polyneices to be buried but in doing so she would be defying Creon’s edict. When Creon finds out that the body of Polyneices have been buried he decides to find out who has done it. When he finds out that Antigone was the one who buried him Creon decides to put her temporary in jail with her sister Ismene. Creon later decides that to spare Ismene and bury Antigone alive in a cave.For some, Antigone, in her eagerness to honour her brother, plays the role of woman and warrior at the same time. Among the messages left by this story we can see: the right of the person to fight against the injustices of society when it comes to fulfilling a personal obligation. The concept of the divine law also appears. Antigone refuses to let King Creon to do whatever he wants with the body of his dead brother. Antigone states,” he has no right to keep me from my own (Sophocles, 441 BC, line 48). Antigone feels what anyone else would feel that nobody has the right to dictate how she should bury her family member. Creon believes that the worst thing a person could do is act against the authorities. In contrast Antigone believes that the law of the state is not absolute. Meaning one should be able to act against the law in extreme cases to honour the people and the gods.He does not care that Antigone wants to properly bury her family member, he only care that Antigone disrespected the state laws and him by doing that. Creon states there is nothing worse than disobedience to authority, it destroy cities, it demolish home (Sophocles, 441 BC, line 720). The fact of the matter is that Creon is a tyrant and that by not listening his own people he is the one who is destroying the city.In addition, in carrying out funeral rites for her brother. Antigone creates a terrible conflict between her and Creon. This brought up the issue of proper burial in Greece, and there is evidence that existed two types of funerals for the dead. One is the familial funeral were only the family would go and the other the public or grand one. This is apparent nowadays because there are small graveside scenes with family and relatives. However there are also funerals that are massively coordinated to most distinguish to illustrious people, great politicians, thinkers, artists or people who have done great things for humanity.The arrogant and cruel Creon fails to take Antigone’s honour for the family into account, and completely disrespect her justifications for her actions. When Creon ask if Antigone dared to violate his laws she responded by affirming, I did not believe that your edicts were so powerful that you, a mortal, could override the gods unwritten and unshakable customs (Sophocles, 441 BC, line 449) Antigone believed that Creon’s rules weren’t as powerful as the Gods unwritten customs. Therefore she should not be castigated or her actions against the state. But here we also introduce another concept, since Creon’s need to defeat Antigone is by two points of view and a single motive: the point of view of his position as king and the point of view of his position as a man. And one main reason: his pride. Creon exclaims to Antigone die then, and love the dead thou must; no woman shall be the master while I live (Sophocles, 441 BC, lines 522-424). This statement highlights the arrogance of the King Creon and his desire to punish Antigone for not only challenging the authority, but because Antigone rebellion threatening that it upsets gender roles and hierarchy. Even when Creon thinks that he could be wrong he will never accept the defeat to a woman.

Sophocles' Antigone is not a difficult play Even that the play was. (2019, Aug 20). Retrieved from http://studymoose.com/sophocles-antigone-is-not-a-difficult-play-even-that-the-play-was-essay 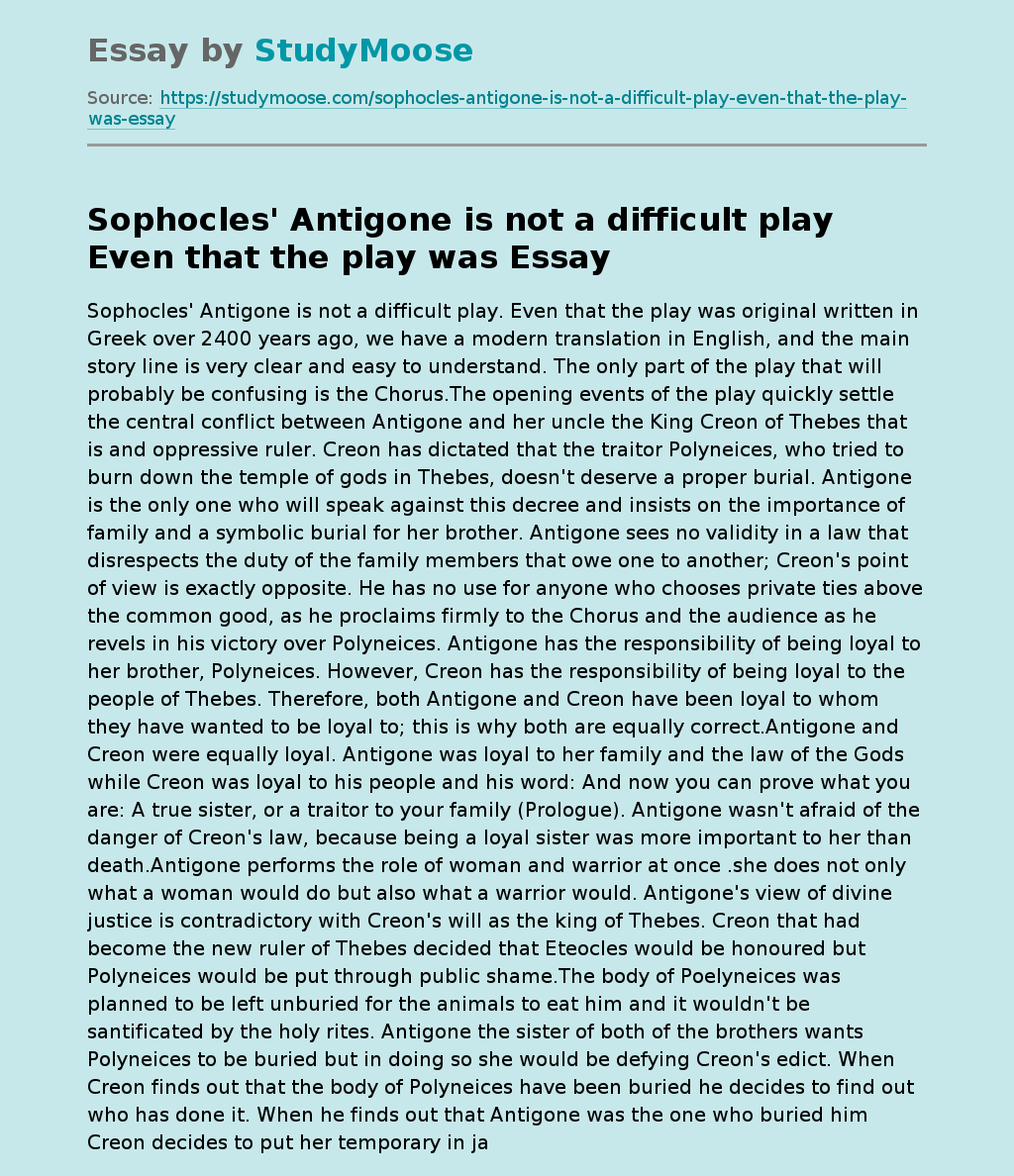