Some Disadvantages of Being a Supreme Court Justice

Turn in your highest-quality paper
Get a qualified writer to help you with
“ Some Disadvantages of Being a Supreme Court Justice ”
Get high-quality paper
NEW! AI matching with writer

They not only make decisions that affect everyone, they also affect their rights and their children’s rights. However, being a Supreme Court Justice does have some disadvantages, such as age, time in office, and how many cases heard each year. One disadvantage of being a Supreme Court justice is their limited numbers of cases too hear per year. As being the highest court system, the Supreme Court does not have enough time to hear every case that comes to the court house.

The court receives about 10,000 petitions for review each year. The court only gives and hears oral arguments in about 75-80 cases. Such as Roe V. Wade on abortions with a 7 to 2 majority vote in favor of McCorvey. Even though this is a very important case, it shows that if the case is not of an important matter of the United States as a whole then they will not hear the case. The tenure of a Supreme Court Justice is also a disadvantage.

The Constitution states that Justices “shall hold their offices during good behavior. This means that they hold their seat as long as they choose and can only be removed from office by impeachment. Justice Samuel Chase was the only Justice to ever be impeached. He was found not guilty, and the verdict discouraged further attempts to impeach justices. Many believe that a Supreme Court Justice is entitled to a lifetime appointment based on experience, knowledge, and expertise. The older you get the more you are stuck in his or her own ways. So a Justice should only serve a term and not a lifetime.

The oldest person to serve as a Justice was Oliver Wendell Holmes Jr. He served from 1902-1932 he was 90 years old when he retired from the court. Now, he was not capable to keep up with fair rulings in the United States because of his “old ways”. He had taken advice from a fellow member of the Supreme Court who told him it was time to step down because of his old age. Oliver died two years later from pneumonia. Haraian F. Stone is also a person who didn’t serve a long term; he was 68 years old when he took his oath of office.

He served from 1941-1945, when he died. These are just a few people who I think could have either not taken an oath to office. They should have been removed from office before they reached a certain age. There should be an important procedure, to review the accomplishments or skills of the Justices on some sort of regular basis. If a Justice refuses to retire, but is physically unable to keep up with the pace of office, he or she should either be forced into retirement or do just like we would do if the President wasn’t capable of handling his duties.

Some Disadvantages of Being a Supreme Court Justice. (2017, Mar 05). Retrieved from https://studymoose.com/some-disadvantages-of-being-a-supreme-court-justice-essay 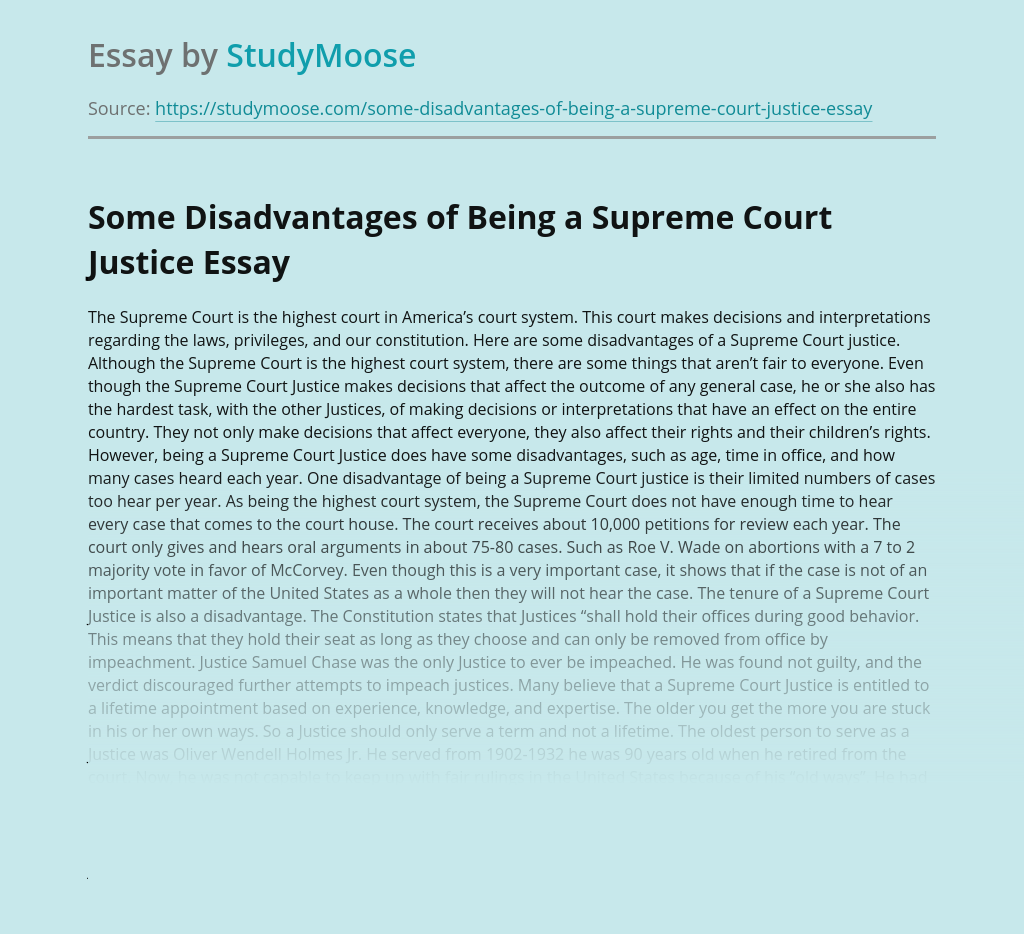 Turn in your highest-quality paper
Get a qualified writer to help you with
“ Some Disadvantages of Being a Supreme Court Justice ”
Get high-quality paper
Helping students since 2015
Stay Safe, Stay Original