Imagine yourself behind the counter or in the drive- through window at McDonalds. You are programmed how to act and what to say. You have been working there for three years and earn a salary of $5. 50 an hour. You have never exceeded 29 hours while working there. These circumstances are true for over 40 percent of six million people employed in restaurants today (Ritzer 59). The reason for these circumstances are due to the change in our society by which the consumer wants the biggest, fastest, and best product they can get for their money.

Turn in your highest-quality paper
Get a qualified writer to help you with
“ Sociology – McDonald’s ”
Get high-quality paper
NEW! AI matching with writer

This change in society can be attributed to a process known as McDonaldization. Although McDonaldization can be applied to many other parts of our society, this paper will focus on its impacts on the inequalities in the workplace, along with some theoretical discussions on the topic. My belief is that the process of McDonaldization, where the ideology of McDonald’s has come to dominate the world, has caused many restaurants to emulate McDonald’s style of running a franchised restaurant chain in terms of efficiency, calculability, predictability, and control (Ritzer 60).

First, before I discuss the impact of Mcdonaldization on restaurants, I will define what McDonaldization is. McDonaldization is the process by which the principles of fast-food restaurants are coming to dominate more and more sectors of American society, as well as, of the rest of the world (Ritzer). George Ritzer created this concept of McDonaldization as a continuation of Max Weber’s theories on bureaucracies (Ritzer 61). Max Weber defines a bureaucracy as a goal-oriented organization designed according to rational principles in order to efficiently attain their goals.

Its three main characteristics are that it has a division of labour, hierarchy of authority, and an impartial and impersonal application of rules and policies (www. faculty. rsu. edu/Theorists/Weber/Whome. htm). Thus, from that definition of a bureaucracy, one would conclude that McDonald’s is a bureaucracy. The fact that it is bureaucracy is supported by the fact that each assigns workers to a specific job where each worker individually contributes to the overall success of the restaurant by doing his or her job.

For example, McDonalds workers are assigned to work at the grill, register, or drive-through window. The restaurant also has ranks while on the job such as worker, shift manager, crew chief, and franchise owner. These ranks demonstrate the hierarchy of authority. Furthermore, the restaurant enforces the impartial and impersonal application of rules and policies. Through the eyes of C. Wright Mills and many other theorists, this bureaucratic demiurge causes alienation of its workers. It also creates powerless workers that follow the orders from the managers.

Mills states that modern bureaucratic capitalism alienates its workers from both the process and the product of work (Wallace 107-108). The Frankfurt theorists also believe that alienation is the central issue when discussing the effects of bureaucratic capitalism on personality (Wallace 103). The workers in bureaucracies are denied such basic needs as creativity and identity. This causes their work to be entirely impersonal. They have no love for working; they just complete their work.

Basically, they explain bureaucracies as dysfunctional and creativity blockers that deform human personalities. In the short video, Fast Food Women, the process of McDonaldization and the insights from Mills and the Frankfurt school can be clearly observed. The video illustrates women in Kentucky that work in various fast food restaurants. Even though their jobs all differ, these women are very similar. They are programmed workers that act the same, they get paid minimum wage, and they have no health benefits at all. 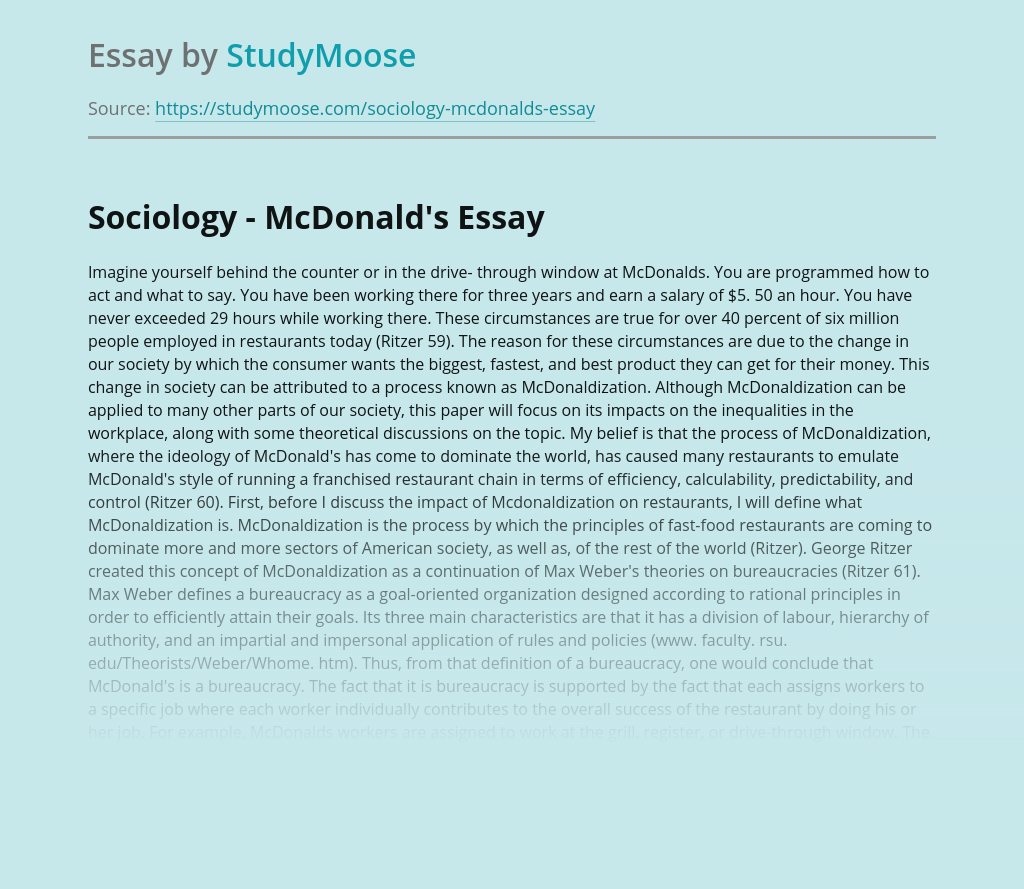 Turn in your highest-quality paper
Get a qualified writer to help you with
“ Sociology – McDonald’s ”
Get high-quality paper
Helping students since 2015
Stay Safe, Stay Original