Social Prejudice in To Kill a Mockingbird

To kill a mockingbird is about growing up. The main character is named scout finch . She learns about people and life . The setting takes place between 1933 and 1935 in maycomb , Alabama. Scout’s mother is dead so she lives with her dad and brother. Scout learns from Atticus and from experience. One lesson scout learned was “put yourself in other people’s shoes” ‘ she mostly got this lesson wrong but figured it out in the end . Scout lives across the Radley house.

Don't use plagiarized sources. Get your custom essay on
“ Social Prejudice in To Kill a Mockingbird ”
Get custom paper
NEW! smart matching with writer

There’s man named Arthur radley a grown man in his 30s and hasn’t been see at all and lives across the street. The people living around there call him “boo radley” cause they never seen his face or seen him step out his house. The kids have drawn a bad picture of him described as he eats rodents and cats that he catches .

But the real story is that he got in trouble with the law when he was teenager.

His father never let him out the house again after that incident. His father died once he started getting older . Arthur lives with his older brother . Scout and jem and dill always play around the neighborhood and got curious and ran past the radley house . One day they started finding presents like gum and pennies hidden in a hole on a tree . One night scout and jem were outside and radley puts a blanket on scout . Scout never saw radleys face that time she was too scared to look behind her .

The second lesson in this book is that you don’t kill a mockingbird . It has a literal and metaphorical meaning to it . Atticus gives the kids air rifles but said they can kill anything but mockingbirds . They can’t kill them because they don’t hurt or eats anyone’s plants . Lesson three is to keep fighting even if you know you’ll lose . The other side of the story is about Robinson tom is a black man and was charged with raping a whites woman named mayella ewell . Scout and jem always getting bullied and teased because there father is defending a black man . Atticus wants to teach the kids a lesson of the bravery and to keep fighting when you can’t win . Lesson 4 , that the world is very unfair , what this means is that the children started to realize how evil and bad their whole community is . Ewell tries to kill scout and jem but from trying he broke Jem’s arm. Boo radley comes to help the children and kills ewell. They know that radley killed ewell but they have to make up a good cover up story . Scout understood what Atticus was trying to do . She said “making a hero out a radley would be like killing a mockingbird” . This lesson has taught her about mockingbirds and having to see the unfairness of life . That’s how she understood the first lesson putting yourself in their shoes . Scout said “you never really understand a person until you consider things from his point of view until you climb into his skin and walk around in it .

The story the mockingbird does have a racial division was wrote in the 1950s , during that time were social changes were made . The story is just about scout learning lessons along the way of life as she grows up . Scout and her brother jem become closer with radley and treat him differently cause they realized he’s not scary has they thought he was . Scouts father tries to helps a black man but the judge didn’t believe one single word and found him guilty and sent him to jail but soon enough he escaped jail and got shot and killed . Everyone bullied the kids because there father supports a black man . What the story is saying here was everyone is the same and deserves to be treated good doesn’t matter from there race or gender . They grow up at the end and still learn new life lesson on the way . Race during this time was difficult and people treated others differently because of their color . Children became schooled by race and gender in Alabama. Atticus was a public defender and was a loving caring father to his children . This story teaches readers a lot of life lessons too and truths about about the southern life .

I think this book helped people in the real life now in the future realize that gender or race everyone as a right to say in anything as in anyone does . Scout’s aunt comes to support her family . The Great Depression was happening during this time , and people were poor . Money and race were a big thing at this time . Scout didn’t like her aunt , having her there was necessary and her making it stable. The whole finch family fought for what was right , even if it didn’t work the first time for tom Robinson .

Social Prejudice in To Kill a Mockingbird. (2021, Apr 15). Retrieved from https://studymoose.com/social-prejudice-in-to-kill-a-mockingbird-essay 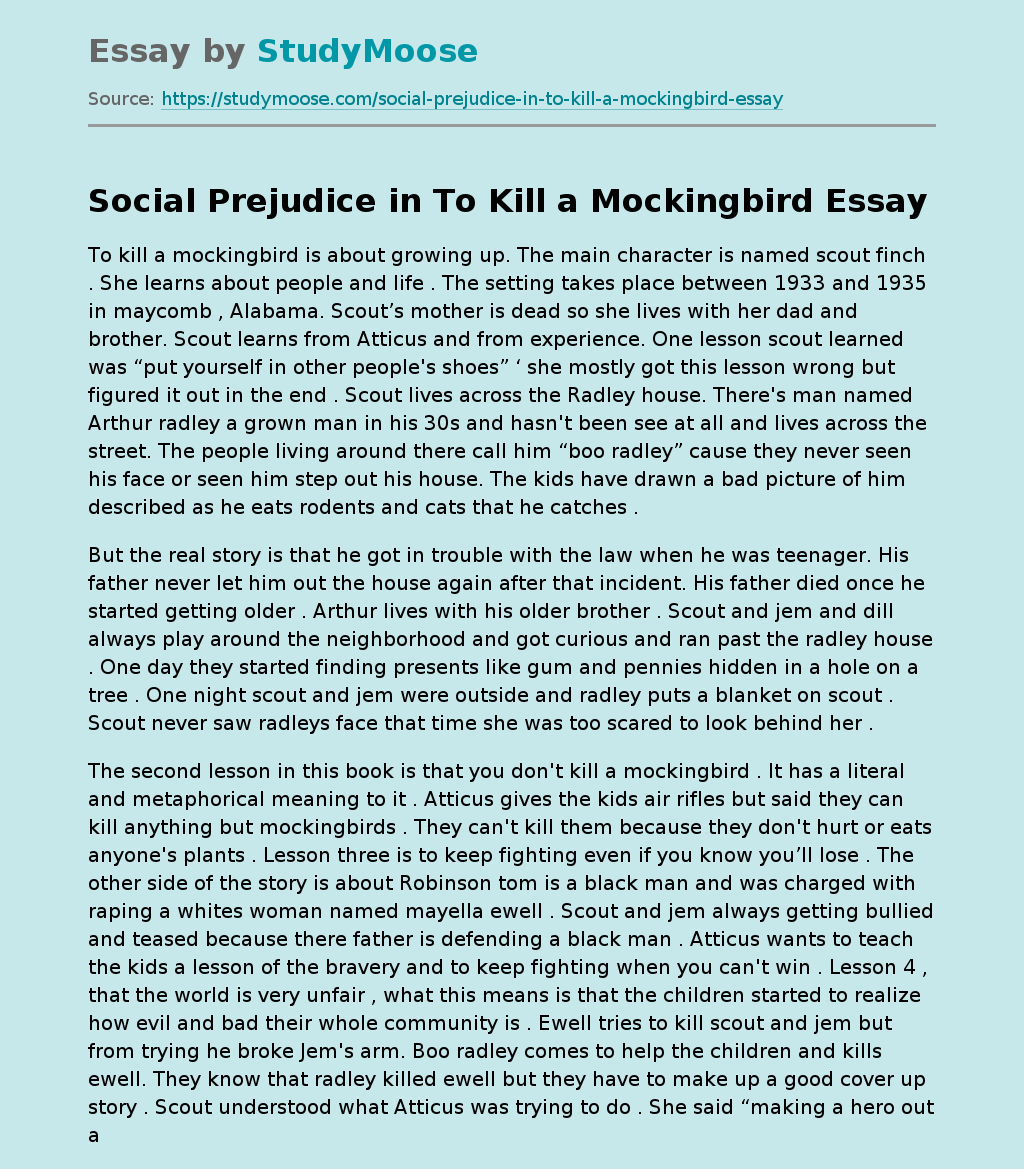