Social Change and Irish Social Policy since the Famine

Forms of Social policies were noted at the events of the Great Famine of 1845-47, which was a result of failed Potatoes crops which was the main food dependence of the Irish population causing the death of 1 million people (Dukelow, Murphy, 2017, p18).

Don't use plagiarized sources. Get your custom essay on
“ Social Change and Irish Social Policy since the Famine ”
Get custom paper
NEW! smart matching with writer

Workhouses during such a period express themselves as a form of states intervention in tackling poverty issue but lacked competence in accommodating the vast poor, with overcrowdings in 1851 (O’ Connor, 1995, p126). The unavailability of state provision was further supported by voluntary organization’s that set up soup kitchens with one notably known as the Society of Friends called Quakers.

Development of policies for poverty were later instigated by the depictions of Irish sufferings in Britain; who at this time expressed their authority through colonialism over Ireland (Dukelow, Murphy, 2017) this followed with introduction of the Irish poor relief Act of 1847 that gave the right to relief, expressed through soup kitchens (Kiely, 1999, p15). Early Post famine also saw expressions of inequality through selective provision of outdoor reliefs, one being the abled bodied poor gaining provisions only at the stage of an overflow or spread of fever in the workhouses because of fear idleness will be encouraged (Dukelow, Murphy, 2017, p18). Improvement in policy saw introduction of the 1880 relief distress, much generous extension of relief to all the needy.

The 1880’s policies were limited, as emigration where encouraged through emigration schemes for those dependent on relief to migrate to other British colonies that offered job opportunities in Australia or Canada because of the sustainability of workhouses in Ireland (Vaughan, 2010, p707). Inequality of care for women was also noted through encouraged emigration from the country because of the fear of that they would burden the state (Moran, 2004). Furthermore, landlords also funded emigration of the poor, in other to cost them less than supporting them through the workhouses (Sonnelitter, 2018, p 14).

Post famine Ireland revealed improvement in health policies, nevertheless through amendments of the poor law Act allowed provisions of public hospitals to expand from workhouses in the period 1846 up until 1861 {Green,2013, p115). With workhouse regimes becoming less severe in the 1860s through the promotions of equality of care, saw the boarding out of children from workhouses because of the shared agreement that children should be in a family environment (George, 1998, P8-9).

Improvement of Child welfare was also noted after reports of neglects; that prompted the introduction of children’s charter Act to protect children in 1908 (Dawson, 1910, p388-95). Ireland obtaining its Independence in 1922 further highlighted a changing society; while prior to that year saw the development in housing provision by housing initiatives to fund multiple laborers’ Act for new houses (Dukelow, Murphy, 2017, p 25).

The introduction of the national Insurance Act in regards to health; allowed a combination of both employer, employee and state input in contributions to funding a free medical service with relief for unemployment and sickness in 1911 (Kiely, 1999, p 2). However, this period highlighted the position of the catholic church in opposing social change in Ireland to maintaining an agricultural national perspective in opposing the national insurance Act while calling for it to be reviewed which showed a conservatism that would cost Ireland the opportunity of an insured health system (Powell, 1992).

limitations of the 1911 Act also saw the rise of income and social inequality through the model of the male bread winner that put men as sole provider and wage earner in households over women (Power, 2012, pp.119-120). These inequalities instigated several women’s political movements furthering the agenda of equality in voting rights which was achieved in 1918 (Luddy, 1995. p274, 285).

From observing the 1950s, Ireland appeared to be taken up a more tolerable approach in its economy by shedding away from its protectionism polices; even though it experienced economic stagnation in taxes and public cuts in spending (Dukelow, Murphy, 2017, p42). These cuts affected employments in agricultural settings that encouraged large emigration from the country with accounts noting approximately 408,800 people between 1951 and 1961 as a net loss (Ibid).

Migration from Ireland to Britain pointed the inadequacy of social protection in the state that viewed Britain a destination for employment for women, especially because it favored their autonomy in rights (Ryan and Webster, 2008, p121). O’Hanlon (2004) confirms that women’s autonomy was in fact favorable abroad with Irish married women having 40% participation rate in Britain than 7% in Irelands labor Force (O’Hanlon, 2004, p72-9).

Further industrial development in the late 1950s saw the economic expansion program promote economic policies in dealing with emigration and unemployment (Government of Ireland, 1958, p.7). This period showed a change in attitude from protectionism as it allowed foreign investment in industrial developments; highlighting Irelands open participation in dealing with foreign linked investment for the promise of economic growth and improved living standards (Leonard, 2006, p123-124). The agricultural services transitions to industrial, revealed the economic shift through 1960s and 70s that pointed out a time of social and cultural change influenced by the media in becoming a more open and an urbanized society (Lee, 1979, p173-172).

Other Equality measures saw Ireland’s introduction to the European Union, signifying a change in social policy in 1973 with women’s social citizenship improved in benefits for an improved gender entitlement (Kiely, 1999, p4). With events such as the National agreement allowing for the networking of trade unions, employers and government bodies; made Ireland grow from a dependent set of policies to a more National policy development (Kiely, 1999, p 5).

Ireland’s membership to the European Economic Community in 1970s help improved its social policy through the National social partnership (Johnstone and Wilkinson, 2016, p 104). Policies to improve unemployment were also put out in the 1990s through the programme for Economic and social progress to reform aspects of social protection relating to welfare, education, housing and Health (OECD, 2001, p135-138). These allowing for a steady rise in economy through the National Agreement in 1990s with emigration decline reducing unemployment and increase in gross national product (OECD, 2001, p136).

Such period saw the birth of the Celtic Tiger providing social development funds through renewed political drive (Kiely, 1999, p5). Furthermore, development in Irish economic and social governance now appears to operate through social protection structures that allows for the partnership of academics, trade unionist, government bodies for the development of an innovative economic and social policy strategy for Ireland on a National and local level (Rush, 1999, p154).

Social policy interventions have proved to be vital for the development of social change in Ireland observing effects of lack of welfare provision through high levels of emigration from the country and the developments of inequality in employment which furthered migrations. Irish social policy has experienced changes and improvement since post famine affecting its social relations of its time through early introduction of poor law acts in countering poverty.

Nevertheless, to the level of effectiveness of an Act introduced for welfare determined the level at which Emigration, Inequality and social change was observed. Furthermore, a breakaway from a conservative and paternalistic dependency of post-colonial influences was also noted towards a European model of welfare with the change in social development through a National Social policy that furthered equality that is leading to an inclusive society that improves its national perspective as a country and economic development.

Social Change and Irish Social Policy since the Famine. (2019, Dec 19). Retrieved from https://studymoose.com/social-change-assignment-example-essay 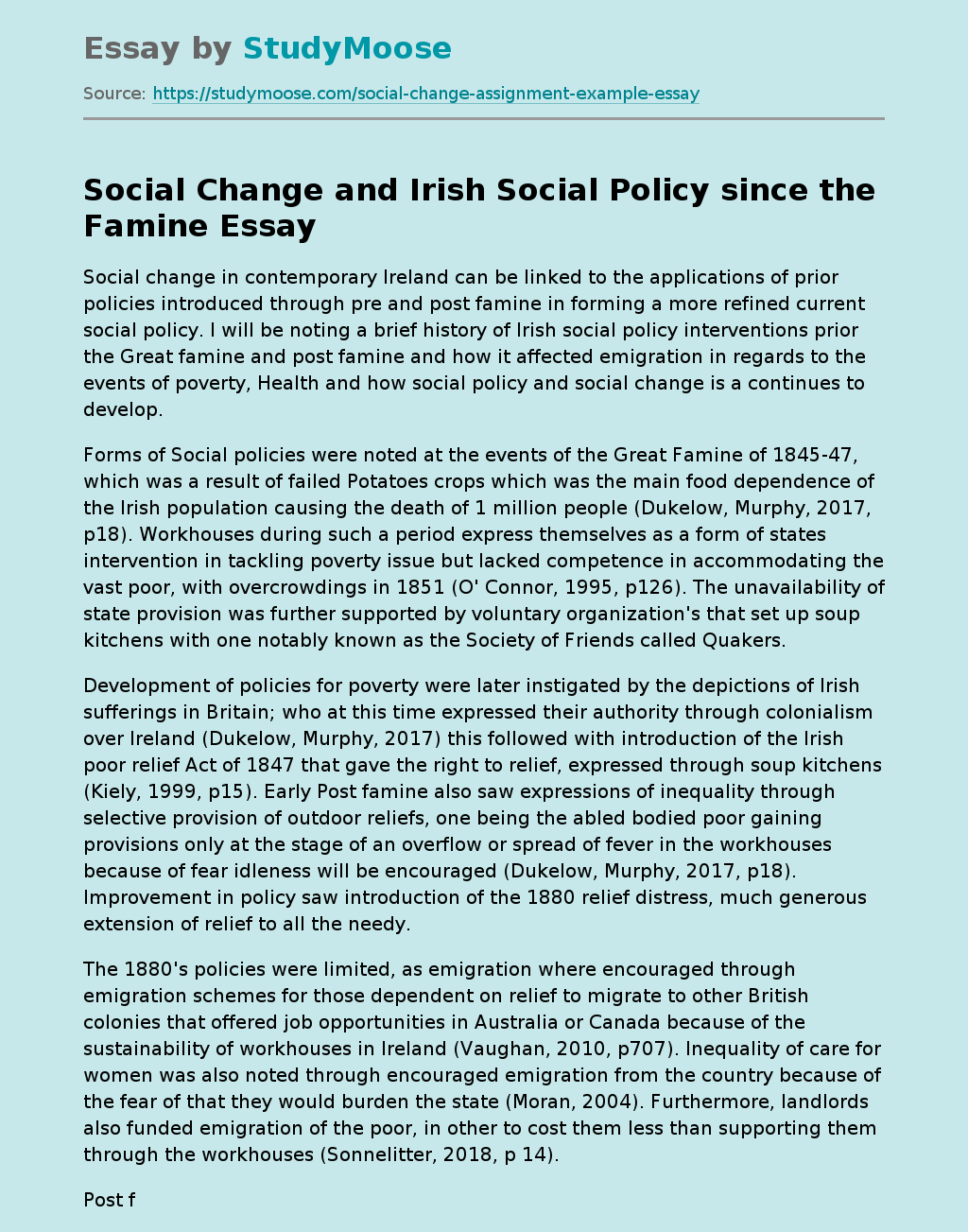