Should American Gun Laws Be Reformed

America is under ever mounting pressure to reform its gun laws. Overall, 337,960 gun related crimes and 31,000 firearms deaths a year results in America having the highest rate of firearm crime and death in the western world. America’s gun violence is so remarkably high for such a wealthy nation. Continuous mass shootings in schools and workplaces, most recent of which was the Sandy Hook school shooting on December 14 2012, means there is constant political debate over if/how the government should tackle gun violence.

Don't use plagiarized sources. Get your custom essay on
“ Should American Gun Laws Be Reformed ”
Get custom paper
NEW! smart matching with writer

Many argue that there should be tighter checks on people purchasing guns, while the NRA and gun advocates claim that the Second Amendment guarantees each citizen an absolute right to “bear arms”. Aims 1. I aim to find out what the current law is on carrying a firearm in the USA. 2. I aim to compare gun laws and gun crime in the USA to countries with similar levels of gun ownership. 3. I aim to discuss if there are effective ways to reduce gun violence in the USA whilst retaining the right to bear arms.

The Second Amendment is the part of the US Bill of Rights that protects the right of US citizens to keep and bear arms, it reads: “A well-regulated militia, being necessary to the security of a free state, the right of the people to keep and bear arms, shall not be infringed. ” (1791) Gun laws vary in the USA between different states. Stricter states like California require a Handgun Safety Certificate for handgun purchases, obtained by passing a written test; and short-barrelled shotguns and rifles are prohibited.

By contrast, states like Arizona let any adult who is not a “prohibited possessor” openly carry a loaded firearm. “Self-defence” is a legitimate reason to carry a gun in public nationwide. All states have gun laws that are more relaxed than British law. Comparing Countries The US has the highest rates of gun ownership in the world, 88. 8 guns per 100 people (2007). The number two country, Yemen, has significantly fewer guns with 54. 8 guns per 100 people. This shows how separated the US is from the rest of the world in terms of gun ownership.

It also makes it hard to directly compare the USA to a country with similar gun ownership rates. Finland compared to the USA Finland has the 4th highest firearm ownership worldwide; 45. 3 guns per 100 people, with only Switzerland (45. 7), Yemen (54. 8) and America (88. 8) with higher rates of gun ownership. However, where Finland differentiates itself from America (and Yemen) is that it has comparatively low levels of gun crimes and deaths. The small arms survey (2007) shows that 60% of murders in the USA are gun-related whilst in Finland only 19. % of murders involve a gun. Last year alone America suffered seven mass shootings; Finland, just one. Gun ownership in Finland is much more regulated than it is in the US. Firearms can only be obtained with an acquisition license, which can be applied for from the local police. Guns must be stored in a locked space or otherwise with vital parts removed and separated. They may be carried only when they are transported from their place of storage to the place of use (eg: shooting range).

Aside from police and military personnel, only security guards with closely defined working conditions, special training and a permit are allowed to carry a loaded gun in public places. Self-defence is not a valid reason to own a gun. The firearms certificate may be cancelled if a person has committed any crimes. Physical and mental problems or reckless behaviour are also valid grounds for cancelling the certificate. A major question is whether gun-control laws reduce crime. It would seem that Finland shows this to be true. Tighter gun control seemingly drastically reduces gun crime.

Are restrictive gun laws the reason that Finland has a much lower rate of gun crime than the USA? Or are there other major factors? Israel compared to the USA Although Israel has seemingly very tight laws on firearm ownership, it is a country that is very heavily armed due to compulsory military service and armed security guards in every school and most workplaces; yet they rarely use their guns to shoot each other. Many men and women openly carry firearms while carrying out day-to-day activities in Israel, but non-political mass killings there are unheard of.

In Israel guns for personal use are theoretically hard to legally obtain. Assault rifles are banned, registration is necessary, and a whole system of checks and requirements are in place to keep weapons out of the wrong hands. Yet, gaps in the system and non-thorough checks make it easy for nearly anyone to come up with a legal excuse to own a gun (even though not many do). Despite being in a constant cold war, only 58 Israelis were murdered by guns last year, compared with 10,728 Americans. Israel hasn’t even got a high percentage of gun related murders; 11. 7%. Lower than both Finland and the USA.

This can’t be down to heavy gun restriction, because Israel is a country where everyone; not only knows how to use a gun effectively due to compulsory, excessive military training, but, every single citizen has almost immediate direct access to a gun. Surely, any Israeli intending to murder someone, would instinctively choose a gun as their weapon? So, why is it that, in one of the only countries in the world that makes it compulsory for every eighteen year old to spend 3 years learning how to shoot to kill, we see some of the lowest levels of gun crime worldwide?

In Israel, guns are not toys to be used as displays, or for threatening suspicious people walking down the street. They are necessary security measures against terrorism for the public’s safety. When everyone has a gun, guns are no longer seen as talismans for the weak, frightened, and unstable, seeking a sense of security, but as killing machines that are to be handled with the utmost caution and care, used solely for serious protection. Can the USA reduce gun violence? Israel is a prime example of a society that has a large amount of armed civilians in public places, yet almost no gun crime.

This is a direct result of its gun culture. Its attitude towards guns and the knowledge every adult holds; how to handle and use a gun correctly, translates to a very responsible society. A similar model can be seen in Finland. Responsible gun carrying adults, with appropriate knowledge, who understand the uses and dangers or guns, result in low levels of gun crime and a safer society. Similar attitudes towards guns can also be seen in Switzerland (also with compulsory military service. ), Sweden and Norway all of which are in the top 12 countries for gun ownership yet all have far lower rates of gun crime than the USA.

Changing gun culture in the US would be a realistic place to start trying to reduce violence, even though it may be costly. This would be a legitimate and possibly more effective alternative to heavily decreasing the number of guns in public ownership. Conclusion To be sure, shooting rampages have occurred in the past years in Germany, Norway, Finland, Canada, Australia and the United Kingdom, but nowhere as costly or numerous as in the USA. This is largely down to America’s gun culture which needs to be changed if America wants to end mass shootings and decrease its gun crime.

Following Israel’s example and educating gun owners about their rights and responsibilities, so as to create a culture of sensible and mindful gun ownership. If the US government were to spend money educating gun owners about the uses and dangers of guns (which they already do with gun carrying police officers), they would start to create a more stable society. America’s gun culture is what needs to change, not its ownership rates, if people want to own firearms and the government permits it; it’s the government’s responsibility to make sure the owner is capable of handling a gun safely, so that they don’t infringe on others citizen’s life.

This solution would not mean a drastic reduction of citizens owning guns. Rather, it would encourage them to use them safely, with caution and respect. This has the direct intention of reducing accidental injuries and crime alike. Gun ownership isn’t the problem. People aiming guns at each other is. Guns don’t kill people, people kill people. America needs to change to attitudes of its people fast, before more of them die.

Should American Gun Laws Be Reformed. (2016, Oct 02). Retrieved from http://studymoose.com/should-american-gun-laws-be-reformed-essay 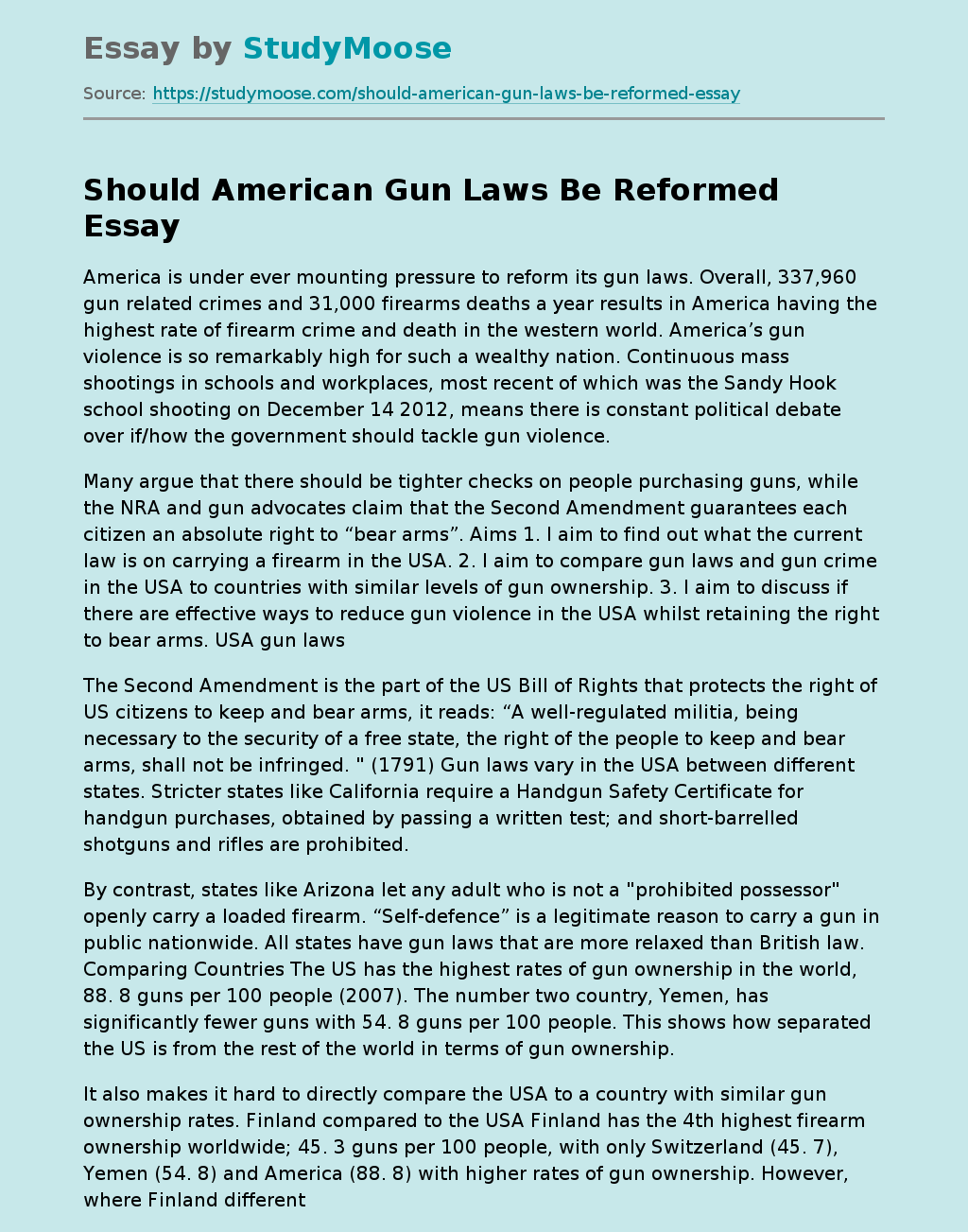