Seeds of Death Unveiling the Lies of GMO

The documentary that I watched is called Seeds of Death Unveiling the Lies of GMO. I found this documentary to be very interesting because it tells you about genetically modified organisms and the damages it can do to humans, animals and our environment. This documentary tells you that the companies that produce the genetically modified organisms (GMOs) are more interested in making money than worrying about the consequences of it making humans sick, killing animals, insects and how it is destroy the environment.

Don't use plagiarized sources.
Get Your Custom Essay on Seeds of Death Unveiling the Lies of GMO Just from $13,9/Page

Farmers who have their crop fields next to or downwind from a genetically engineered crop field can have their crops get contaminated. There is hope because it may be impossible to turn the situation around. The documentary discusses that genetically modified (GM) foods would change our genetics, which in turn would change our children’s genetics, the genetics of insects and animals.

There are some strengths of the documentary that are very informative. One of the strengths is that it goes into detail about what issue can occur when a person eats genetically modified foods. Some of those issues are that it can cause organ failure, infertility, immune system failure and can cause holes in the GI tract. The next strength is that it talks about and shows you in the video that GM crops, after being sprayed with pesticides, are killing insects and tests have been done on rats that show what the GMO have done to their bodies inside and out.

The third strength is that it talks about how companies, when trying to get FDA approval, only have to give certain information and not all of their research in order to get FDA approval. It talks about government corruption and how in the U.S. our food does not needs to be labeled if it is a GM food but in the European countries it does need to be marked in order to give the population a choice
of eating or not eating GM foods.

There are also weaknesses in the documentary. The main focus is on only one company, called Monsanto, but they do not discuss other companies who produce pesticides and are also in the business of making GM foods. Another weakness is that the documentary does not come out and tell us whether or not GM foods are being sold in the U.S. for human consumption or if they are only producing it in the U.S. for research. The last weakness that I found was that the video did repeat some of the same information throughout the documentary and seems repetitive and they did try to squeeze a lot of information into the 80 minute video.

I chose to read three articles about genetically modified foods. The first article contradicts all the information from the documentary Seeds of Death, as the article states that due to the research that has been done, GM foods are not the cause of organ failure, infertility, etc. The article goes on to state that one of the reasons they are making genetically modified foods is to help the countries that have populations that have little or no food.

Scientists are stating that GM crops can grow in dry and salty land, withstand high and low temperatures, and tolerate insects, disease and herbicides. Despite such promises, most of the world has banned, restricted and otherwise shunned GM foods. Eight European Union nations have banned GM crops outright. Throughout Asia, including in India and China, governments have yet to approve most GM crop. In Africa, several nations have refused to import GM foods in spite of their lower costs and Kenya has banned them altogether amid widespread malnutrition.

The second article I read discusses the use of the pesticides and how the GM crop they call “Roundup-Ready crops”, has been manipulated to be resistant to glyphosate, the active ingredient in the broadleaf weed killer Roundup. The article goes on to state that GM foods have been part of the American diet for two decades. Some of the GM crops, which are non-labeled crops, are sweet corn, peppers, squash and zucchini, rice, sugar cane, rapeseed (used to make canola oil), flax, chicory, peas and papaya. The article also informs you that about a quarter of the milk in the United States comes from
cows injected with a GM hormone, honey comes from bees working GM crops, and some vitamins include GM ingredients.

The third article I chose to read has to do with the labeling of genetically modified foods. In March of this year, Whole Foods Market, Inc. announced that all GMO products sold in Whole Foods stores in the United States and Canada would be labeled by 2018. In contrast to the United States and Canada, more than 60 countries, including Australia, Brazil, China, Russia, South Africa, Turkey, and the 27 members of the European Union, have already implemented mandatory GM food labeling standards according to the Center for Food Safety.

There is a widespread consumer interest in favor of GM food labeling that should be taken into consideration by the FDA, given its charge to protect and promote public health. The FDA does not have the regulatory authority to require such labeling because “special labeling for genetically engineered foods is not required under section 201(n) of the [Federal Food, Drug, and Cosmetic] Act if the sole justification for such a requirement is consumer demand.” In the summer of 2012, a proposed amendment to the farming bill that would permit States to require that any food, beverage, or other edible product offered for sale, have a label on indicating that the food, beverage, or other edible product contains a genetically engineered ingredient.

The amendment failed to pass by a vote of 26 to 73. There are grassroot organizations throughout the United States that are arguing to get GM foods labeled in the U.S. To date, there are currently eighteen states actively pursuing legislation. Some states, including Illinois, Iowa, and Missouri, are trying to get genetically modified foods labeled in the United States. There are however, constitutional challenges on the grounds of commercial speech protection provided by the First Amendment, and a legal precedent set by the Supreme Court in its 1980 Central Hudson Gas & Electricity Corp. v. Public Service Commission of New York ruling.

I found that even though one of the articles contradicts the documentary, all of them provided important information about the genetically modified organisms. Each article gives you more information about GMOs, about organizations that are pursuing the stopping of genetically modified foods and organizations that are fighting to get GM food labeling in the United States.

The United States FDA seems to be more relaxed in their requirements on food labeling and the research that is being done on GM crops than in the European Union. The E.U. appears very concerned about the health and safety of their population compared to the U.S., as there are chemicals in foods in the U.S. that are banned in other countries.

Seeds of Death Unveiling the Lies of GMO. (2016, May 07). Retrieved from https://studymoose.com/seeds-of-death-unveiling-the-lies-of-gmo-essay 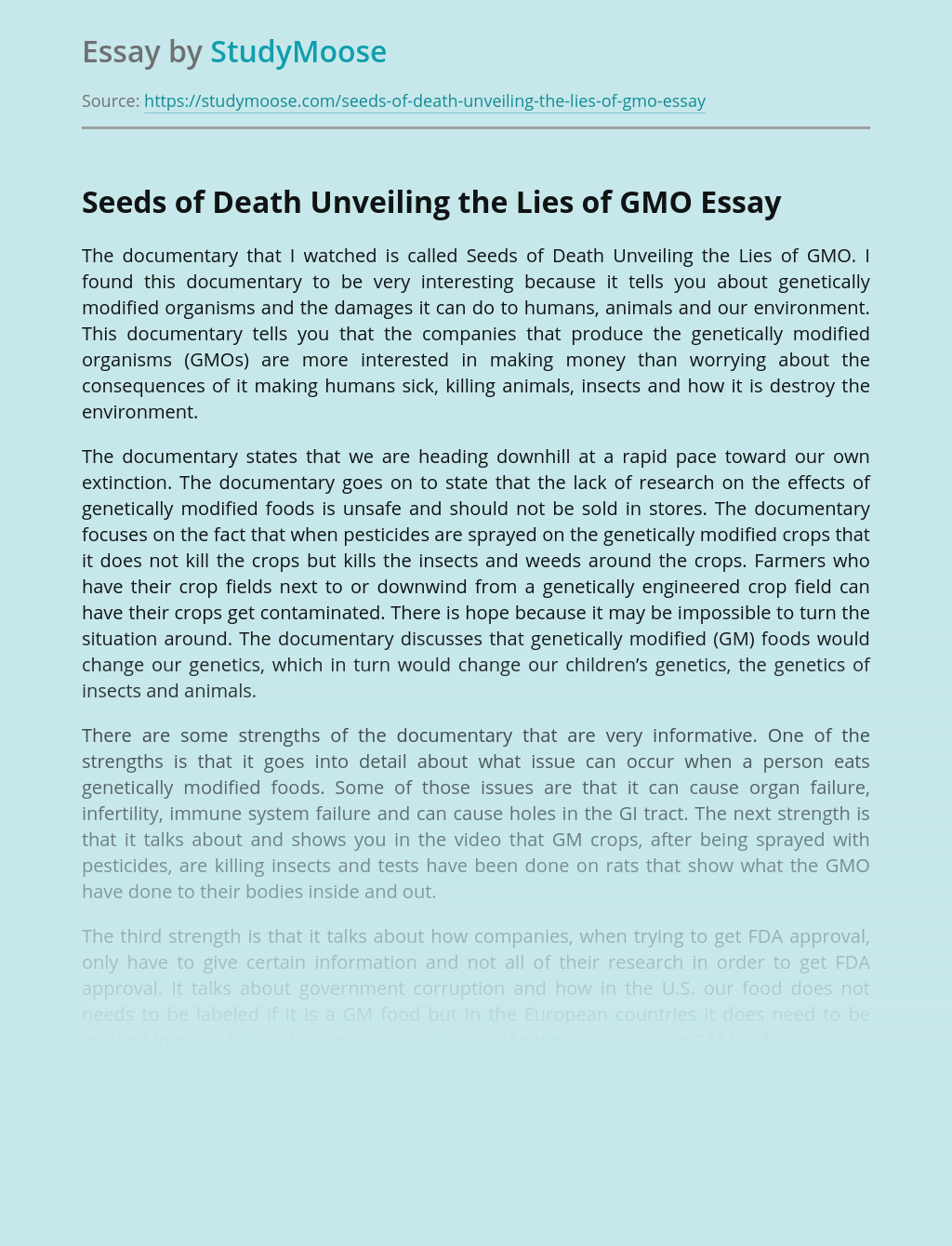 Rate this post Genetically modified (GM) foods are foods derived from organisms whose genetic material (DNA) has been modified in a way that does not occur naturally, e.g. through the introduction of a gene from a different organism. Currently available GM foods stem mostly from plants, but in the future foods derived from GM microorganisms...

Rate this post Our ancestors first cultivated plants some ten thousand years ago. They domesticated animals later and then selectively bred both plants and animals to meet various requirements for human food. Humans discovered natural biological processes such as fermentation of fruits and grains to make wine and beer, and yeast for baking bread. Manipulation...

Rate this post Never before in history has mankind so masterfully commanded its food chain. Thousands of years ago, much of our species made the leap from a hunter-gatherer level of subsistence to an agricultural society. With agriculture, slowly but surely many modifications were made to plants and animals used and domesticated by us for...

Rate this post Genetically modified (GM) foods have been around for thousands of years. In the 1990s, they started being sold commercially in the United States, which was the start of this controversy: Are GM foods good or bad for us? Do the pros outweigh the cons? In my opinion, genetically modified foods are nothing...

Rate this post “When you light a candle, you also cast a shadow. ” – Ursula K. Le Guin. No matter what good some people believe they are doing, everything seems to come with a consequence, and the question is whether or not the good overpowers the bad. Many experts argue that Genetically Modified foods...

Rate this post “By bringing in this technology to make the same crop that people eat and grow, make it more insulated against some of the elements of nature, more nutritious… it will improve local production,” said Channapatna Prakash, professor in plant molecular genetics at Tuskegee University, Alabama. “If it does make a difference in...

Rate this post We often see the availability of food as something that is always there – with supermarket shelves always being fully stocked up and access to any type of craving at any given hour. However, there are background struggles in providing access to food to everyone around the world as there are people...