Second, Many people think that science fiction is relatively new because these past few centuries have been the most scientific of all time… how long has science fiction been around.

Another writer, Diana Herald, said that, “Science Ruiz 2 fiction deals with scientific topics, space travel, aliens and recognizably Earth-variant worlds or life forms that have not been touched by magic” (Cramer 1) [the quote was actually said by Herald but mentioned in the article by Cramer]. It is obvious to see that all writers have very different opinions on how science fiction is classified. But the differences in science fiction are much like the differences in monotheistic religions.

In the three major monotheistic religions; Judaism, Christianity, and Islam; the small little differences are in a large quantity and vary in every form. However, the main idea, or the belief in one god, is existent in all. Similarly, while there are many minor differences most definitions include the fact that they most often have intellectual content, technology that does not yet exist, and scientific themes. [there is no source, this is my idea] Within science fiction, however there are many subgenres, for example, military science fiction (Goldshlager 1).

This subgenre refers to a science fiction story with an army unlike todays, “Basically, the armed forces in space” (Goldschlager 1). Another is ‘hard science fiction’, or a Sci-Fi novel written by a writer with heavy knowledge of science who provide well researched possible future science in their novels (Goldschlager 2). One could spend months simply naming subgenres of science fiction. In modern writing how can one tell the difference between a science fiction novel and a fantasy novel? First one must know exactly what both are.

Fantasy, or fantasy fiction, is known as a story that could not happen in reality, most commonly having to do with magic and mythical creatures (Herald 1). “In Fantasy Fiction readers are allowed to visit a world they never would have been able to otherwise” (Herald 1). Like the science fiction genre it is filled with subgenres, including ‘Dark Fantasy’, ‘Sword and Sorcery’, Ruiz 3 and ‘Fairy tales’ (Herald 2)).

All of these subgenres are a little bit different. For example, Dark Fantasy is “the conflict between good and evil…. ut focusing more on the evil elements and is more terrifying than other subgenres” (Herald 2). However, the Sword and Sorcery subgenre sounds similar but is slightly different, “It features battles against evil, usually starring a protagonist with humble beginnings who learns he possesses magical powers” (Herald 2). If one knows the definition of both genres it is extremely easy to compare. Fantasy fiction is basically something that could never happen, while science fiction attempts to have at least some possible knowledge. People get this confused for two main reasons.

One, they simply don’t know the definitions of these two genres. Two, some people have no idea what is somewhat possible and what is not. One important thing to remember is that if it has magic… it’s probably fantasy. Another question that so many people have is “how long has science fiction been around? ” Many believe that science fiction is a relatively new creation, but it actually has its roots in ancient history. One of the very first ‘science fiction’ novels was in fact written around the 2nd century. (Franklin 1).

The heroes of the novel The True History are sent to the moon nd witness an epic battle between the colony of the moon and the colony of the sun over the control of Venus (Franklin 1). However, “Lucian’s works are not science fiction. They were intended to be read as fantasy” (Franklin 1). Later, when major discoveries were made in the 15th and 16th centuries; such as the discovery of the new world, the discovery that the earth was round, and the invention of the magnetic compass; discovery was a subject of great interest and many of the real first science fiction novels were written. (Franklin 2).

Soon, “Marvelous voyages to the Moon, planets, Ruiz 4 and stars became commonplace. (Franklin 2). For example, Johannus Kepler used his own discovery of the basic laws of planetary motion to write a novel about life on the moon (Franklin 2). Another example is the novel of Francis Godwin who, “ describes a utopia on the Moon in The Man in the Moone” (Franklin 2). Science Fiction has been around for much longer than people realize, but it is of no surprise to discover that it was made in a time of such revolutionary discovery. One of the greatest science fiction novels of all time was the historic Frankenstein written by Mary Shelley.

It was a timeless classic and one of the first novels to be mentioned when the topic of science fiction arises. But what makes this novel a science fiction novel? It could just as easily be a fantasy could it not? The idea of a monster bestowed with life sounds fictitious, does it not? In fact, many people today disagree with the fact that it should be called science fiction. Dr. Bob Throwbridge said, “Although Frankenstein had a profound impact on the science fiction genre, the plot itself had little to do with science. The science was mainly a plot device.

The focus of the story was the arrogance of humanity to try and [imitate god]” (Throwbridge 1). There are many things throughout the novel that point out the science in this classic text. One of the most obvious examples of the science in this novel is the actual creation of the monster. In theory making a creature would not be an extraordinary challenge for one with a good knowledge of the human anatomy, the only thing missing is the actual creation of life. However, Shelley uses a great connection of science, especially for her time, and that is Galvanism.

In medicine, “Galvanism is any form of medical treatment involving the application of electrical pulses to stimulate the movement of muscles” (Kemp 1). In her Ruiz 5 novel Shelley implies that Doctor Frankenstein used this theory of Galvanism to finally bring the creature to life (Shelley 81). Although the Galvanism technique could not work to bring a dead person back to life, it was a very scientific guess and resembles the work of modern day science fiction like that of such great authors like Michael Crichton.

Michael Crichton, one of the greatest science fiction writers, wrote The Andromeda Strain a book in which Astronauts venture to the deep regions of space but upon returning bring a deadly virus upon mankind (Walton 1). When this was written scientists were extremely cautious about going to space because they were afraid of exactly this happening (Walton 1). Science fiction also brings entertainment. For years people read science fiction to read of marvelous stories and tales that stretched the imagination. And now due to advancing technology we can watch science fiction movies and TV shows that capture its audiences. 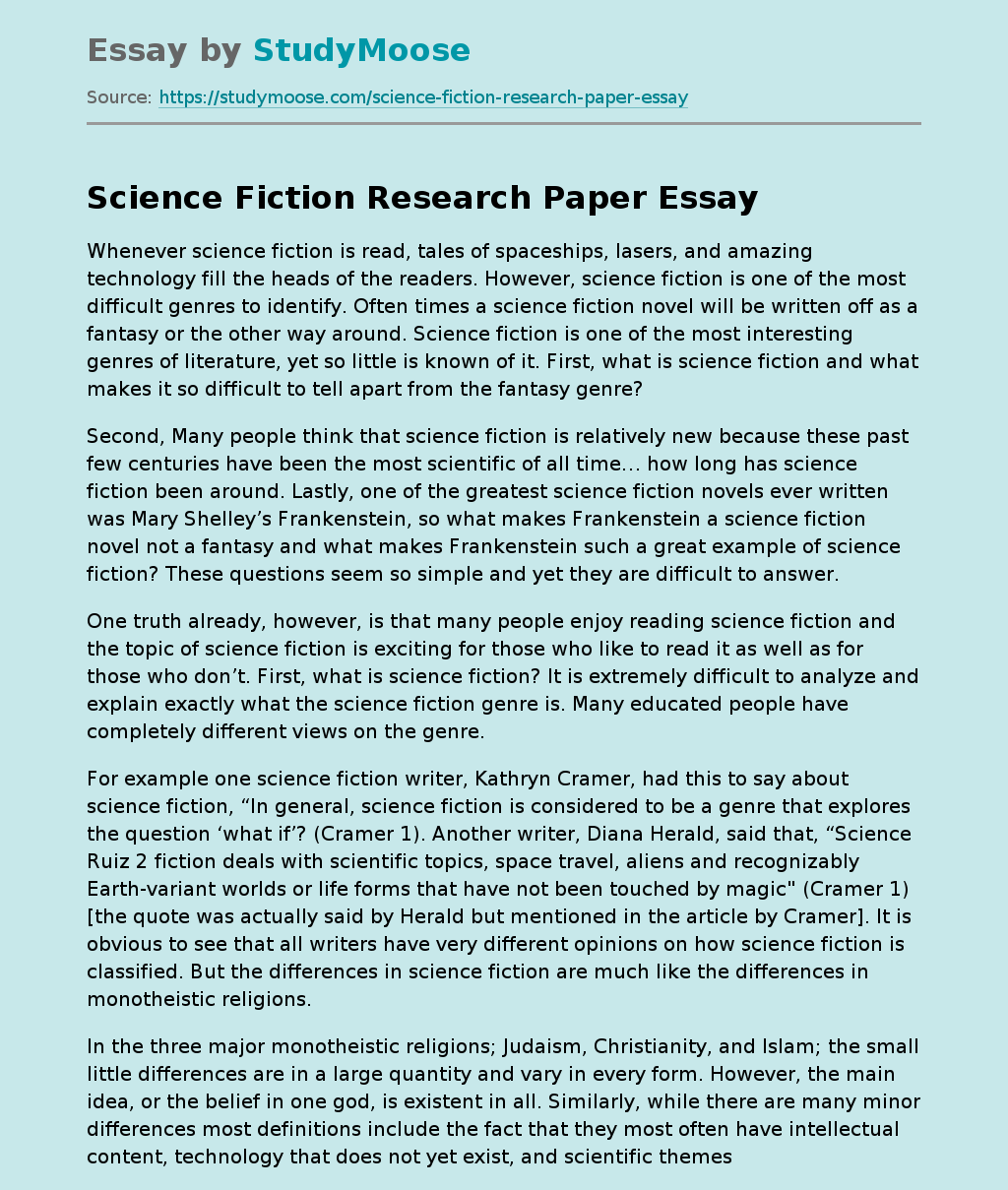