Science and Technology in the 1920's

The Roaring Twenties was a decade full of advances in many aspects. A big part of these advances were scientifically and technologically related. Medicine went through revolutionary changes during these years, so did electrification and cars. Some new inventions also became popular very quickly such as Broadcasts.

Throughout the 1920’s there were different medical discoveries. A new type of drug to fight infections and viruses was discovered called the sulfanilamide drug. This drug and its different derivatives were known as Sulfa drugs.

Don't use plagiarized sources. Get your custom essay on
“ Science and Technology in the 1920’s ”
Get custom paper
NEW! smart matching with writer

Sulfanilamide was tested on mice first, and because of it success, it was tried on a baby dying from an infection, obtaining positive results. These drugs became very popular and useful, along with the recently discovered antibacterial drugs. Medical advances did not stop there, vitamins A, B, C, D, E, K, and V were also discovered during this period of time.

However, the most important medical discovery during the 1920’s is Insulin. Dr. Frederick Banting and Charles Best created this pancreatic extract capable of treating diabetes.

They tested their discovery on diabetic dogs, and then they used it in a fourteen year old kid, making the experiment successful. Insulin is still used until this day.

In the Roaring Twenties, electrification and cars took a step forward. Windmills with airplane propellers were used to give electricity to several machines used in these time. This invention generated enough power to make washing machines, lights, refrigerators etc. work. Similar to this, AG&G introduced a plant to reheat steam, so that the amount of electricity generated from raw material would increase.

Before the 1920’s, cars were not a big deal among people. However, soldiers who fought in WWI bought cars when they returned from the war; this made people realize how easy it is to travel that way, and suddenly everybody wanted one. The most popular car brand in the United States was Ford, since before their Ford model T, cars were extremely expensive.

Between 1923 and 1930 sixty percent of American families acquired radios. Families gathered around at night to hear the radio for entertainment.One of the most popular radio stations was Chicago’s first station, KYW. It begun in 1921, and It broadcasted opera six days a week. After the opera season ended, they started broadcasting many different things, such as classical music, sporting events, lectures, fictional stories, weather reports, newscasts, etc. Soon, the United States had around 600 radio stations, showing us how popular broadcasts were in the USA, and how quickly it became something huge.

The Roaring Twenties was a period of many scientific and technological developments. Without some of the discoveries made during this time, medicine would’ve not progressed, nor electrification, cars, or new inventions such as the radio. 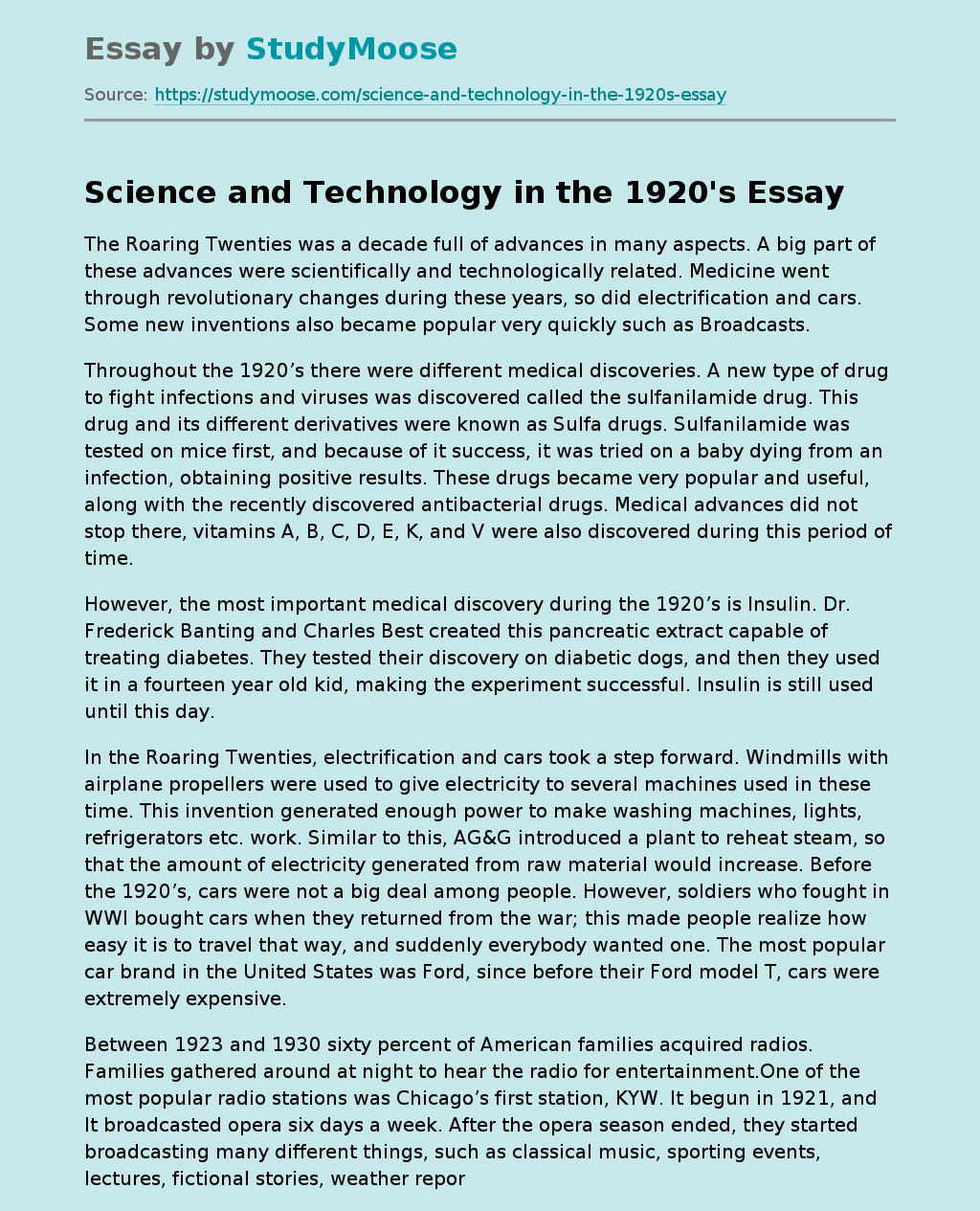