Each year thousands of students across U.S. schools are being injured while participating in school sport programs. It is reported that seven million high school athletes participate in high school sports thus making them the largest group of athletes at risk for suffering concussions and their related consequences (Doucette 503). An astonishing forty-six percent of emergency room visits are for sports-related concussions for adolescents ages 14-19 (Valovich 131). Even though it is not life-threatening, adolescents who are suffering from concussions can expect a full recovery, but this age group is at a higher risk for prolonged recovery (Davies 16).

Don't use plagiarized sources. Get your custom essay on
“ Schools Fail to Protect Student Athletes from Concussions ”
Get custom paper
NEW! smart matching with writer

Many concussion symptoms can last days, weeks, or longer. As recently as 2017, the Youth Risk Behavior Survey reported that 2.5 million high school athletes suffered sports-related concussion injuries (Blackman and Garcia). In response to the alarming trend, sports-related youth concussion legislation passed in all 50 states in 2014. It identified the need to address concussion management in youth athletics. The continued growing number of incidences of concussion injuries suffered by student-athletes each year is indicative that far too many school districts across the United States are still not doing enough to protect their students.

A concussion is a type of traumatic brain injury. Currently, there is no universally accepted definition for a concussion injury that occurs during sport-related practices or games. It is often simply referred to as a sports-related concussion or SRC. The Centers for Disease Control (CDC), the leading national public health institute of the United States, have defined all concussions as a “bump, blow, or jolt to the head or by a hit to the body that causes the head and brain to move rapidly back and forth” (CDC.

gov). This devasting injury can occur in a matter of seconds with a single bump or blow to the head or body. During impact, the brain is pushed against the inside of the skull and can be bruised. Even though the brain is surrounded by cerebrospinal fluid and protective membranes called meninges to protect it, it is only equipped to handle light trauma impacts (Britannica.com). Imagining the force of impact on your body when involved in a collision while driving. Your seatbelt restricts your movements thereby limiting your body from contact with objects. In the case of a concussion, the impact is often so severe that the brain is not cushioned by the fluid and is violently moved back and forth in reaction to the forces against it. The initial signs of a concussion after impact can include appearing dazed or stunned, forgetting an instruction, dizziness, and even losing consciousness (CDC.gov). These symptoms can appear briefly or be without proper training, or even missed all together. In the case of adolescents, additional symptoms may not show up for hours or days. The concussion graphic (NATA.org) shows that symptoms can include headaches, blurry vision, sensitivity to light or noise, confusion, behavioral and mood changes such as irritability, sadness, anxiety, and changes in sleep patterns.

Concussions are a common occurrence in many sports. Sports-related concussion injuries of high school athletes has been estimated at 2.5 million high school students (NCSL.org). It can happen in any contact sport, including football and lacrosse; in limited-contact sports, like basketball and baseball; and even non-contact sports, such as gymnastics. In a recent study it was estimated that nearly 33% of concussion in athletes still go unreported (Davis 17) indicating that student-athletes and coaches, and by extension, school districts, may not fully realize the consequences of an untreated or partially treated concussion. The Centers for Disease Control shares multiple stories on their website of adolescent players suffering the consequences of playing with concussions they are not fully recovered from. One example is Shelby, a junior competitive cheerleader who sustained a concussion while being tossed in the air. Her head collided with a teammate’s. Shelby was cleared to return to competition five weeks later only to sustain a second concussion when her head hit the ground during a failed stunt. Her symptoms this time were more severe. In discussing her experience, she stated “I feel like I’m never going to find myself the way I was…I [should] have waited longer to go back to cheerleading after my 11906252952750first concussion”.

Far too many students don’t think that concussions are very serious. As many as seventy percent of high school athletes with a possible concussion reported playing with symptoms (CDC.gov). To avoid losing their position on a team, jeopardizing their future sports career, or letting teammates or coaches down, they didn’t report their symptoms. Another example from the CDC website references high school basketball junior Tracy who collided with a teammate on the court and hit her head. The next day at school she experienced symptoms of nausea, dizziness, and blurred vision. She decided, as a starter, that playing was more important, so she stayed in the game. “I didn’t want to tell the trainer [be]cause he would sit me out of the game. So, I kept quiet…”.

Adolescents don’t often have the maturity level to be an advocate for their safety and wellbeing. They falsely believe that they are invincible and don’t understand the ramifications of a concussion on their developing brains. Four in ten players said their coaches were unaware they had a possible concussion (CDC.gov). Cole, a high school wrestler, sustained a concussion when a teammate rolled over and landed on top of his head. He complained that his head hurt and after a concussion diagnosis by this primary care doctor he was instructed to rest and not return to wrestling for about a month. Cole disregarded his doctor’s advice. “This was certainly one of the worse decisions I have made. It’s been several months and I’m still recovering,” said Cole about the lasting consequences of the dismissive decision (CDC.gov).

Historically, the culture surrounding competitive sports has been to shake off injuries in order to place the good of the team ahead of the player. We can see it with professional sporting events, like the NFL, when fans cheer as their player rises to their feet from what appeared to be a career sidelining injury. A 2013 study published by the American Academy of Pediatrics found 25% of high school football players said they had suffered a concussion and more than 50% admitted they would continue to play with symptoms (Kane 219). Despite this prevalent culture of ignoring concussion protocol, school districts have a direct duty of care and should implement a heighten responsibility of such to protect their adolescent athletes.

To address those concerns, all fifty states have enacted various sports-related youth concussion legislation that cover (1) concussion education and informed consent, (2) removal from play, and (3) return-to-play guidelines to protect student-athletes (Lowrey). But not all laws are created equal. According to the traumatic brain injury in youth sports fact sheet (Lowrey) all fifty states have established some version of return-to-play restrictions and medical clearance. At first glance, it appears that student-athletes are protected by laws that direct how and when they can return to playing sports. This appearance of protection is misleading as only thirty-five states have mandated that coaches undergo concussion training. Therefore, fifteen states don’t require their coaches to have any training in recognizing the subtle symptoms of concussions. The lack of training requirements for coaches puts student-athletes at risk for not being removed from play after a concussion or returning to play too quickly. Tragically, those states that have laws in place find that they are unable to enforce them. “Laws are passed with good intent but organizations like schools that are mandated to implement these laws are often not resourced to do so,” said Dr. Monica Vavilala, of the University of Washington Research Center (Rapaport).

Research continues to show that even with the return-to-play concussion laws in place, there is a lack of education surrounding sports-related concussions in youth athletes. Sixteen states failed to include legislation requiring the education of youth athletes or parents about the signs and long-term effects of sports-related concussions (Lowrey). According to the CDC, parents are still not familiar with their school’s protocol on when student-athletes can return to play or even when they are cleared to go back into the classroom. There are many educational resources available through the CDC’s Heads Up initiative, all for no costs, for school districts to educate student-athletes and parents informed of the signs and treatment of sports-related concussions. Players should be taught how to recognize and respond to suspected concussions in themselves as well as what to look for in their teammates. Players are more apt to witness a concussive blow that a coach may have missed or hear of teammates complaining of dizziness in the locker room. Parents often know when their child is behaving differently, even if they don’t know the cause. Education is the key to getting the immediate necessary medical care.

The lack of consistent or any training is the reason that schools should be using computerized neurocognitive tests to assess sport-related concussion. Diagnostic tools like Impact Immediate Post-Concussion Assessment and Cognitive Testing (ImPACT) are used to gather data on an athlete’s pre-injury condition. If a student-athlete is believed to have experienced a concussion or has been diagnosed with one, they can be retested. This twenty-minute test aids in the decision process of allowing players to returning to play (Lueke 488). These tests can help detect symptoms that the athlete or coach or parent may not initially recognize. ImPACT testing is a simple cost-effective solution that could help schools protect their students. Despite the availability of this critical concussion detection tool, only 40% of United States high schools use computerized neurocognitive tests when assessing sports-related concussions, according to researchers at Children’s Hospital Boston (Nationwide Childrens.org).

The overwhelming research shows that a high incidence of sports-related concussion in youth athletes is a continuing public health crisis. An unreported and not medically treated concussion can have lasting effects on a student athlete’s brain and body. This underscores how critical it is for student-athletes and parents to be proactive in concussion prevention, detection and treatment. Schools are failing to see the need for a universal education of coaches, athletes, and parents that fosters a culture of recognizing and reducing the dangers of concussions in high school sports and therefore failing to protect their student-athletes. 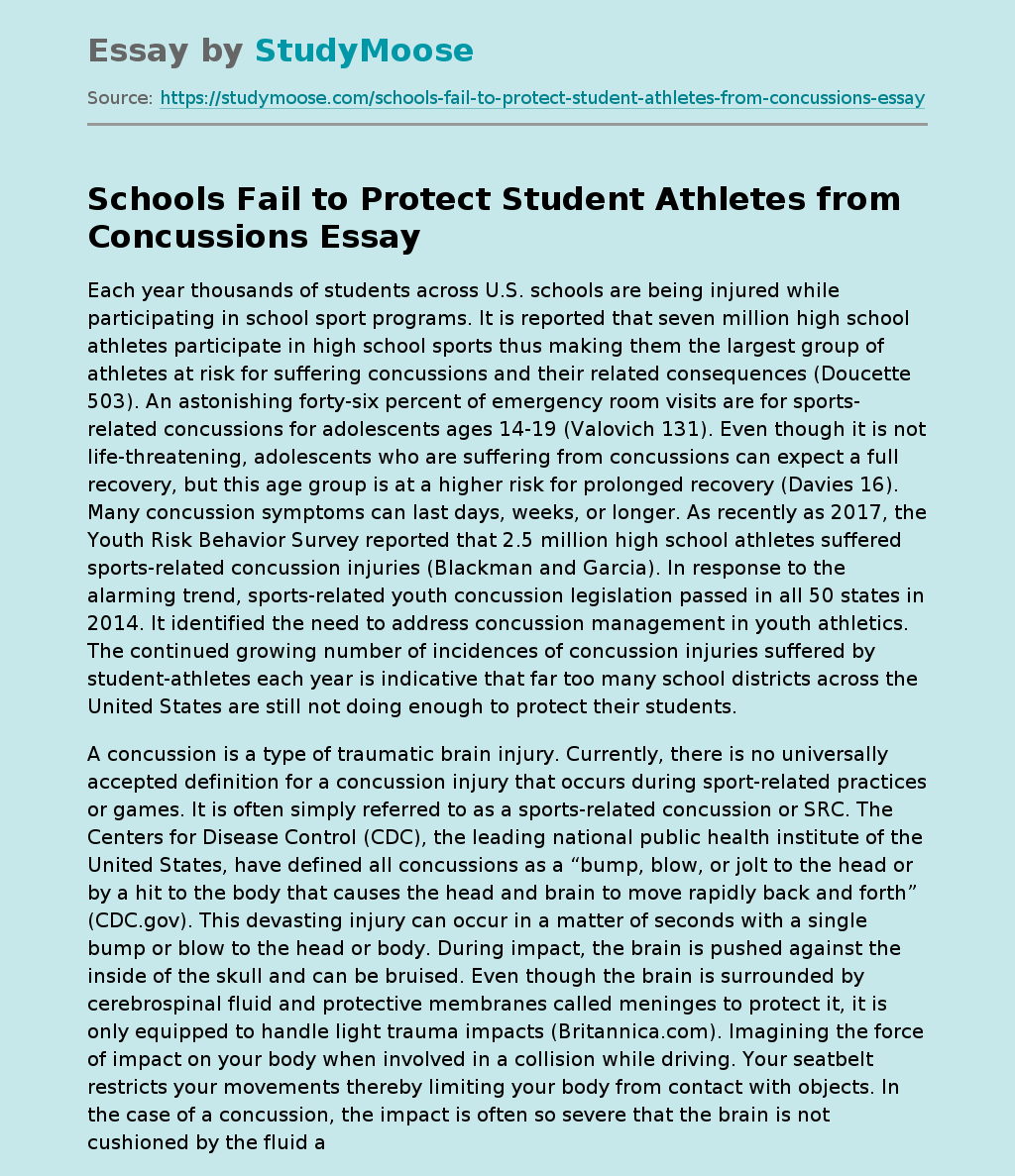