“RULES ARE THERE TO BE FOLLOWED. WITHOUT RULES NOTHING GETS DONE.”

It seems that in today’s world rules are everywhere. For instance, type a quick search for “rules” into the Google search engine and you will return over 604 million web pages that mention rules. One can find sites which outline rules on correct Internet usage to rules on ordering Mail Order Brides! Undoubtedly rules are quite important in the everyday running of our lives and yes, rules are there to be followed, but in my opinion to say, that without rules nothing gets done is akin to saying that without cutlery no one would eat.

Don't use plagiarized sources. Get your custom essay on
“ School rules ”
Get custom paper
NEW! smart matching with writer

Along the same line as rules, cutlery has evolved from being quite rudimentary and has been transmogrified into an over elaborate, almost unnecessary feature at some of the more upper crust dinner parties and at the more elegant restaurants and diners where up to 14 pieces of cutlery are commonplace. This is quite similar to the whole concept of rules which have grown increasingly more complicated with the rise of big business over the last few centuries.

Management is growing increasingly more worried about following correct protocol and ensuring that they follow the rules to the point of absurdity. Upon researching for this project I found many amusing anecdotes detailing the complete lunacy, with which rules are followed in various different organisations. School rules and regulations are made not to be broken. Rules are made for the safety and better welfare of the students in school.

Another is to promote good behavior among students and to maintain the good image of the school. Parents send their children to school in order for them to learn not only academic values, but also moral values. Implementing school rules will help the students mold their character and values expected from them by other people.

There are certain factors why nowadays, students tend not to follow rules disseminated by the school despite of the punishments they will have to face for doing such actions. Some of the reasons are as follows: peer pressure, drugs, poverty, homelessness, low self esteem, lack of love, boredom, bad instructions, unclear rules, unclear expectations, psychological problems, lack of parental supervision and guidance, and media influences.

Let us try to consider the saying, “MASARAP GAWIN ANG BAWAL.” According to some students, breaking rules is a part of every teenager’s life especially in high school. Because this is the period where you will find your true peers and get to know more about life. They say that it is not bad to break rules when you don’t get caught doing it because it is part of one’s challenge. And there goes your second attempt of doing it again.

Use of illegal drugs another factor why a student gets away with the rules. Any person under the influence of drugs sees no reasons at all. They become more aggressive in anything, uncontrollable, think unreasonably and act strange. Drugs have different effects in every individual, but one thing in common, is that drugs makes a person quite disillusioned and do whatever he wants to do though he knows he is breaking what is right.

An individual that has no enough funds to sustain himself or his family is capable of doing what is wrong. Because he lacks something, he becomes desperate and in that way, he thinks and acts differently…. School rules are quite important because they are made for the safety and better welfare of the students in school. It is mainly used to promote good behaviour among students and to maintain the good image of the school. School rules are very important because without rules and boundaries, the students will freely do whatever they please. So, to set boundaries and limits, school rules are important. School rules are important because there are hundreds of children inside of a school and safety is a concern. Rules need to be followed in order to keep things in line. School rules are important because they create an expectation for all students. Without rules, some kids might not show up on time or do their homework. There are lots of reasons why we need school rules. Here are a few of them. First you need rules so that you won’t get hurt in fights like breaking your arm or leg. Classroom rules may include everything from warnings against throwing things to a prohibition against fighting. These rules hold special importance because, generally only one supervisor Childhood is a totalitarian regime, and schools are the mental concentration camps. Education is described by the mis-educated as real-life preparation; in actuality, schools train people to accept a society where the government and other institutions tell us what to think and do. Experience is the best teacher, and the purpose of school is to prevent experience.

How School Rules Contradict the Idea of Freedom

If school attendance were voluntary, schools would have to reform themselves to meet students needs, because if students could leave on a whim, schools would suddenly have to prove their worth. But by not giving us a choice about whether to accept the government’s favors early on, we all unwillingly sign a contract with Uncle Sam that says: “Since you did so much for me in my early years, I’ll return the favor by letting you take away half of my money and tell me how to live my life.” Because kids grow up in an oppressive society, it’s predictable that when they leave the controlled world of childhood, they vote for politicians who promise security instead of freedom.

Few adults understand freedom and individual rights because we’re taught about the Declaration of Independence, The Constitution, and the Bill of Rights in school, the most authoritarian environment in America next to prisons. Kids learn early on that even in a free country you are mandated to sit in cramped desks, read, write, and listen against your will. If you think for yourself in school, you get bad grades, and that’s why America doesn’t notice the government stripping away our rights. When our minds are impressionable, we learn that freedom means taking orders. Government officials should not teach the Bill of Rights until they’ve read it for themselves.

The compulsory education system hasn’t changed because it’s insidiously self-promotional. People are told over and over that school is necessary for success, so almost all graduates, and even dropouts, believe it. Selective memory and propagandic yearbooks help adults… School rules and regulations are made not to be broken. Rules are made for the safety and better welfare of the students in school. Another is to promote good behavior among students and to maintain the good image of the school. Parents send their children to school in order for them to learn not only academic values, but also moral values. Implementing school rules will help the students mold their character and values expected from them by other people. 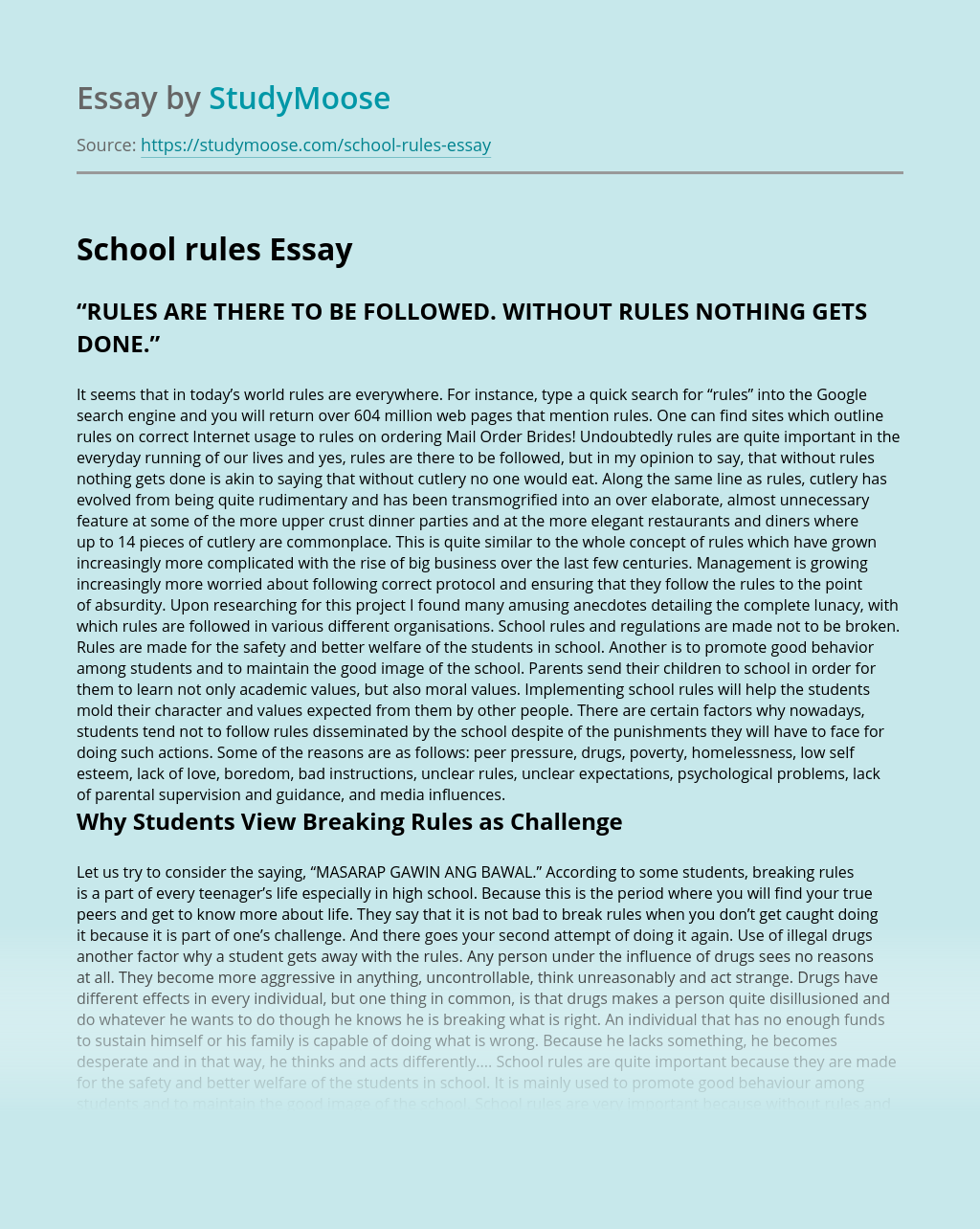