In the story “Saving Sourdi” May-Lee Chai expresses the theme coming of age through the eyes of a young girl Nea who desperately tries to save her older sister as she becomes more mature and grown up. Nea is faced to deal with situations where she feels a need to save her older sister Sourdi from the people around her. As Sourdi begins to distance her self away from the family the differences between the two girls begins to show. Sourdi becomes more mature, gets married and starts her own family.

Don’t waste time
Get a verified expert to help you with “Saving Sourdi” by May-Lee Chai Short Story Review
Hire verified expert
$35.80 for a 2-page paper

While Nea’s character reveals herself as a selfish immature girl. Chai reveals how the sister’s close relationship changes as the girl’s maturity level changes. Chai begins the story with a chaotic situation that reveals Nea’s immaturity level. Sourdi and Nea were the only two girls in their families restaurant when a man “staggered up and put his arm across Sourdi’s shoulders” (69). In response to the distress Nea saw her sister in she “grabbed and ran back out to Sourdi.

Get away from my sister! I shouted, waving the paring knife. The men were silent for about three seconds, and then they burst in to laughter. I charged and stabbed the man in the sleeve.”(70). By starting the story with Nea’s first pursuit to save her sister Chai defines the main characters immature nature. Nea’s lack of rational thinking and acting on impulse reveals how young she truly is. Even though her sister was the one being harassed, the reacted to the situations very differently.

After Nea’s actions she still hopes for some one else to take control of the situation. “I thought Ma would take care of everything now. And I was right she did, but not the way I had imagined”(70). Nea’s immature nature is still prevalent even after she stabbed the man; she believes that her mother would acknowledge that she did the right thing.

Chai reveals the difference between the two sisters way of thinking when Sourdi says, “They could take you away. The police, they could put you in a foster home. All of us”(71). This is the first time where Nea realizes the consequences that could have happened because of her actions. Along with Nea’s inability to think rationally Chai reveals her immaturity by establishing a difference in the way the two girls feel about relationships with men. Sourdi’s first relationship with a boy is one of her coworkers Duke.

“He tried to put his arm over her shoulder, too. I was going to push him away, when Sourdi did something very surprising. She put both her arms around his neck and leaned against him, while Duke said soft, dumb-sounding things that I couldn’t quite hear. Then they were kissing”(73). Nea reveals that she could not believe that her sister was experiencing physical attraction for a boy. When she saw them kissing she “felt like running, screaming, for the road” (73) causing her to react to the situation in a childish manner. Even though she is surprised by their relationship she still desires to remain close to her sister. When Sourdi plans to run away with Duke, Nea plans on going with them.

Sourdi’s true coming of age is when her mother arranges her marriage with an older man. Her mother’s perspective on marriage and status reveals a turning point in the life of both of the girls. Sourdi is forced in to a marriage with an older man, who is established even though she is only eighteen. Even though her mother went through the same thing Nea is disgusted by the thought of Sourdi marrying such an older man. As Sourdi becomes mature and moves on to the next chapter of her life Nea remains immature. Nea begins to fabricate that Sourdi is in danger and she needs to save her. When Nea reaches Sourdi’s house to complete her mission she is greeted with “identical expressions of non comprehension that I had to laugh” (82). Nea’s reaction to her sisters confusion reveals that she was acting on impulse.

Sourdi distinguishes the difference between herself and her sister when she says “I’m a married women. I’m not just some girl anymore. I have my own family” (83). The events in the beginning and end of the story are both caused by Nea in an attempt to save her sister. Through out the story Sourdi changes from a young girl to a married woman with children. While Nea remains an immature girl acting on impulse in a desperate need to hold on to the relationship with her sister. In the end Nea believes that “she had made her choice and she hadn’t chosen me”(84).

Chai reveals that even though the two girls are sisters the differences between the girls in unaffected by the changing of their maturity level. Chai ends the story with story that Sourdi had told Nea. It was about “a magic serpent, the Naga, with a mouth so large it could swallow people whole” (84). Nea’s sense of immaturity remains constant through out the story while she tries to control the relationship she has with her sister. Nea hopes for the ideal world where they will always remain together. When she realizes that her sister is living her own life she wishes that she could “swallow the whole world” (84) in an attempt to escape from the reality of her sister growing up. 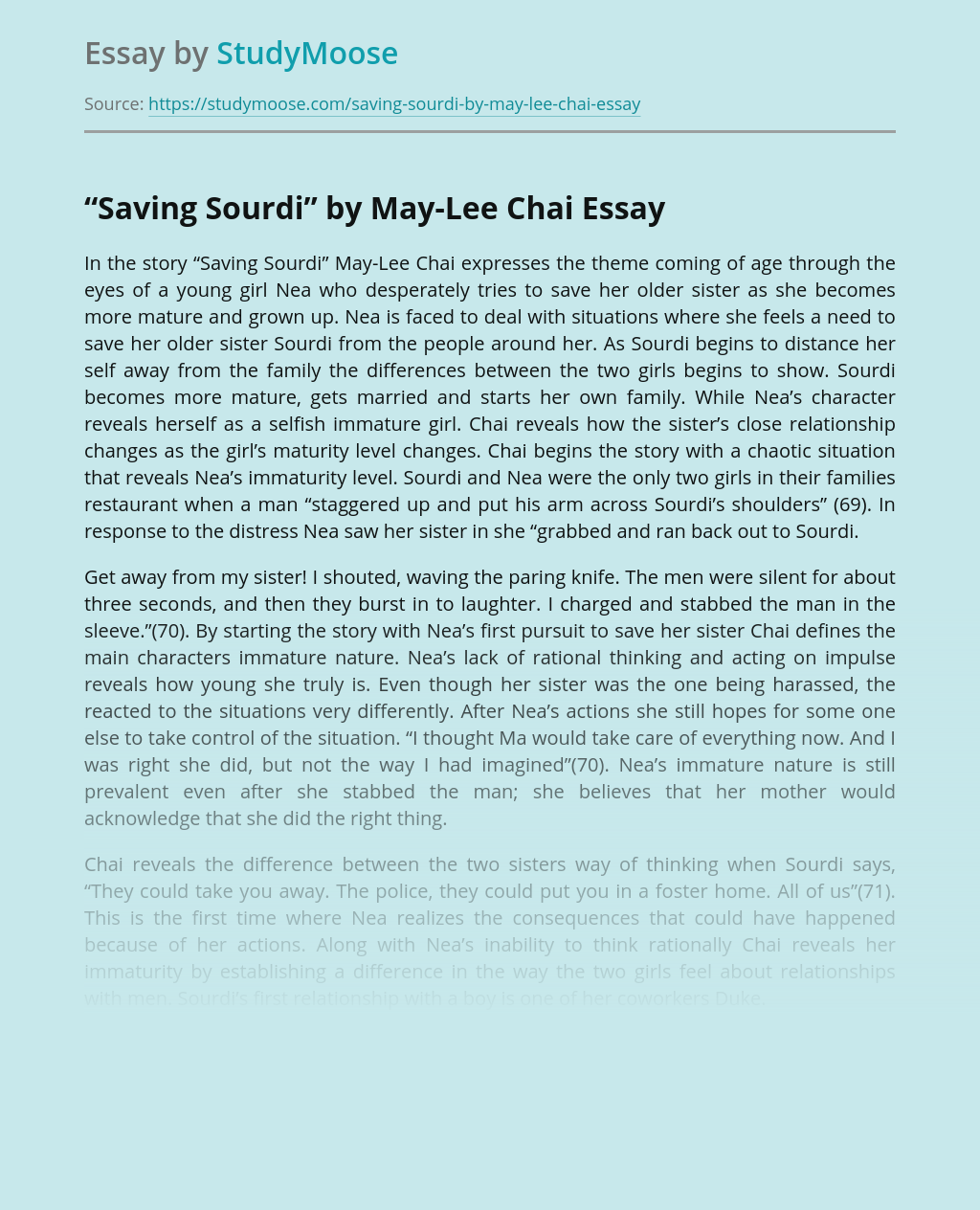