Food deserts are regions within a country where there is little access to fresh and healthy foods such as fresh fruits and vegetables. The United States Department of Agriculture defines food deserts or low-access communities as areas where “at least 500 people and/or at least 33 percent of the census tract’s population must reside more than one mile from a supermarket or large grocery store (for rural census tracts, the distance is more than 10 miles)” (Gallagher, 2010). Communities that are part of food deserts generally have similar characteristics.

Don't use plagiarized sources. Get your custom essay on
“ Сauses and Сonsequences of Food Deserts ”
Get custom paper
NEW! smart matching with writer

Many food deserts tend to have smaller populations, leading to decreased desire for supermarket chains to establish stores, higher rates of abandoned properties than other areas of the country, a higher rate of unemployment than the national average, lower income, and the residents of these areas tend to have lower levels of education. One specific example of a food desert can be found in the city of Chicago. According to a report by NewsOne, entitled ‘America’s Worst 9 Urban Food Deserts,’ “it is estimated that some 600,000 people live in areas considered food deserts”(NewsOne 2011).

In the report it goes into depth on how it is the Black communities of Chicago that are the more likely located in food deserts and from these neighborhoods, it is much easier for residents to reach a fast food restaurant than it is to locate a grocery store which tend to be twice as far away as the restaurant. The human implications of the food deserts in the Chicago case then is that people may become more prone to health issues associated with the consumption of non-nutritional foods, such as diabetes, obesity, and cardiovascular problems.

In fact, the report even referenced the fact that individuals of communities located within a food desert in Chicago are more likely to die of cardiovascular disease than other Chicagoans.

Food deserts lead to a variety of implications from not only a social and cultural scope, but an economic one as well. In terms of a social and cultural context, the biggest implication is in terms of health. Obesity and diabetes are two of the biggest health concerns amongst Americans today, and according to the United States Department of Agriculture, “counties with the highest percentage of households living in food deserts (10 percent or more) had rates of adult obesity in 2008 that were a full nine percentage points higher than counties with the lowest percentage of households in food deserts(1 percent or fewer households)”(Chinni, 2011). Another implication is that food deserts are disproportionally located in areas where there is a high concentration of people, such as urban areas, or a low concentration of people, like rural areas. Suburbs around cities do not suffer as much from food deserts as other types of communities. This also then means that food deserts disproportionally affect the various demographics that make up America. Rural and urban settings are more likely to be home to minorities, people of low income, and people of low education levels, as the white, educated, upper and middle-class segments of the American populous flock to the suburbs where food and space is a non-issue in many instances. In an economic context, food deserts appear in low-income areas of the country, where individuals may be less inclined to buy the healthy options when their dollar stretches further for the unhealthy food that is easier to acquire. This is then one of the reasons that supermarket chains are reluctant to establish themselves in areas of food insecurity. In urban areas, at times there is really no space for them to exist or the space that does exist may not be big enough. In rural areas, there is too little traffic at times to merit their establishment. Food deserts are not solely about the fact that people cannot get the healthy food options that they should have to survive, these deserts also carry social, economic, and cultural implications that paint a broad picture of society at large.

It is important to care about food deserts as they are a greater part of everyone’s life than they are led to believe. Every individual has someone in their lives, be it a close friend or a casual acquittance that at one point or another has struggled due to a lack of healthy food, or because of hunger in general. While it is not always possible to see the struggle that these individuals have in their access to healthy food options, they do exist. In addition, the existence of food deserts is a reflection of the overall health of a community. There are many issues unrelated to food that influence or are influenced by the existence of food deserts, and to solve these issues, such as poverty and low-education, necessitates that we resolve the issue of food deserts as well because they all affect the health, livelihood, and chances of success, of an individual. In Indiana alone, Dutta etal. reports that 13% of Hoosiers experienced food insecurity in 2011 alone, and in Indianapolis, the capital of the state, one in every five inhabitants lives in what is a food desert (Dutta etal., 2015). According to the Food Desert Locator (Gallagher, 2010), an interactive map that was established with the United States Department of Agriculture as part of former First Lady, Michelle Obama’s Let’s move initiative, Tippecanoe County has a high degree of individuals with low income and low access to healthy food options. In addition, we must not only worry about people that live in food deserts, but also people who live in ‘food oases”, locations where stores are located, as well. Just because someone lives close to a grocery store with healthy food items, does not mean that the individual has the money to pay for those healthy foods that are inaccessible in food deserts. Additionally, while people may live close enough to a grocery store to not be considered as living in a food desert, it does not mean that these individuals have a reliable means of transportation with which they may make the trip to the store. Therefore, it is entirely possible for people to still suffer the negative effects of living in a food desert without actually living in one.

There is no quick fix to the problem that is food deserts, and it will take a combination of strategies to mitigate their effects and their existence. One solution, is the establishment of mobile groceries, that bring fresh foods to people, rather than making the people go to the fresh food. This is a solution for both rural and urban settings as it provides people with greater access to healthy food options. Another solution, particularly in urban areas, is the improvement of public transportation, so that the mile or more to the grocery store does not seem as long for people without cars of their own. There is also the possibility of establishing grocery stores in what is considered food deserts, though this strategy at times is not often considered overly effective. In addition, once people gain access to healthy foods, it is a matter of educating them on how to prepare and use healthy foods in the most nutritional way, working towards the improvement of their overall health. There is no simple solution. It will take multiple people working in multiple capacities to solve the issue of food deserts and the implications that come with them, but the United States is slowly making strides towards resolving the issue and improving the livelihood of American citizens. 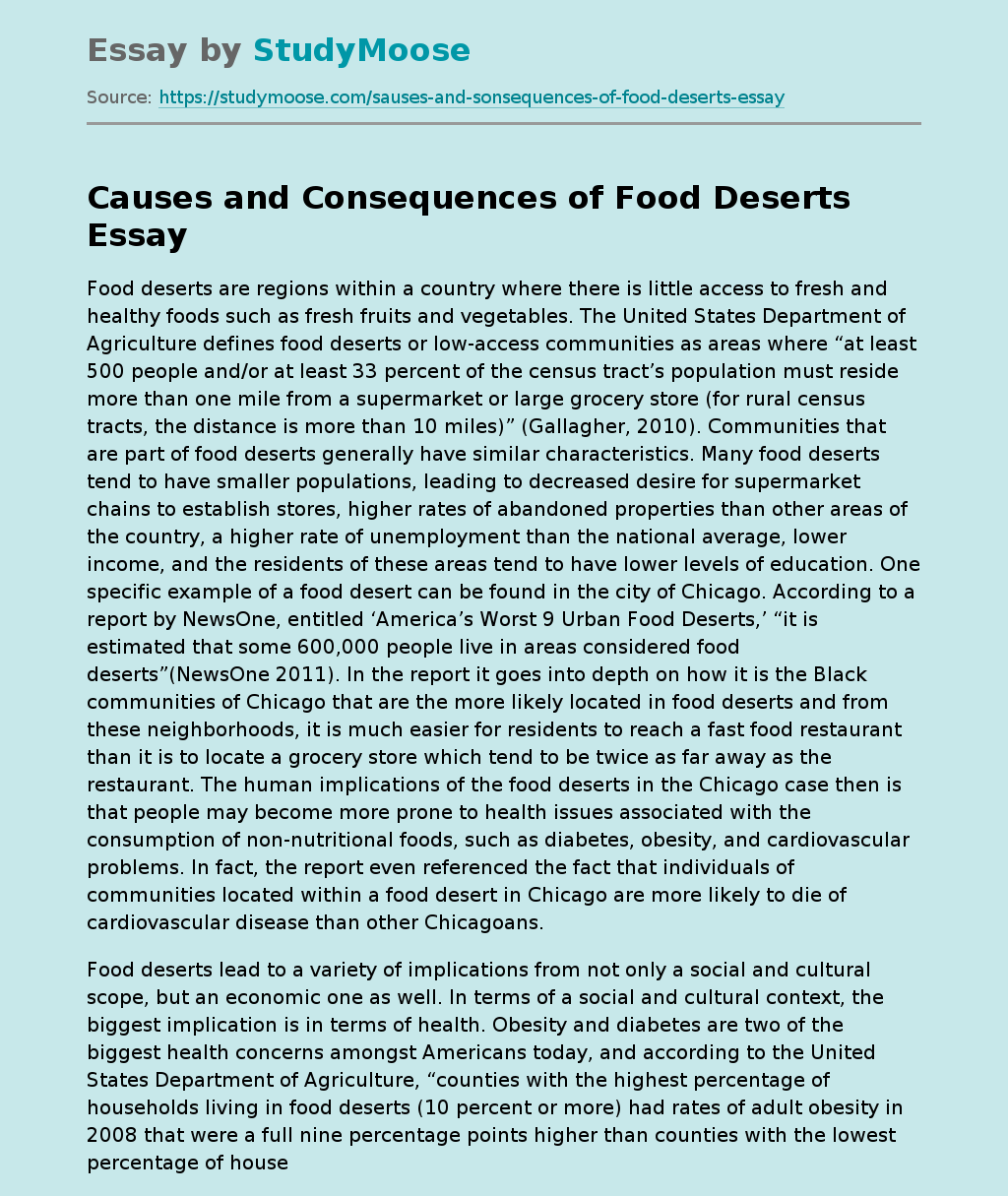