Satirical Elements of Hitchhiker’s Guide to The Galaxy

Ever find yourself wanting something, saving up money to get it and then still feel like your life is insignificant? Have you ever stopped and thought about how governments never take the people into consideration, only what’s best for the society as a whole? Or possibly find yourself thinking about why you voted for a president that tells you one thing to get votes and does the complete opposite when elected? In the exciting science fiction book The Hitchhiker’s Guide to the Galaxy by, Douglas Adams, you encounter many humorous situations in his writings.

Don't use plagiarized sources.
Get Your Custom Essay on Satirical Elements of Hitchhiker’s Guide to The Galaxy Just from $13,9/Page

The third and final satire is about the president of the entire galaxy, and how he holds absolutely no power what so ever. In the book you meet a very normal man who lives a very normal life. The man’s name is Arthur Dent. But what sets Arthur apart from others is some of his very unusual friends. The first of his very unique friends is Ford Prefect, an alien trapped on earth having to live on earth while writing his book the hitchhikers guide to the galaxy. The second is Zaphod Beeblebrox the president of the galaxy, and Arthur’s foe.

Zaphod became Arthur’s foe by stealing a girl he was very into at a party one night on earth. However foe became friend when Zaphod rescued Arthur and Ford from the vacuums of space just before the world was destroyed. The third companion is Trillian the girl that Zaphod stole from Arthur at the party in London. The fourth and final companion is the faithful and loyal robot Marvin. Marvin however is not your typical robot, what sets him apart from others is that he is manically depressed, because he is too smart for the tasks that are asked of him.

That is just where Adams humor starts. The first satirical element Adams portrays in his book is tiny pieces of green paper that were making the people of the planet unhappy. Of course Adams is talking about earth, and how the tiny green pieces of paper, a. k. a money affects people’s lives, and also their happiness. Then he goes on to say that “even the people with money are still not satisfied with what they have, nor do they ever think they have enough of the little green papers”.

Adams example for this in the book says that even people with digital watches (at the time of writing the book must have been a statement of wealth) were not happy with their lives even with them. As you read more of the book you find that not only are humans affected by the little green paper’s power, but also many of the other planets and the beings that inhabit them. The main example for how the money affects the universe is how the planet of Magrathea, once the wealthiest planet in the universe disappeared when the economy collapsed and all the planets worked on their own economic problems.

Although later in the book you come to find out that the people of Magrathea, merely slept through the economic times until they were able to start working again without the penalties of a bad economy. I think that Adams was trying to say that people should worry less about insignificant pieces of paper and focus on the greater things in life. Adams has a talent for bringing problems the world faces in today’s societies to the universe also. Although some of the life forms in the book seem to think of themselves as much greater beings than man, they find themselves in some of the same circumstances as earth faces.

The second satirical element in Adams book takes place when a man wakes up to find bulldozers out in front of his house. He then comes to find out that a bypass is to be built right where his house is. When the man asks about how he was suppose to know about what was going to happen to his house, the man simply says that it was on display at the town hall. But in reality it was in the basement of the town hall where no one could find it. This satire I believe has something to do with how sometimes big companies will do anything to make profit regardless of who it affects.

The same type of satire comes up later on in the book when the earth is destroyed to make room for a hyperspacial express route. Then the aliens say that we should have known this was going to happen, it had been on display in a close solar system. I think the satire is quite the same here as it is for the man’s house. The irony, however, is that humans did not yet acquire space travel that was advanced enough to go to where the papers were on display, even if they were in the basement.

I think another way you could possibly look at both of these satires is simply that people will do anything to better themselves for greed, power or anything else, even if it involves destroying something that is very important to someone else. Later you come to find out that they did not even need to blow up the earth because they found an alternate way of traveling the universe. The third satirical element is about the president of the whole universe, Zaphod Beeblebrox. In the book Adams portrays Zaphod to be this imbecile that has no idea half the time what is going on, let alone how he won the presidency.

One of the lines from the book says that Zaphod is “permanently checked out to lunch”. (back of the book) Some might think that Adams was taking stabs at how people elect such stupid people into positions of power, especially one as important as president of the universe. This could also be viewed in today’s society on how people elect someone for certain personal reasons, only to resent them later after they do not hold true to their promises. This also plays back to how Adams ties real world problems with his satirical universe setting of the book and how it affects the beings that inhabit it.

Although that could not have been his intent he could have also been saying that he was merely a puppet for something bigger, merely a spokesperson for a group of people who were actually running the show. The beings of the universe, mainly the Vogon’s (the bureaucrats of the universe) wouldn’t have this position, and give it absolutely no power unless someone or groups of beings are not benefitting from this position in one way or another. Either way I think he was saying something along those lines, and wants people to see the madness behind it.

Although there are many satirical elements in The Hitchhikers Guide to the Galaxy, whether or not Adams actually meant for the satire to have a higher meaning or not is entirely up to the reader and how they want to interpret his writings. I myself think that Adams did have some higher meaning in mind while writing this book and what went into his satire, and give my opinions in this paper. Whether you choose to consider my opinions or not is up to you. Either way I enjoyed the satire in the book and would definitely read more from Douglas Adams.

Satirical Elements of Hitchhiker’s Guide to The Galaxy. (2017, Mar 08). Retrieved from https://studymoose.com/satirical-elements-of-hitchhikers-guide-to-the-galaxy-essay 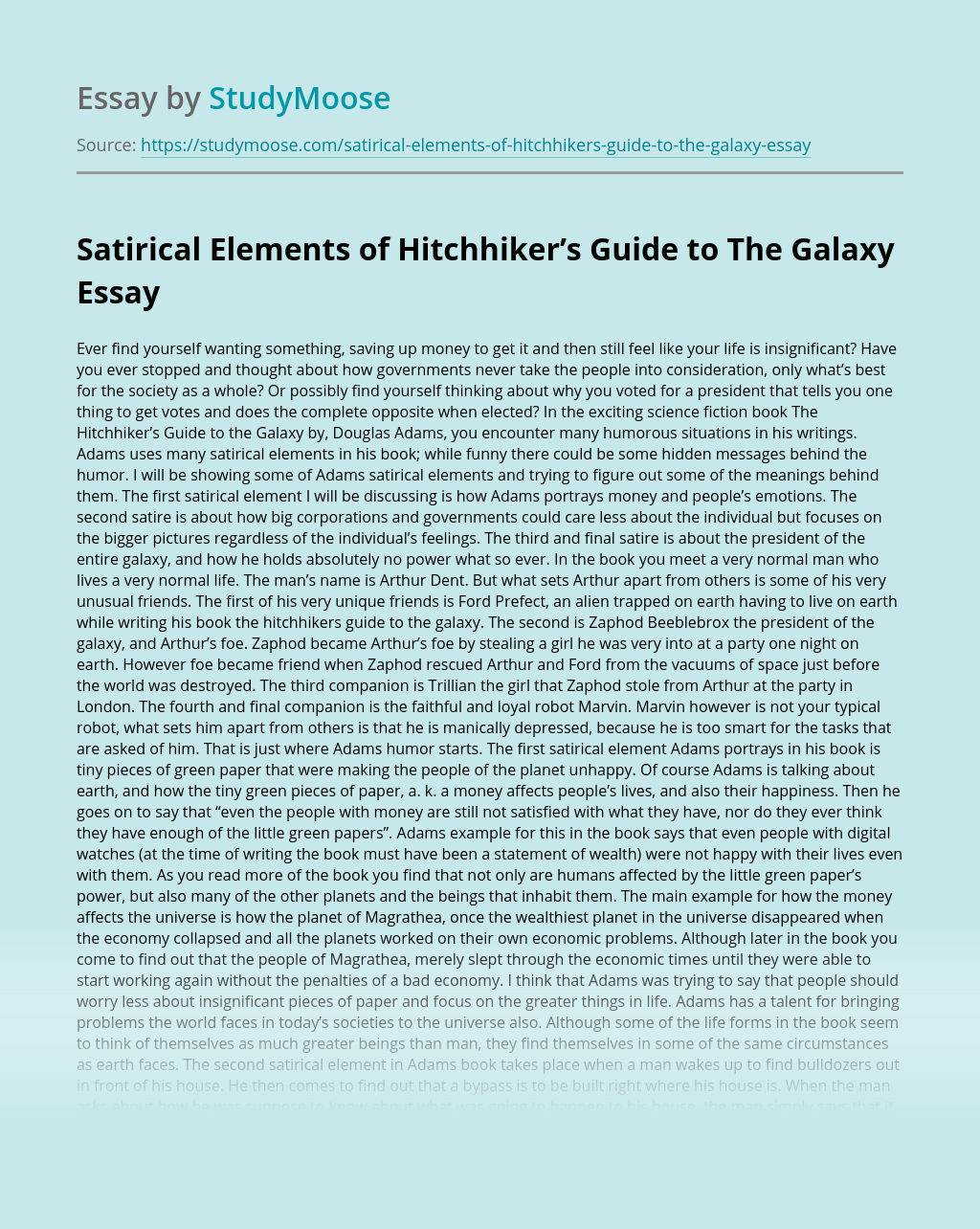 Oprah Winfrey was born in Kosciusko, Mississippi on January 29, 1954. Her name was supposed to be “Orpah” Winfrey, but the name was spelled wrong on her birth certificate, and pretty soon everyone was calling her Oprah. As her mom looked for a job in the North, Oprah lived her grandmother, who taught her to...

View sample
How Can You Change Views About Homeless People?

Oil and gas reservoir protection during the process of drilling, completion and development in oil and gas fields.Introduction:A petroleum reservoir or oil and gas reservoir is a subsurface pool of hydrocarbons contained in porous or fractured rock formations. Petroleum companies extract crude oil from the Earth using a perforation in the Earth’s surface called an...

Everybody likes to watch movies no matter what kind of movie we like. Movies entertain us during our free time such as, in the weekends and holydays, in brief movies are a pastime for all people, but the question is what is better watching it at home or at the theater? Transparently, there are some...