Sartre and Heidegger on Humanism

Jean-Paul Sartre and Martin Heidegger were both philosophers who contributed majorly to the philosophy of existentialism, though both had their own ideas of what it entailed. Both philosophers wrote two famous letters seeking to define what they believed existentialism was, Letter on Humanism by Heidegger and Existentialism is a Humanism by Sartre. In this essay, I will outline Sartre’s account of Humanism in contrast with Heidegger’s accounts of Humanism and accomplishment. I will then offer a comparison between the validity of their critiques and discuss if there are any shortcomings to their arguments.

Don't use plagiarized sources. Get your custom essay on
“ Sartre and Heidegger on Humanism ”
Get custom paper
NEW! smart matching with writer

I will begin by laying out what I believe to be Sartre’s most compelling arguments as a summary of Existentialism is a Humanism. Sartre begins his lecture with a question of why it is that humans credit their “ugliness” to existentialism. For example, they use the term “human nature” as a way of explaining or even excusing inappropriate behavior. He explains that this is due to the two kinds of existentialists.

The Christians and the atheists, which is classifies as himself and Heidegger. The main difference between the two is the reversal of the popular phrase “existence precedes essence.” Sartre explains, “When we think of God as the creator, we are thinking of him, most of the time, as a supernal artisan […] God makes man according to a procedure and a conception, exactly as the artisan manufactures a paper-knife, following a definition and a formula. Thus, each individual man is the realization of a certain conception which dwells in the divine understanding” (“Existentialism”, 1946).

This quote from Sartre’s lecture helps to explain the difference between the two existentialists and why that difference changes societal understanding of human nature. When people think of God as the creator they understand that everything that occurs in human beings was meant to occur that way. If God created humans to act evil then why should humans be held responsible for poor actions? I see this as sort of a deterministic way of thinking, one which Sartre appears to disagree with. He explains that the essence of humans does not precede their existence, rather existence precedes their essence. By this he means that humans do not have any pre-established behaviors of purpose, and even further that we may not even require a purpose. Sartre uses the term “responsibility” in a different way then how I used it above. He proclaims that, “If, however, it is true that existence is prior to essence, man is responsible for what he is. Thus, the first effect of existentialism if that it puts every man in possession of himself as he is, and places the entire responsibility for his existence squarely upon his own shoulders. And, when we say that man is responsible for himself, we do not mean that he is responsible only for his individuality, but that is responsible for all men” (“Existentialism”, 1946).

Sartre explains that it is only you who can decide whether an action is good or bad, but acting on those decisions reflects mankind as a whole. This in turn leads to what he explains as quietism, that people will allow others to do what they cannot do in fear of poorly defining their existence. He rejects that existentialism is a “philosophy of quietism” because it requires that man be defined by his actions.

Heidegger’s Letter on Humanism is a response to what he believes is a misinterpretation of the concept of man, in which he believes humanism is more closely linked to Being rather than to man. Though Heidegger’s letter is primarily concerned with correcting the metaphysics initially linked to humanism, what I will address in the rest of this paper are the specific parts of his letter than are a response to Sartre.

At the very beginning of his letter Heidegger makes a reference to one of the main points in Sartre’s lecture. He states, “We are still far from pondering the essence of action decisively enough. We view action only as causing effect. The actuality of the effect is valued according to its utility” (“Letter”, 239). This statement refers to Sartre’s idea of man being defined by his actions, and actions defining essence. The critique Heidegger is making here is that Sartre credits human essence to our actions when he has not yet determined what the essence of our actions is. Heidegger believes that the essence of action is ‘accomplishment’, in which he defines accomplishment “to unfold something into the fullness of its essence, to lead it forth into this fullness – procedure. Therefore only what already is can be really accomplished. But what “is” above all is being” (“Letter”, 239).

In attempts to break down what this means I will pull apart his argument. Heidegger understands accomplishment as the unfolding of something into its fullness. This means that in order to be accomplished, the thing that requires accomplishing must already be. If the essence of our actions is accomplishment, and our actions determine our essence, then it does not follow, for Heidegger, that existence precedes essence. What I mean by this is that if action, as accomplishment, is what determines our essence then what we are to be already is. And of course, “but, what “is” above all is Being” (“Letter”, 239), which ties back into his metaphysical ideas of what existentialism is and the concept of humanism.

Though I do believe Heidegger makes valid critiques of Sartre, which is not surprising because he would not be so widely read if he didn’t, I find that his arguments are circular. I believe Heidegger may be getting too technical with his interpretation of what Sartre was arguing, and that problems with language are often never-ending problems. I’m not convinced that it was necessary to define the essence of action when most actions are already determined by their utility. I’m also not sure that I see how Being can be unassociated with humans, and precede their existence. Though Heidegger accounts for a concept that Sartre did not I’m not sure how necessary that concept is for existentialism, especially when it is something we may never know. I have found that I have taken interest in Sartre over Heidegger simply because I find his existential concepts are more applicable to society, whether or not what he argues for ought to be applied.

Sartre and Heidegger on Humanism. (2021, Apr 08). Retrieved from http://studymoose.com/sartre-and-heidegger-on-humanism-essay 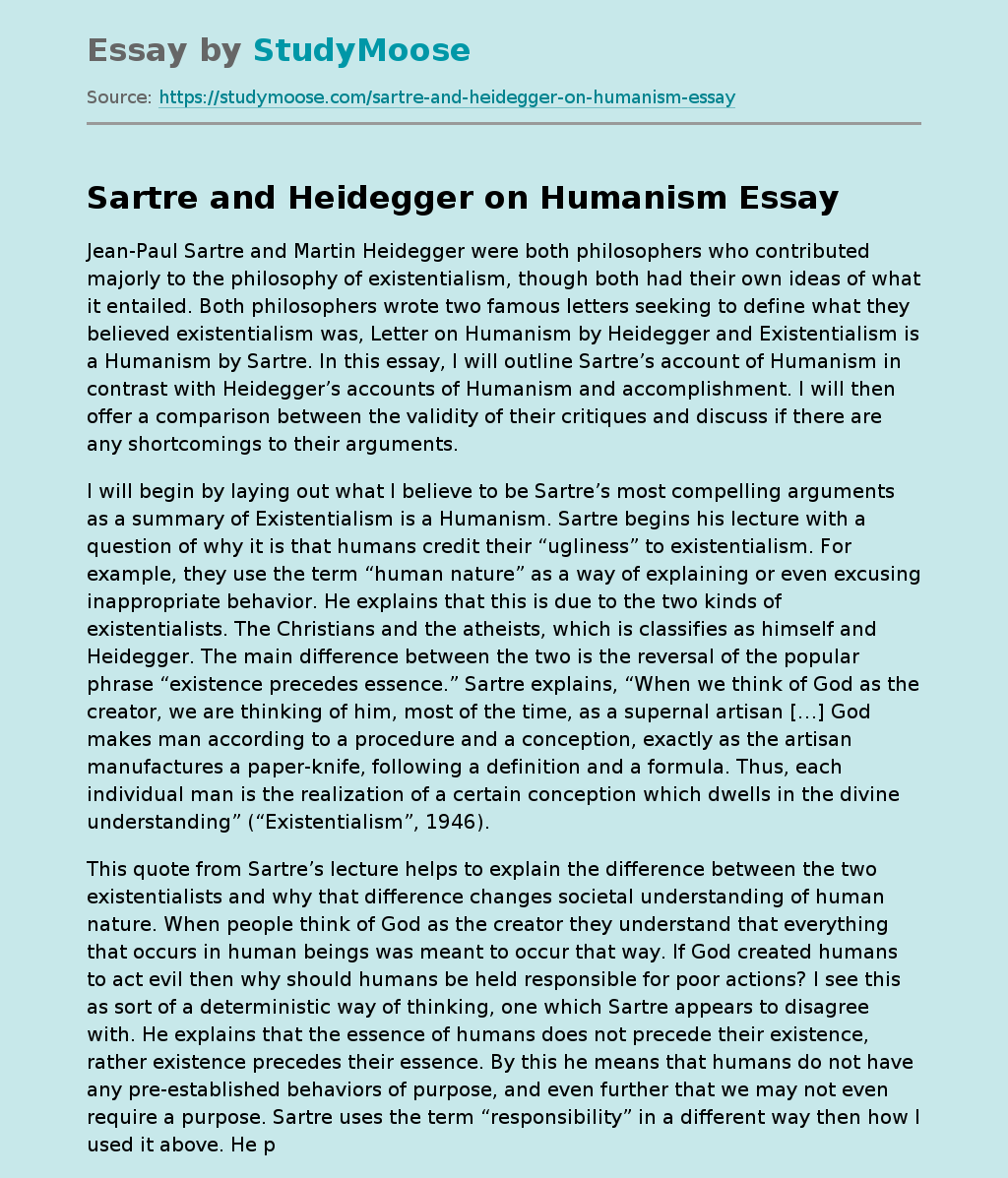