Mexican-American writer Sandra Cisneros is the preeminent Latina writer in the U. S. today. Cisneros has written two novels, a collection of short stories, and three books of poetry. Her earlier works, the short novel The House on Mango Street (1984) and the collection of short stories Woman Hollering Creek and Other Stories (1991), were responsible for establishing her wide readership and winning Cisneros major publishing contracts and major advances on her works. Cisneros is the recipient of many literary and non-literary awards including the very prestigious MacArthur fellowship.

Don't use plagiarized sources. Get your custom essay on
“ Sandra Cisneros: Writer and Activist ”
Get custom paper
NEW! smart matching with writer

Cisneros’ reputation extends beyond the U. S. Her works have been translated into over 15 languages making her an internationally renowned author. Along with being a writer, Cisneros is also an activist. Her activism is a fundamental part of who she is as a person, and it is focused mainly in three areas. She is actively engaged through her public writings and public appearances with issues that have to do with the education, or lack thereof, of Latinos, particularly Mexican Americans.

Proficient in: The House On Mango Street

Again, through her public wirings and appearances, she is actively engaged in the politics of how Latinos, particularly Mexican-Americans, are represented or not represented in society, politics, and the media. Cisneros actively promotes literature and literary culture through the two foundations she established and which she funds and through her unfailing participation in various community literary activates. She also actively promotes Mexican-American culture and history by her participation in a variety of related cultural events, many of which she organizes herself.

Even with all Cisneros has achieved she has not stopped.

Still actively involved in her foundations, and making appearances and speeches. Cisneros remains President of the Macondo Foundation and the Alfredo Cisneros Del Moral Foundation. In addition Cisneros is Writer-in- Residence at Our Lady of the Lake University in San Antonio. She is also still writing. Currently Cisneros is in the process of writing a collection of fiction titled Infinito, a children’s book, Bravo, Bruno and a book about writing she calls Writing in My Pajamas. 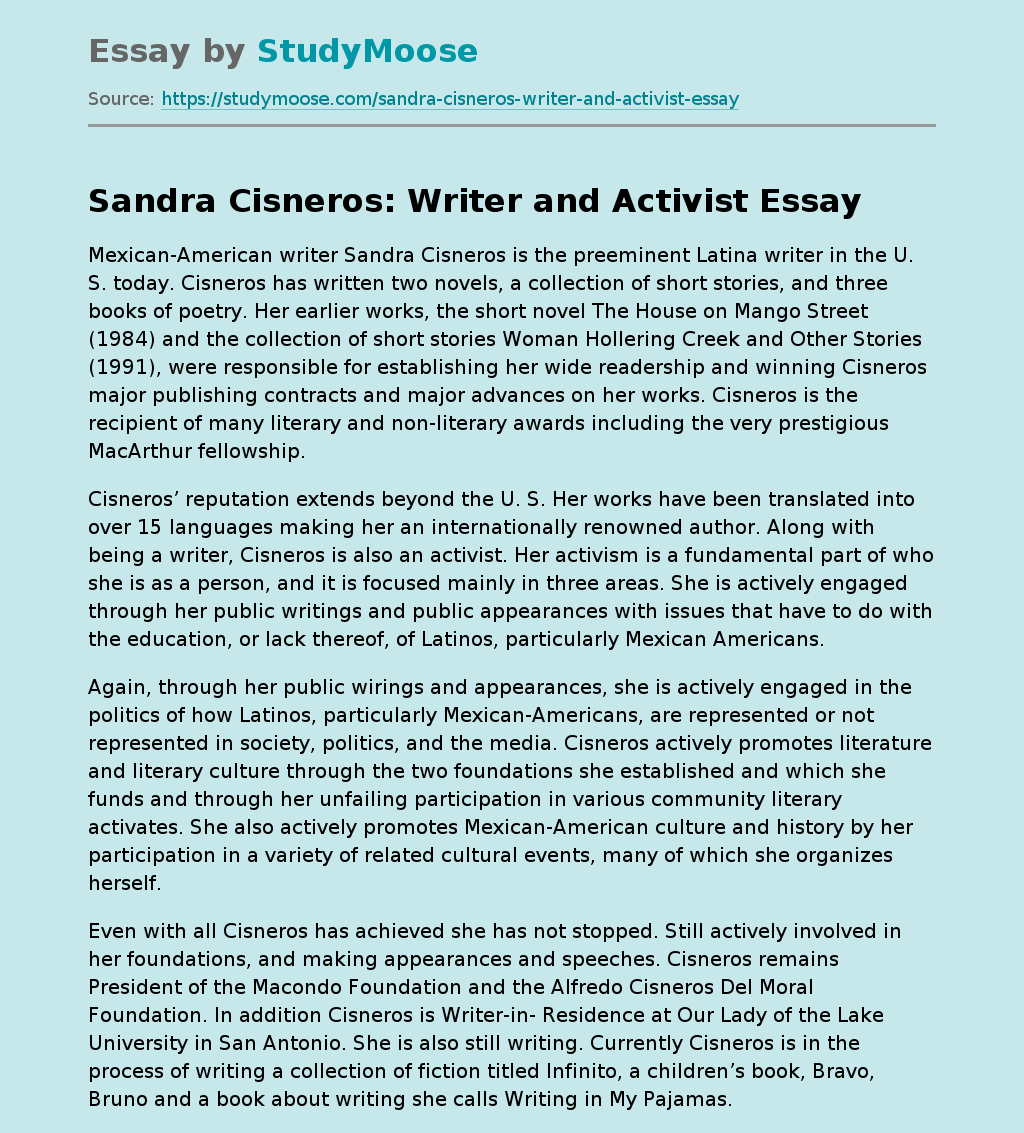