Analysis of "Eleven" by Cisneros

Poet Maya Angelo aptly stated, “I am convinced that most people do not grow up… We carry accumulation of years in our bodies, and on our faces, but generally our real selves, the children inside, are innocent and shy as magnolias. ” Similarly, Sandra Cisneros’s “Eleven” illuminates the enigmatic journey of growing up through the sagacious eyes of an eleven year old child. As the speaker of this work asserts, the aging process does not eradicate a person’s previous self.

Don't use plagiarized sources. Get your custom essay on
“ Analysis of “Eleven” by Cisneros ”
Get custom paper
NEW! smart matching with writer

Instead, it accumulates layers of one’s former years and creates a realistic portrait of one’s complete existence.

Cisneros’s work illustrates mankind’s maddening, internal struggle as it ages in this manner. When life demands maturity, one inadvertently becomes the sobbing three year old, the introverted adolescent, or the awkward teen of one’s past. The speaker of this literary work, Rachel, embodies this frustrating process of growing up. Undoubtedly, Cisneros employs similes, repetition, and imagery as well as symbols and diction to characterize Rachel as she matures.

The similes, repetition, and imagery utilized throughout “Eleven” vividly portray the speaker.

For example, Cisneros illuminates Rachel’s development with the following comparisons: “Growing old is kind of like an onion or like the rings inside a tree trunk or like my little wooden dolls that fit one inside the other. ” This illustrates the way in which each of Rachel’s years develops atop the prior one. As a result, she remains the quiet four year old who cannot express that the sweater does not belong to her and the three year-old who desperately wants to release a flood of tears as she is forced to wear the horrid red garment.

Additionally, Cisneros characterizes Rachel as a child “with only eleven years rattling inside [her] like pennies in a Band-Aid box. ” The randomness and disorder of loose change as it jiggles in its container mirrors Rachel’s internal turmoil. Each of the speaker’s eleven years metaphorically clatter inside her mind and struggle to become the master of her actions. Furthermore, the repetition of critical phrases contributes to Rachel’s characterization. Cisneros restates the numbers, “ten, nine, eight, seven, six, five, four, three, two, and one….

”, to reiterate the concept that all of Rachel’s previous ten years remain a part of her. Interestingly, counting backwards from ten, a common juvenile chant, successfully demonstrates Rachel’s childlike character. Additionally, the repetition of the phrase “today I am eleven” reveals Rachel’s vehement desire to suppress the previous years of her youth which embody a maddening immaturity. However, the speaker’s resolute, repetitive assertion that she is eleven highlights Rachel’s struggle to remind herself that she is transitioning into her eleventh year.

Thus, her apparently juvenile behavior illustrates that Rachel is a culmination of each of her prior years. In addition, the repetition of the phrase “not mine” further illuminates Rachel’s inner toddler years. Finally, Cisneros use of imagery vividly depicts Rachel. For example, she describes her with the following vibrant lines: “My face all hot and spit coming out of my mouth because I can’t stop making those little animal noises, my whole head hurts like when you drink milk too fast. ” This creates the portrait of the teary-eyed, red-faced Rachel and connects to the reader’s senses of touch, sight, taste, and hearing.

Hence, literary devices masterfully demonstrate Rachel’s character throughout “Eleven. ” Moreover, Cisneros employs symbols and diction to aptly characterize Rachel. First, the red sweater serves as a crucial symbol in this work of prose. Essentially, this contemptible garment embodies the previous years that remain within Rachel. Cisneros writes the following description of this repulsive sweater: “It’s an ugly sweater…with the collar and sleeves all stretched out like you could use it as a jump-rope.

” In addition, the speaker cringes as she places one arm “through one sleeve of the sweater that smells like cottage cheese. ” As Rachel glares at this symbolic garb, its sleeves evidently illustrate the eight or nine year old child within her who enjoyed the puerile pastime of jumping rope. Additionally, the cottage cheese stench of this garment is reminiscent of the peculiar scents that a younger child may often carry. Furthermore, as she shoves the sweater to the “tippy-tip corner” of her desk, it hangs “over the edge like a waterfall.

” As this expression demonstrates, Rachel’s emotions spill from her just as the significant red garment tumbles from the desk. Moreover, the age of eleven is a symbolic element throughout the author’s short story. This age is typically regarded as a frustrating period positioned between the adolescent and teen years. Similarly, Rachel remains trapped between the maturity of her eleventh year and the juvenility of her previous self. For example, Rachel’s eleven year old mind recognizes the blatant injustice of Mrs. Price’s actions who forces her to accept the

contemptible red sweater. However, as Rachel opens her mouth, her four year old self stutters an ineffective denial. In addition, the diction of this work contributes to the author’s portrayal of Rachel. Cisneros writes in the simple speech of a young girl. For instance, Rachel utilizes run-on sentences and childlike phrases such as “not mine,” “tippy-tip,” “all itchy,” and “that stupid Phyllis Lopez. ” This deliberate style reminds the reader that Rachel is a little girl despite her wish to be “one hundred and two.

” Also, “one hundred and two” exhibits typical childish exaggeration. Additionally, the author’s diction allows readers to experience thisgh situation from the perspective of an eleven year old. For instance, Cisneros describes Rachel’s indignation with the following lines: “That stupid Phyllis Lopez, who is even dumber than Sylvia Saldivar, says she remembers the red sweater is hers. I take it off right away and give it to her, only Mrs. Price pretends like everything’s okay. ” This amplification of the incident allows readers to grasp the traumatic impact of this event on Rachel.

Therefore, the symbols and diction of “Eleven” aptly depict Rachel’s character. Unquestionably, literary devices such as similes, repetition, imagery, symbols, and diction deftly contribute to the characterization of Rachel. Cisneros draws an enlightening parallel between development and the formation of layers within an onion or tree. Additionally, the repetition of childlike phrases such as “not mine” demonstrates that each of Rachel’s prior years remains within her as she matures.

Also, the brilliant imagery of this literary work solidifies the reader’s visualization of Rachel. Moreover, the symbolic red sweater as well as the age of eleven further corroborates this central message. Finally, the puerile diction of this writing masterfully allows readers to comprehend the conflict that Rachel experiences in the tween year of eleven. Certainly, Cisneros effectively illustrates Rachel’s disillusionment as she realizes that she can neither make her voice be heard nor silence her childlike instincts at age eleven.

Analysis of "Eleven" by Cisneros. (2016, Jul 27). Retrieved from https://studymoose.com/analysis-of-eleven-by-cisneros-essay 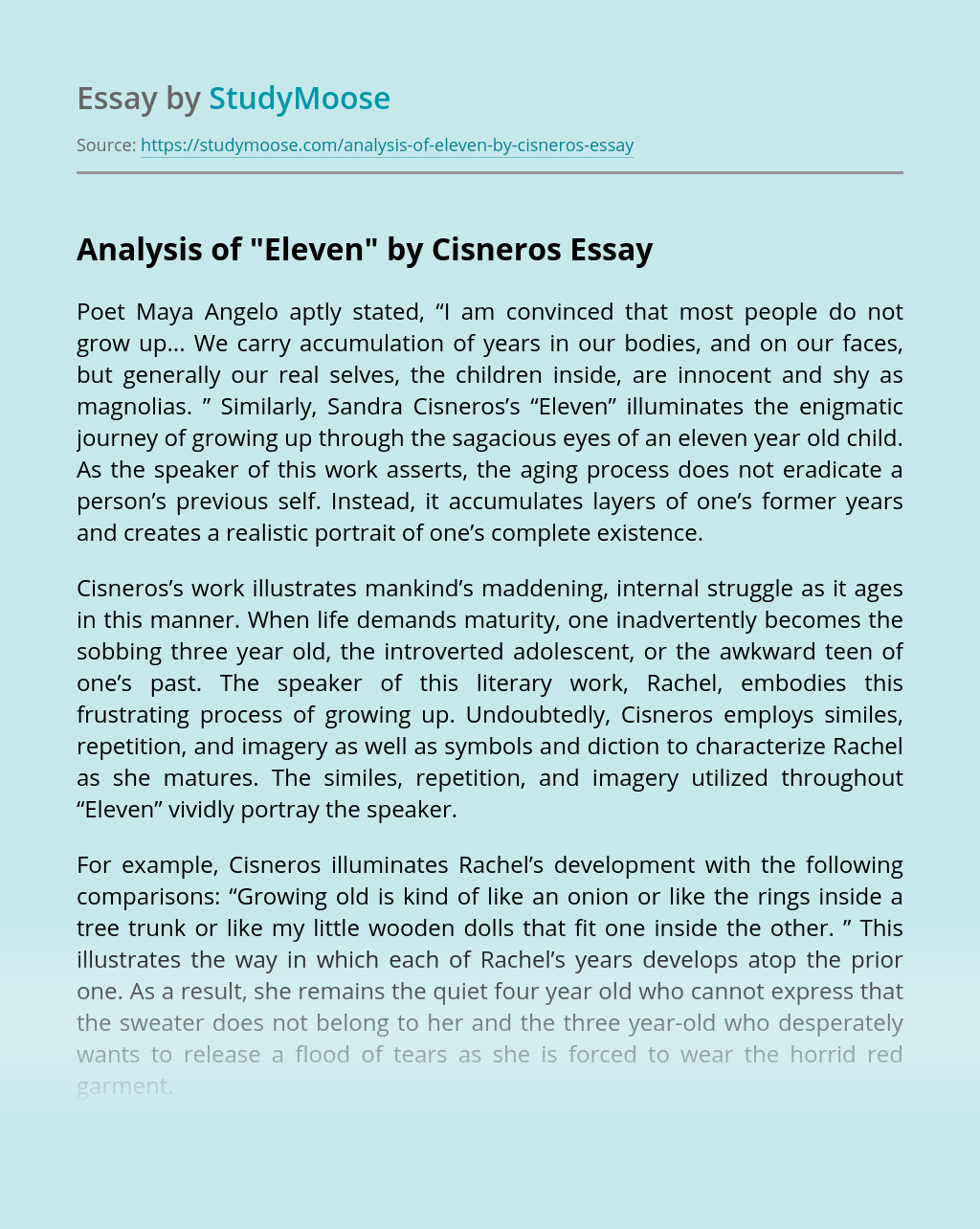