According to Abel (1989), sadistic rapists have a tendency to be sexually aroused by fantasies and urges of forcing themselves sexually on their victims. Sexual sadists are turned on by unnecessary brutality, but the skilled rapist will use more power than necessary in order for the victim to obey what is being asked of them. With a sadistic rapist, rape is taken to a whole new level. It is already horrific for a person to be raped, but to have to deal with extra pain, humiliation, and torture is just unreal.

Don't use plagiarized sources.
Get Your Custom Essay on Sadistic Rapist Just from $13,9/Page

This paper will go into the minds of sadistic rapists to try and understand where all of this anger and aggression comes from anyway, and why they feel the need to harm others. Some criminals use their upbringing as an excuse to their mayhem. No matter how criminals were raised growing up, it doesn’t give them the right to destroy someone else’s life. The whole point is everyone knows right from wrong.

Background: Sadism The term sadism came from a French author who was born 1740, and died in1814.

Either way this crime is looked at, it still is a horrible and humiliating act for the victim. “Rape is a huge social dilemma that is very overwhelming to victims, their families, and eventually the general public all together. In general, rape means to have sex with a person that does not give him or her permission or, when the victim decides to consent with the offender, it is done out of pure fear and the victim is pretty much left with no choice but to comply with the offender. ( Pardue & Arrigo, 2008).

When you look at a crime such as rape, it is something that the victim will never forget and will carry around with them for the rest of their lives. It does not matter if the rape is sadistic or not sadistic; either way the end results for the victim is still the same. If the offender chooses not to kill his victim, a part of the victim probably wishes that the offender did kill them so he or she wouldn’t have to deal with the aftermath of the rape. The worst thing for the victim is having to relive what happened to them over and over again.

Some victims recover from being rape, but there is still a big percentage that never recovers from this horrible crime. According to the U. S. Bureau of the Census (1992), in 1990, there were 102,555 forcible rapes in the United States, an increase of 9 percent from 1989 and comprising 6 percent of the total violent crimes. It is estimated that between 15 to 25 percent of women are victims of a completed rape at some point in their lives. However, only a fraction of sexual assaults comes to the notice of police or health services. 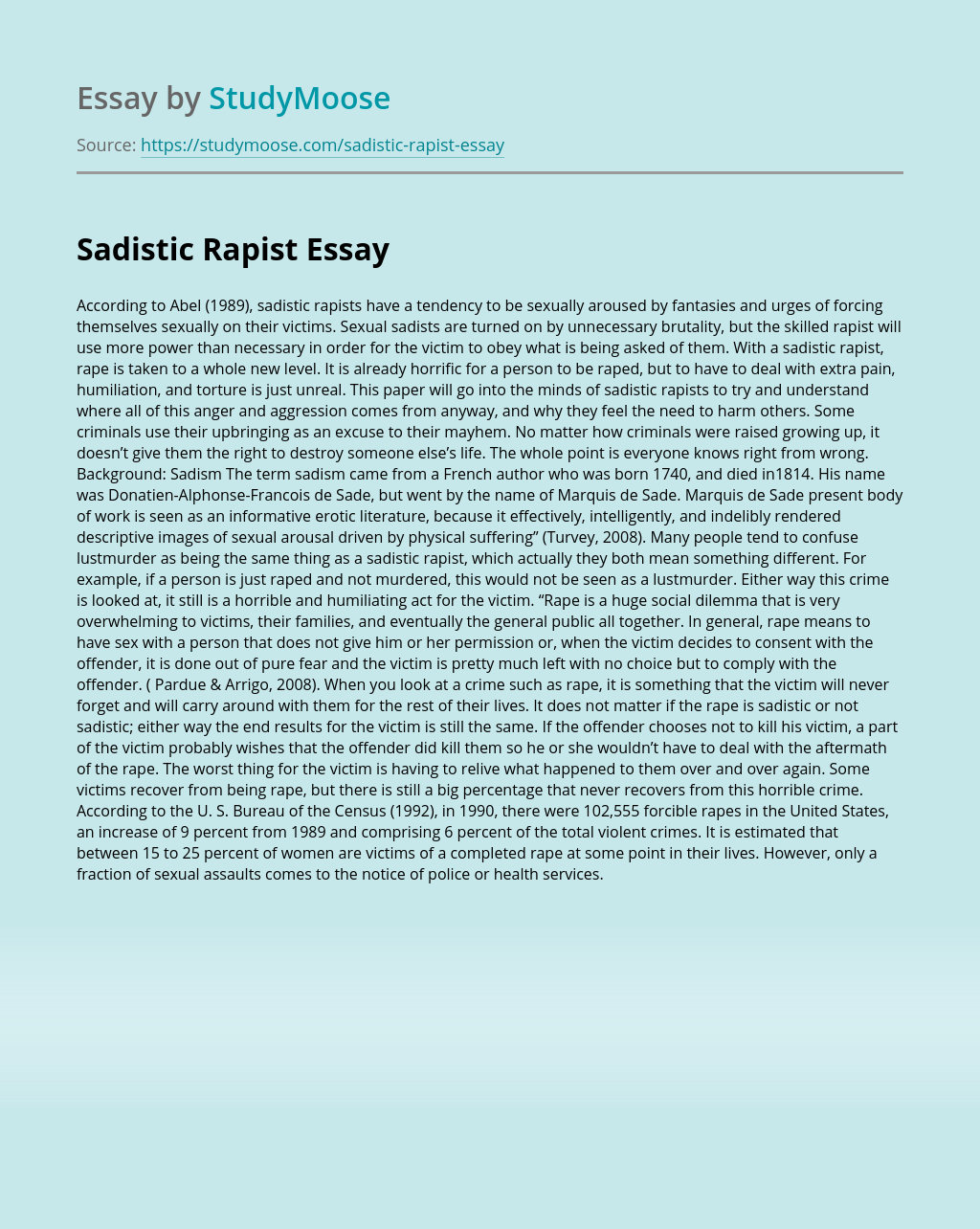 Wrongfully Accused Anyone who has been wrongfully accused of doing something they know they did not do will understand the immense frustration that comes with it. Fortunately for most people, that boils down to someone saying they took the last donut or let slip a bit of gas. Unfortunately for others, it involves horrible crimes... VIEW ESSAY

According to Abel (1989), sadistic rapists have a tendency to be sexually aroused by fantasies and urges of forcing themselves sexually on their victims. Sexual sadists are turned on by unnecessary brutality, but the skilled rapist will use more power than necessary in order for the victim to obey what is being asked of them.... VIEW ESSAY

Statutory rape is defined as sexual intercourse with a minor. The laws concerning statutory rape were established because it was considered foolish to have sex or perform any sexual acts without being married. It acted as a chastity belt protecting the virtue of young women. These laws depicted men as the habitual guilty party. This... VIEW ESSAY

I. STATEMENT OF THE PROBLEM Sexual abuse of children is a harsh fact of life in our society. Child sexual abuse is a form of child abuse in which an adult or older adolescents uses a child for sexual stimulation. Forms of child sexual abuse includes asking or pressuring a child to engage in sexual... VIEW ESSAY