Why are people such selfish creatures? Is it because all they want out of life is to get a level higher in life than the rest? Or is it just apart of their genetic makeover? Whatever the reason, humans are the most selfish creatures on our planet. They are the only species on the face of this planet who choose what they want out of life. Some may say that choice is a good thing, but is choice not a catalyst in the process of becoming selfish? All of the other species in the world do not get to choose what they want to be or do in their lives.

Don't use plagiarized sources. Get your custom essay on
“ Romeo and Juliet VS “Romeo and Juliet in Bosnia” on Human Nature ”
Get custom paper
NEW! smart matching with writer

They go along with the cycle of life and take everything as it is. Humans, on the other hand are always trying to change the process of life. In Romeo and Juliet, and “Romeo and Juliet in Bosnia”, we learn that human beings are selfish creatures, who only think about their own well being without considering the consequences, which is reflected in the contrast between Shakespeare’s and Herbert’s perspective towards reckless love and the similarities between the egotistical actions of Admira and Juliet.

Although some people may argue that these texts show us the compassion that humans have since birth through Herbert’s viewpoint of the two lover’s death, we can actually see that the texts teach us about human selfishness since Shakespeare wrote this play for money, which represents his own selfishness.

Romeo and Juliet’s recklessness and selfishness to spend the rest of their lives together causes them to ask Friar Laurence to marry them. Friar Laurence allows this marriage to occur, but only because he believes that it will help reconcile the feuding families. Romeo and Juliet do not even let the thought cross their minds. They only want to be together for love. We can see that William Shakespeare opposes this selfish and reckless love when Friar Laurence scolds Romeo after he has been exiled. Friar Laurence says

They fault our law calls death, but the kind Prince,

Taking they part, hath rushed aside the law,

And turned that black word “death” to “banishment”.

after Romeo complains about the punishment, saying that he would rather die than be separated from Juliet, Romeo even attempts to commit suicide. This represents selfishness because Romeo does not believe that he is lucky to be alive. He does not believe that the Prince has done him a favor, all he can think about is his love towards Juliet and how the two of them can stay together forever and always, instead of thinking about the consequences if they ever succeeded in their romance.

In “Romeo and Juliet in Bosnia”, Bob Herbert is not opposing the selfish and reckless love of Bosko and Admira, because he thinks that their love symbolizes hope, but their death can then be used to motivate the readers to show sympathy to these two young lovers. However, from Shakespeare’s point of view Bosko and Admira’s love are not that different from Romeo and Juliet’s, since they too love each other recklessly and show selfishness by wanting to be together, even though they know about the consequences. Shakespeare might also say that the two lovers are lucky enough to be alive in such a war stricken city, but that’s not enough for the two lovers, they want to run off together across “a bridge over the Miljacka River in a no-man’s land between the Serb and Muslim lines” (Herbert, 921). Therefore, the contrast between Shakespeare and Herbert’s perspectives shows us that the two texts educate us about human’s being selfish creatures.

Admira and Juliet are similar in many ways, one of the ways in which they are similar is that they both perform egotistical actions throughout their lives. They both accomplish these tasks because of selfish and reckless love. Juliet loves her nurse like a mother ever since she has been an infant, and trusts her more than anyone else in her life. Juliet’s opinion changed rapidly once her nurse suggested that she should marry the count for she thinks that Juliet would be “happy in this second match, for it excels [Juliet’s] first. Or if not, [her] first is dead” (Shakespeare, 873). Juliet is so stunned by this reply that she says “Speak’st thou this from thy heart?” (Shakespeare, 873). The nurse replies saying “Ay, and from my soul, or else beshrew them both” (Shakespeare, 873).

Juliet replies with an “Amen” (Shakespeare, 873), which represents Juliet’s disapproval of the nurse’s words. Juliet disapproves of her nurse’s words so much that she secretly wants her nurse’s soul and heart to be ‘beshrewed’. This shows us that Juliet is so recklessly in love with Romeo that she has pushed away any obstacles, even the people closest to her, to return to her Romeo. Juliet’s reckless love for Romeo has turned her into an extremely self-centered young lady. Admira has done something similar, but not as selfish as Juliet. Admira’s grandmother, Sadika Ismic, reports that she was not very happy about Admira’s boyfriend, who was a Serb. Her grandmother is against it, yet Admira continues to date Bosko, knowing that her beloved grandmother opposes their relationship. This represents selfishness because Admira ignores her grandmother’s opinions and continues to do what her grandmother has very good reasons to oppose. These two young ladies are both selfish creatures who would choose a boy they fell in love with at first sight over a person as close as family.

These two texts represent selfishness. However, some people may argue that they actually show compassion, because of Bob Herbert’s hidden message. Bob Herbert ends his pessimistic article with an extremely painful message to read “The world stands helpless and sometimes depressed before the madness. Millions upon millions dead, millions more to die. It is not just the curse of our times. It seems to be the curse of all time” (Herbert, 922). This line may seem cruel and sadistic, but actually Bob Herbert is allowing us to see the truth behind his cruel words. He is trying to send us the message that he feels compassion for this country under war, and the deaths of the two lovers is just another point he uses to emphasize the fact that all humans should take a stand and help those people in need, as well as to be compassionate. Herbert also wants to educate us about the lives of those less fortunate than us.

Therefore, these texts do not show us that humans are selfish and reckless creatures. It actually shows us that humans can be compassionate and that one sympathetic person can make others feel empathy, as well. However, we can actually see that the texts represent selfishness in humans through the selfishness of the author of Romeo and Juliet. In Romeo and Juliet, the play ends with the Prince saying “For never was heard a story or more woe than this of Juliet and her Romeo” (Shakespeare, 910). Shakespeare’s play ends optimistically, after the two star-crossed lovers die the feuding families reconcile and everyone is happy, even though it took the deaths of two loved ones to allow the families to realize that their struggle with each other was superfluous. However, this is not necessarily an act of compassion. Romeo and Juliet is fiction, it was written for entertainment purposes.

William Shakespeare made the ending less tragical to put food onto the table, not because he actually believes that humans are that compassionate in real life. If Shakespeare was writing a true play, with the sad and depressing ending, it would still be considered entertainment, but no one would pay money to watch it. Humans want to believe that there is that little bit of hope and magic still left in the world, which is why they pay hard earned money on “feel good” plays, so they can imagine themselves in that world for a few hours. Therefore, the entire play of Romeo and Juliet actually represents Shakespeare’s own personal selfishness to earn money (Ghose, 2006), because he knew what the audience wanted to watch. He knew that they would not want to watch an extremely true and miserable play, since it would remind them about how terrible life really is. Hence, he made it more fairytale like instead of telling the cold hard truth, which is known as human nature.

In conclusion, Romeo and Juliet and “Romeo and Juliet in Bosnia” both clearly represent the idea that human beings are reckless and selfish creatures through the Shakespeare’s and Herbert’s different viewpoints towards reckless love and the resemblance between the narcissistic actions of Admira and Juliet. Although some people may disagree and argue that these texts show us the compassion that humans have since birth through Herbert’s opinion of the two lover’s death, we can actually see that the texts teach us about human selfishness since Shakespeare wrote this play for money, which represents his own egotism. Selfishness is an extremely broad topic, which is why it can be found everywhere, especially in texts, such as Shakespeare. Shakespeare is famous for writing plays which are strongly connected to human nature, so strong in fact that they seem as though they could actually occur in real life.

This type of writing persuades the reader to continue reading the text. This technique of writing is still used by 21st century authors. The ideas in Romeo and Juliet and “Romeo and Juliet in Bosnia” can be seen in human existence, when you compare humans to other species. One example of human selfishness is the fact that humans are the only species who want to or tries to live longer than they are suppose to live, while all of the other species welcome death as if it were a long lost friend. The consequence to these ‘elixirs of life’ is population growth. Population growth affects all of us in many ways. One of these ways is the lack of food in the world, because if people do not eventually die out, there will not be enough food to feed all of us. Therefore, human selfishness can actually cause the human race to become extinct. This is how severe the consequences of selfishness are, but there is still hope for us. There is time for us to change even though it seems impossible at the moment. We are capable of changing our selfish ways of life. 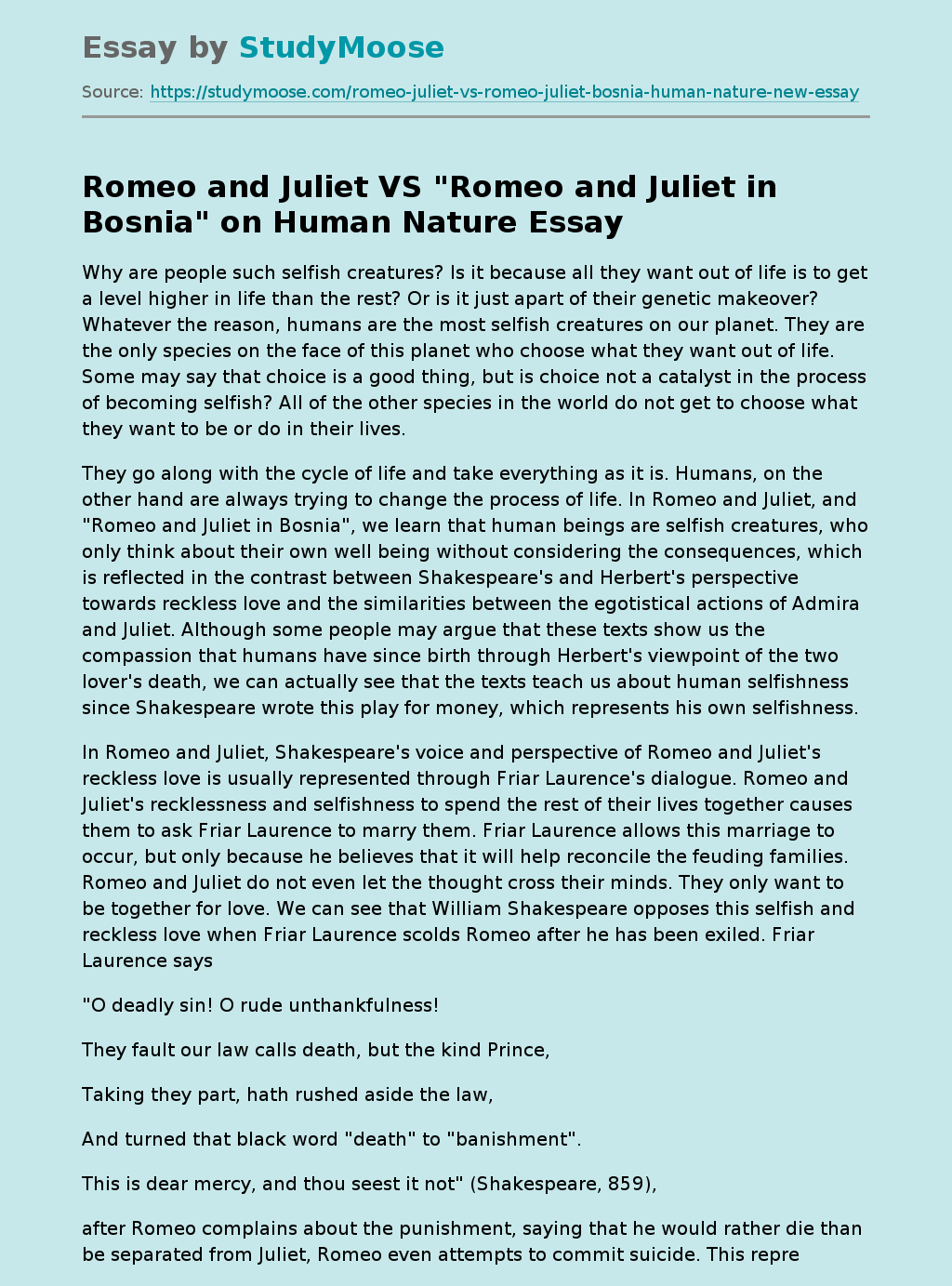