"Romeo and Juliet" - The balcony Scene

Act II, scene ii of Romeo and Juliet is commonly known as the “balcony scene,” and although this designation may be inaccurate (Shakespeare’s stage directions call for Juliet to appear at a “window,” not on a balcony), this scene has been quoted from, played, and misplayed more than any other in all of the Bard’s works. It is proceeded by some astoundingly beautiful verse in Mercutio’s “Queen Mab” speech of Act I, scene iv., and by the individual and joint speeches of Romeo and Juliet at the banquet which concludes the first act and includes a wonderful exchange in which the lovers author a sonnet together.

Don't use plagiarized sources.
Get Your Custom Essay on “Romeo and Juliet” – The balcony Scene Just from $13,9/Page

But the balcony scene rises even above these brilliant flashes and is indelibly etched in our memories. Here Shakespeare’s genius is evident even at a relatively early stage in his career, and while the characters of Romeo and Juliet predominate, the playwright employs certain key dramatic devices and stage techniques that amplify the scene’s impression.

There is, to begin, a deliberate heightening of dramatic suspense immediately before Romeo enters into Juliet’s orchard. Before the beginning of Act II proper, Shakespeare inserts a second appearance by the Chorus (II, chorus 2, ll.1-14). Taking the same sonnet form as the play’s Prologue, this speech is meant to heighten the narrative tension, suggesting, that Romeo, “being held a foe,” may not have access to his Juliet. The dissonance is intensified still further when a lone Romeo asks aloud “Can I go forward when my heart is here?” (II, I, l.1). When Mercutio and Benvolio enter just as Romeo withdraws, there is a mild sense of pursuit that lends even greater urgency to the moment. But the search for Romeo is broken off, with Romeo then emerging in Act II, scene ii to mark a line between the outside world and the lovers’ world at hand by having the last word in the discourse of his friends, He jests at scars that never felt a wound” (II, ii, l.1).

The second line of the balcony scene stands in sharp relief to the first. Romeo “But soft, what light through yonder window breaks?” (l.2), Romeo proclaims and not only does the level of diction now rise to the formally poetic, unlike the first line, Romeo is not simply inserting his own wit but describing to the audience the impression that Juliet makes upon him. Romeo now becomes a guide to the spectator. He sees Juliet in profile and remarks, “She speaks but she says nothing, what of that?” (l.12). The questioned asked is addressed to both Romeo himself and to us, the sympathetic spectator, so that we share directly in Romeo’s joy to find “She speaks!” (l.25).

Unaware of Romeo’s presence below, Juliet utters the famous lines: “O Romeo, Romeo, wherefore art thou Romeo?/Deny thy father and refuse they name/Or, if thou wilt not, be but sworn my love/And I’ll no longer be a Capulet.” (ll.33-36). Romeo addresses an anonymous (but sympathetic) spectator, Juliet addresses a known (but absent) Romeo. When he continues his role as a guide, saying in a stage aside that he wants to hear Juliet speak more, she fulfills his wish (and that of the audience he guides) by elaborating on the what’s in a name theme and saying that a rose “by any other word would smell as sweet” (l.44).

Romeo now sheds his attachment to the spectator and is immersed in poetic discourse with his beloved. In what follows, virtually all of the play’s main figurative strands—references to brilliant light, to planetary bodies, to birds singing at night and the like—surface in exquisitely wrought verse. Romeo comes forward from the shadows in response to Juliet’s call that he “doff” his name and is “new baptized,” the rebirth going beyond Juliet’s suit and allowing Romeo to develop into a new man, shedding the pretentious, self-absorbed persona that he has displayed in the first Act. Juliet is playful with this newborn Romeo, asking him “what are thou?” (after she has presumably recognized him as the youth she saw hours ago and has openly pined for since), more as an opportunity for Romeo to wax poetic than as actual inquiry.

A fine equilibrium is achieved between the lovers when Juliet is given an extended speech (ll.85-107) that balances nearly with Romeo’s opening “But soft” monologue. The balance here is dynamic, as they come together against centripetal forces. She first asks Romeo to affirm that he shares her love for him, but then draws back and speaks of false lovers. She moves forward once more, in offering to alter her behavior to his sense of decorum, but when Romeo swears by the “inconstant moon,” she again withholds full union by asking him to not swear at all, or by they self, “the god of my idolatry” (l.113).

Just as he begins to swear as she commands, Juliet interrupts again, asking him not to swear and saying that she has no joy in their romance because it is “too rash, too unadvis’d, too sudden.” She then bids him an adieu, Romeo says that he will leave him, and this provokes Juliet to ask, “What’s satisfaction can’st thou have tonight?” (l.126). What Romeo wants is an exchange of vows to seal their union, but again, the playful Juliet first speaks about withdrawing the vow that Romeo had already heard.

This finely orchestrated verbal pattern of promising approach and soft withdraw between the lovers is animated in Juliet’s physical movements in the last portion of the scene and, at the same time, in a recapitulation of the mutual sonnet writing process of the banquet meeting in Act I. There is a dimension of ballet in the balcony scene, as Juliet is called in by the nurse, comes back on stage, and then repeats the action. The structure of Structure of II, ii, ll.(142-157), is, in fact, that of another sonnet broken and misshapen by the Nurse’s interjections, but Juliet leaves before the final rhyming couplet is spoken by Romeo as “Love goes toward love, as schoolboys from their books/But love from love, toward school with heavy looks” (ll.156-157). This is unsatisfactory, and so Juliet appears for a third time, with a decidedly non-poetic “Hist, Romeo, hist!” and wishing for a falconer’s voice.

Having little else of substance to say, Juliet asks about time tomorrow when shall send for Romeo, and then offers the alternative couplet: “Good night, good night! Parting is such sweet sorrow/That I shall say good night till it be morrow” (ll.184-185). When she departs, Romeo now alone concludes scene with two rhymed couplets: Sleep dwell upon they eyes, peace in thy breast!/Would I were sleep and peace, so sweet to rest!/Hence will I to my ghostly (sire’s) close cell,/His help to crave, and my dear hap to tell” (ll.186-189). Thus, in addition to the natural sympathy that Romeo and Juliet evoke and to the beauty of the language they exchange, Shakespeare employs a number of technical, even experimental devices to increase the power of the balcony scene.

“Romeo and Juliet” – The balcony Scene. (2016, Jun 19). Retrieved from https://studymoose.com/romeo-and-juliet-the-balcony-scene-essay 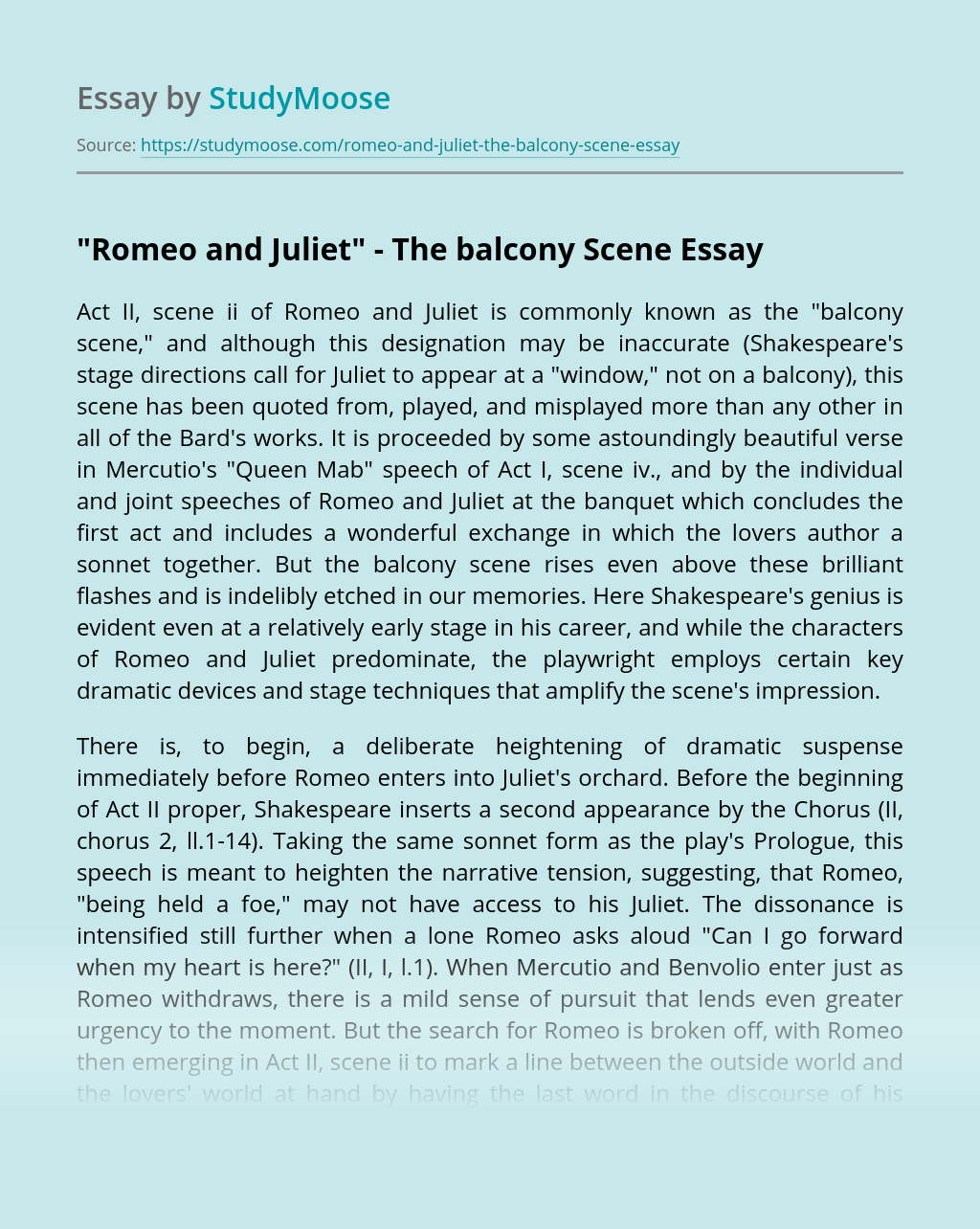 Hasty Decisions in Romeo and Juliet

The tragic tale of Romeo and Juliet hosts a plethora of hastily made decisions. As ill-fated as the two star-crossed lovers may have been, the root of all their problems can be traced back to their rash decisions. The reason Romeo and Juliet meet in the first place is because Romeo and Benvolio decide on...

View sample
Being Rebellious Gains Nothing: Romeo and Juliet

In Romeo and Juliet by William Shakespeare, there are occurrences that cause the two lovers to rebel against various things which can prove disastrous in the end. Romeo and Juliet is a play where two lovers are caught in the middle of family feuds and even though they have to sneak around, they will stop...

View sample
Get Essay
How does Shakespeare present love and hate

Shakespeare wrote the play of two lovers’, Romeo and Juliet. Thought to be, one of the greatest, tragic love stories of all time, however, throughout the play, Shakespeare contrasts love with hate at every possible moment. The two themes, love and hate, are like twins separated at birth, brought up in different backgrounds, a totally...