Romanticism in "The Scarlet Letter"

A Scarlet RomanceIt is the year 1644, Boston Massachusetts, and the stage is set for one of the most famous romance novels of our time. The Scarlet Letter, by Nathaniel Hawthorne set a genre standard for American Romanticism, with an intrinsic love of nature, sense of freedom of imagination and emotion, and the low regard Hawthorne holds for organized religion and all that it entails. In his novel, Hawthorne builds on the standards of romanticism, as the trend away from Puritanism and religious Oligarchy.

Don't use plagiarized sources. Get your custom essay on
“ Romanticism in “The Scarlet Letter” ”
Get custom paper
NEW! smart matching with writer

One of the essential, driving elements to Hawthorne’s Scarlet Letter, is the deeply rooted romantic value associated with Nature, with all of its innocence and Purity. Thought the novel, it becomes evident what poor and corrupt people the puritans of New England are, but countering the degradation of the Puritan Oligarchy, is the glorifying of Nature and all things associated with it.

An essential element of classical romance, is nature, natures purity, and finding truth in nature.

Specifically we can see Hawthorne making the connection to nature through Pearl, who’s name even has a natural meaning, being a thing of great beauty. Furthermore, Pearl seems to be naturally innocent and has a seemingly supernatural connection to nature, as we see her growing up as “an elf-child” in her childhood cottage in a meadow. This simple fact, that her haven, is outside town and in a forest, as well as Hawthorne’s grim view of the town, shows his value placed on nature as a romantic element.

Still yet, Hawthorne uses nature as his stage, highlighting Pearl, the innocent and pure, in oerpetual sunlight. Thus Hawthorne uses the classical romance element of nature to build the innocence and purity of virtue that a romance novel is always based on .

The sense of innocence and purity established through the symbolism of nature, is furthered Though the use of original emotion and imagination. Though out the Scarlet Letter, characters are either involved in mindless Puritan Worship and “reasoning” or original emotion and imagination. Thought the novel Hawthorne uses the plot and various context clues to show us what he thinks of Puritan values and lack of original thought. The characters, must choose a path, following and accepting Puritanism, or a path of their own design, of free thought and flowing emotions. In the end, the characters of Pearl and Hester are the most notable Romantic thinkers, and both enjoy a favorable future.

However some other characters such as Chillingworth, are condemned to follow the Puritan ideals blindly, and it leads to a hypocritical death and evilness. Furthermore, certain aspects of the entire Puritan machine are held in a negative light, from the Minister, who is ironically confused for Satan, and the entire city, when it is described that the road into town, out of the forest, was a gloomy one. Yet again we can see Hawthorne’s support of his romantic genre in the Scarlet Letter.

In Hawthorne’s condemnation of the Puritan society, is another strong argument of romanticism. Hawthorne continually condemns the puritans lack of personal responsibility and independence, which go against the romantic ideal of one finding a independent, personal meaning to their life. The puritan society is continually held by Hawthorne in low regard, as he degrades their actions, from the hypocrisy of their judgment, to their single-track minded view of the world.

Thus, Hawthorne’s The Scarlet Letter is a true romance novel, as he builds it upon the foundations and principles of romanticism. From the deep rooted love of nature, to the encouragement and value placed in original and free thought, to emotional liberation, Hawthorne’s novel is a standard classic of the genre.

The Scarlet Letter by Nathaniel Hawthorne

Romanticism in "The Scarlet Letter". (2016, Jul 06). Retrieved from https://studymoose.com/romanticism-in-the-scarlet-letter-essay 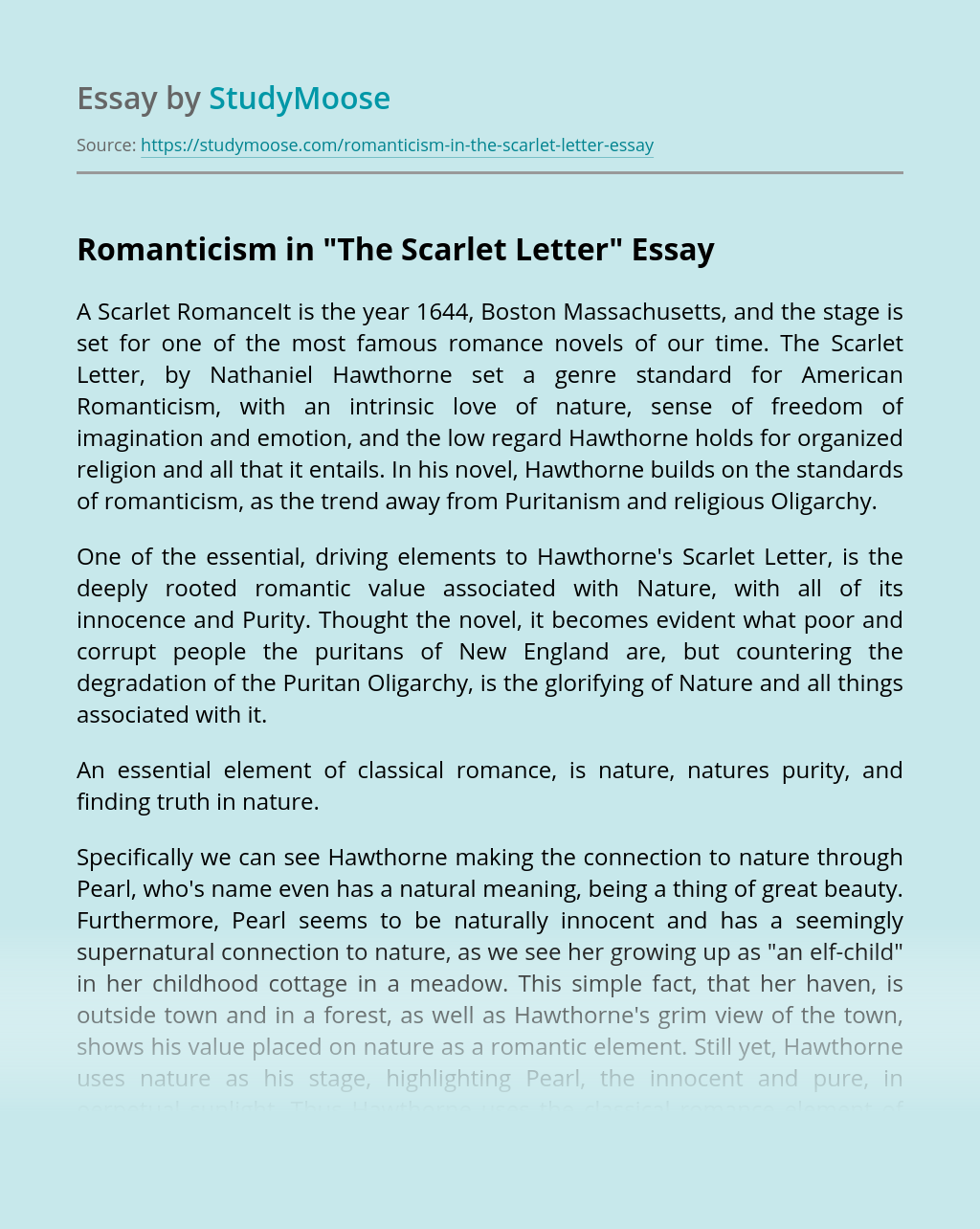