Role of Transportation in Indian Economy

India’s transport sector is large and diverse; it caters to the needs of 1.1 billion people. In 2007, the sector contributed about 5.5 percent to the nation’s GDP, with road transportation contributing the lion’s share.

Good physical connectivity in the urban and rural areas is essential for economic growth. Since the early 1990s, India’s growing economy has witnessed a rise in demand for transport infrastructure and services.

However, the sector has not been able to keep pace with rising demand and is proving to be a drag on the economy.

Don't use plagiarized sources. Get your custom essay on
“ Role of Transportation in Indian Economy ”
Get custom paper
NEW! smart matching with writer

Major improvements in the sector are required to support the country’s continued economic growth and to reduce poverty.

Railways. Indian Railways is one of the largest railways under single management. It carries some 17 million passengers and 2 million tonnes of freight a day in year 2007 and is one of the world’s largest employers. The railways play a leading role in carrying passengers and cargo across India’s vast territory.

However, most of its major corridors have capacity constraint requiring capacity enhancement plans.

Roads. Roads are the dominant mode of transportation in India today. They carry almost 90 percent of the country’s passenger traffic and 65 percent of its freight. The density of India’s highway network — at 0.66 km of highway per square kilometer of land – is similar to that of the United States (0.65) and much greater than China’s (0.16) or Brazil’s (0.20). However, most highways in India are narrow and congested with poor surface quality, and 40 percent of India’s villages do not have access to all-weather roads.

Rural Roads- A Lifeline for Villages in India: Connecting Hinterland to Social Services and markets Ports. India has 12 major and 187 minor and intermediate ports along its more than 7500 km long coastline. These ports serve the country’s growing foreign trade in petroleum products, iron ore, and coal, as well as the increasing movement of containers. Inland water transportation remains largely undeveloped despite India’s 14,000 kilometers of navigable rivers and canals.

Aviation. India has 125 airports, including 11 international airports. TIndian airports handled 96 million passengers and 1.5 million tonnes of cargo in year 2006-2007, an increase of 31.4% for passenger and 10.6% for cargo traffic over previous year. The dramatic increase in air traffic for both passengers and cargo in recent years has placed a heavy strain on the country’s major airports. Passenger traffic is projected to cross 100 million and cargo to cross 3.3 million tonnes by year 2010.

Transport infrastructure in India is better developed in the southern and southwestern parts of the country.

The major challenges facing the sector are:

India’s roads are congested and of poor quality. Lane capacity is low – most national highways are two lanes or less. A quarter of all India’s highways are congested. Many roads are of poor quality and road maintenance remains under-funded – only around one-third of maintenance needs are met. This leads to the deterioration of roads and high transport costs for users. Rural areas have poor access. Roads are significant for the development of the rural areas – home to almost 70 percent of India’s population. Although the rural road network is extensive, some 33 percent of India’s villages do not have access to all-weather roads and remain cut off during the monsoon season. The problem is more acute in India’s northern and northeastern states which are poorly linked to the country’s major economic centers. The railways are facing severe capacity constraints. All the country’s high-density rail corridors face severe capacity constraints.

Also, freight transportation costs by rail are much higher than in most countries as freight tariffs in India have been kept high to subsidize passenger traffic. Urban centres are severely congested. In Mumbai, Delhi and other metropolitan centers, roads are often severly congested during the rush hours. The dramatic growth in vehicle ownership during the past decade – has reduced rush hour speeds especially in the central areas of major cities. Ports are congested and inefficient. Port traffic has more than doubled during the 1990s, touching 650 million tons in 2006-07. This is expected to grow further to about 900 million tons by 2011-12. India’s ports need to significantly ramp up their capacity and efficiency to meet this surging demand. Airport infrastructure is strained. Air traffic has been growing rapidly leading to severe strain on infrastructure at major airports, especially in the Delhi and Mumbai airports which account for more than 40 percent of nation’s air traffic.

India’s Eleventh Five Year Plan identifies various deficits in transport sector which include inadequate roads/highways, old technology, saturated routes and slow speed on railways, inadequate berths and rail/road connectivity at ports and inadequate runways, aircraft handling capacity, parking space and terminal building at airports. Government aims to modernize, expand, and integrate the country’s transport services. It also seeks to mobilize resources for this purpose and to gradually shift the role of government from that of a producer to an enabler. In recent years, the Government has made substantial efforts to tackle the sector’s shortcomings and to reform its transport institutions. These include: Increasing public funding for transportation in its Five Year Plans. Launching the ambitious National Highway Development Program which has seven phases and is expected to be completed by 2012. It includes improved connectivity between Delhi, Mumbai, Chennai and Kolkata, popularly called the Golden Quadrilateral, in the first phase, North- South and East- West corridors in phase two, four laning of more than 12,000 km in phase three, two laning of 20,000km and six laning of 6,500 km respectively in phase four and five, development of 1,000km of expressway in phase six and other important highway projects in phase seven.

Total expected investment is INR 2.2 trillion. Accelerated Road Development Program for the North East Region to provide road connectivity to all State capitals and district headquarters in the region. Financing the development and maintenance of roads by creating a Central Road Fund (CRF) through an earmarked tax on diesel and petrol. Operationalising the National Highway Authority of India (NHAI) to act as an infrastructure procurer and not just provider. Improving rural access by launching the Pradhan Mantri Gram Sadak Yojana (Prime Minister’s Rural Roads Program). Reducing the congestion on rail corridors along the highly trafficked Golden Quadrilateral and improving port connectivity by launching the National Rail Vikas Yojana (National Railway Development Program)

The development of two Dedicated Freight Corridors from Mumbai to Delhi and Ludhiana to Dankuni. Improving urban transport under Jawaharlal Nehru National Urban Renewal Mission (JNNURM). Upgrading infrastructure and connectivity in the country’s twelve major ports by initiating the National Maritime Development Program (NMDP). Privatization and expansion of the Mumbai and New Delhi Airports and development of new international airports at Hyderabad and Bangalore. Enhancing sector capacity and improving efficiencies through clear policy directive for greater private sector participation. Large parts of the NHDP and NMDP are to be executed through public private partnerships (PPP).

Role of Transportation in Indian Economy. (2016, Oct 06). Retrieved from https://studymoose.com/role-of-transportation-in-indian-economy-essay 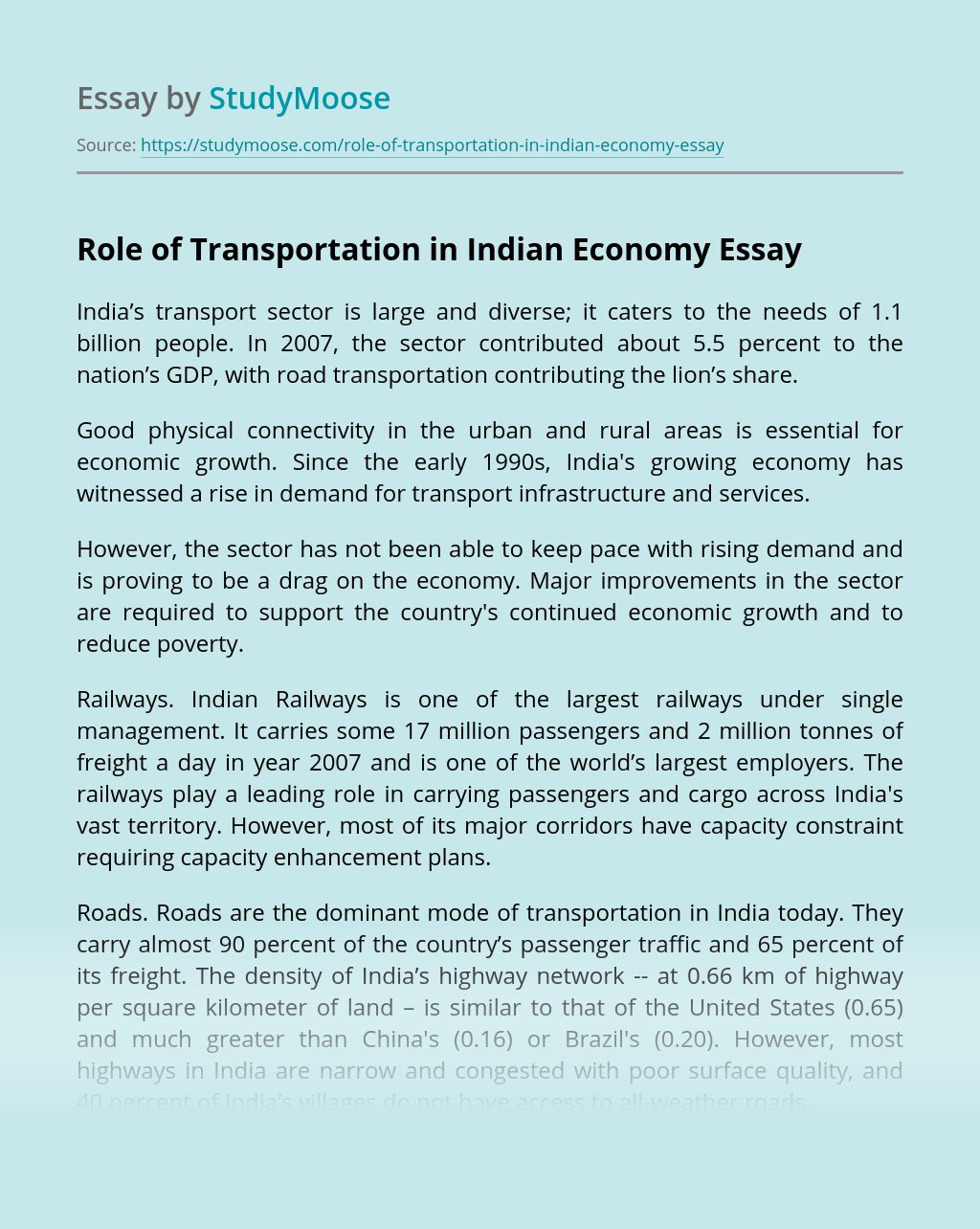