Role of Transport on Tourism

* Refers to the ease of movement of passengers, freight or information. Transportation and travel cannot be discussed without taking tourism into Consideration, but tourism cannot thrive without travel. Transportation is an integral part of the tourism industry. It is largely due to the improvement of transportation that tourism has expanded.

Turn in your highest-quality paper
Get a qualified writer to help you with
“ Role of Transport on Tourism ”
Get high-quality paper
NEW! AI matching with writer

INTRODUCTION
Transportation links the various destinations and ferries people, goods, and services. Tourism is all about travel; and the role of transportation in its operation is vital. It is largely due to the improvement of transportation that tourism has expanded. The advent of flight has shrunk the world, and the motor vehicle has made travel to anywhere possible. This reality coupled with changing work patterns and innovative marketing has driven international mass tourism through the years.

Culpan (1987, p 546) identified transportation modes and management as the “important ingredients of the international tourism system,” acknowledging that linkage by air, sea and land modes is essential for the operations as well as the availability of support services such as fuel stations, auto repair, motels and rest facilities for land travel.

Transport to various destinations in Zimbabwe is mainly by road, air and in
some cases water.

Transport has played the following roles in tourism:

Also transfers within the destination is am major factor of transport and the transfers back to the their respective source regions. Thus a lot of grounds handling companies have been established in Zimbabwe to manage Transport for tourism purposes. Page and Lumsdon (2004) contend that the transportation system of a tourist destination has an impact on the tourism experience which explains how people travel and why they choose different forms of holiday, destination, and transport.

The improvement in transportation modes plus low fares has increased the accessibility of areas once considered off-the-beaten-path. Access to tourism sites vary according to the nature of the site, the state of infrastructure, and the efficiency of the public transportation system.

Transport creates valuable links between regions and economic activities, between people and the rest of the world. This makes the destination easily accessible by different modes of transportation. For example Zimbabwe can be accessed through air, rail and road travel or by ferry from points like Kazungula in Zambia or across the Zambezi River also from Zambia.

Social role.
The development of transportation systems for tourism has a social impact on the social services of the destination as the transport modes facilitate access to healthcare, welfare, and cultural or artistic events, thus performing a social service. They shape social interactions by favouring the mobility of people. Transportation thus support and may even shape social structures.

Drives or slows economic growth
Transport facilitates major investments in tourism as a good transportation system attracts investments at the destination such as the building of hotels and other ancillary services at the destination such as shopping malls, world class hospitals and support services. Also a poor transport system can inhibit the growth of tourism as seen in the demise of Air Zimbabwe which led to a rise in cost to travel to Zimbabwe as tourists had to pay more in air tickets as there were no direct flights into Zimbabwe.

Also the pull out of major airlines flying into Zimbabwe lead to a decline in tourism, with major airlines shifting focus to destinations such as Livingstone in Zambia which now has a good transport system and it saw a rise in tourist arrivals as there was relative ease of access.

Degradation of the environment
Transport has made even remote places accessible and this has lead to once pristine places being developed into tourist facilities utilising vast tracts of land. This has polluted the land and the air, in Victoria Falls a large area of land has been turned into a dump site for refuse being churned out by the tourism industry in that area.

Commercialisation of culture
Accessibility has broken barriers and through this various cultural rights are now marketed as tourist attractions such as the Reed Dance in Swaziland and are not scared as in historical times.

Liberisation of the tourism industry
Transport has led to the Liberisation of some sectors of the tourism industry such as the airline industry which has seen many players enter the sector the sector and break the monopoly of the Air Zimbabwe as the only player in the airline business. Also the monopoly of ZUPCO has been broken as such that private players now play a major part in the transportation of tourists and this has led to an innovative spirit by private players launching unique products in the transportation of tourists to resort centres. For example the rise of City link and Pathfinder Coaches and their major role in travel for tourists in Zimbabwe.

Promotes infrastructure development
The need for a better transportation stimulates the development of infrastructure to cater for both tourism and the local community such as the expansion of the airports in Harare, Bulawayo and Victoria Falls.

The State of Transport in Zimbabwe and how it should be.

The Government of Zimbabwe is investing heavily in transport systems in the country and this is seen by the upgrading of roads in partnership with the private sector. The major highways of Zimbabwe are being refurbished by the Zimbabwe road Agency and Group Five of South Africa through the improving of existing roads.

The country still has a very poor internal air transport system as Air Zimbabwe is incapacitated due to old air craft and perceived non performance in its duties as a major component of tourism in Zimbabwe.

But the airline is on the rebound as seen by the acquisition of new aircraft to service the domestic routes between Harare, Bulawayo and Victoria Falls. Private players like Solenta air service destinations like Hwange and Kariba but these are charter airlines which make the transportation component very expensive and inaccessible by the average tourist and making such destinations inaccessible by the tourists.

Also the lack of a reliable coach service coupled with a poor road network to areas such as Gonarezhou and Tuli national parks affects the access of the by tourists to such areas and thus inhibit the growth of tourism in
these areas.

A reliable coach service between Harare and Victoria falls has led to upsurge in tourists’ numbers to the resort town in the backdrop of the demise of Air Zimbabwe and this has provided the trade with a reliable transportation to the resort town.

Recommendations
The government should fully capitalise the national airline, Air Zimbabwe as it provides a feeder service to the various tourist destinations in Zimbabwe .The airline is unable to provide a service to the tourism industry because of various operational challenges it is facing. New players in the airline business should be licensed to provide healthy completion and develop new route in now otherwise subserviced such as Buffalo Range for easy access to Masvingo and national parks in the Low-veld of the country.

The dualisation of major highways needs to be done to ease congestion and accidents and increase the flow of traffic into tourist destinations. Conclusion

Travelling has and will always be an important aspect of any given society. The explorers travel to experience new fronts in term of geographical regions, to look for new markets and also to exploit resources. Tourism as monetary activity is characterized by high levels of flexibility. Since transport costs are significant factors affecting international transportation, demand is strongly affected by the fluctuations of costs. Therefore we can say that transport is the chief element in the tourism industry. The improved transport facilities have stimulated tourism and in turn the expansion of tourism industry has stimulated transport.

Accessibility is the principal function behind the fundamentals of tourism industry. Air transport plays a dominant role in the inter-regional transport movement of tourists that entails movement over long distances. Growth rates of global air traffic are attached with those of international tourism. Tourism being dependent on travel services means that travel flows should be designed in a way to accommodate tourism. In fact this should be given priority considering that tourism is increasingly becoming a leading
income generating activity for the government in many countries today.

Whole communities within African and European regions are depending directly or indirectly on tourism activities like the drivers, hoteliers, sculptors among others, thus their lives are linked to tourism development. The government of any given country for instance should begin by decongesting the tourism traffic flow pathways like paving roads, traffic decongestion on roads, quick issuance of travel documents and quick clearance at the airport. Furthermore competitions among developing countries for tourism will be an integral of the improvement in transport sector. A country with a good transport infrastructure will compete favorably with others and vice versa. References

Role of Transport on Tourism. (2016, Mar 28). Retrieved from https://studymoose.com/role-of-transport-on-tourism-essay 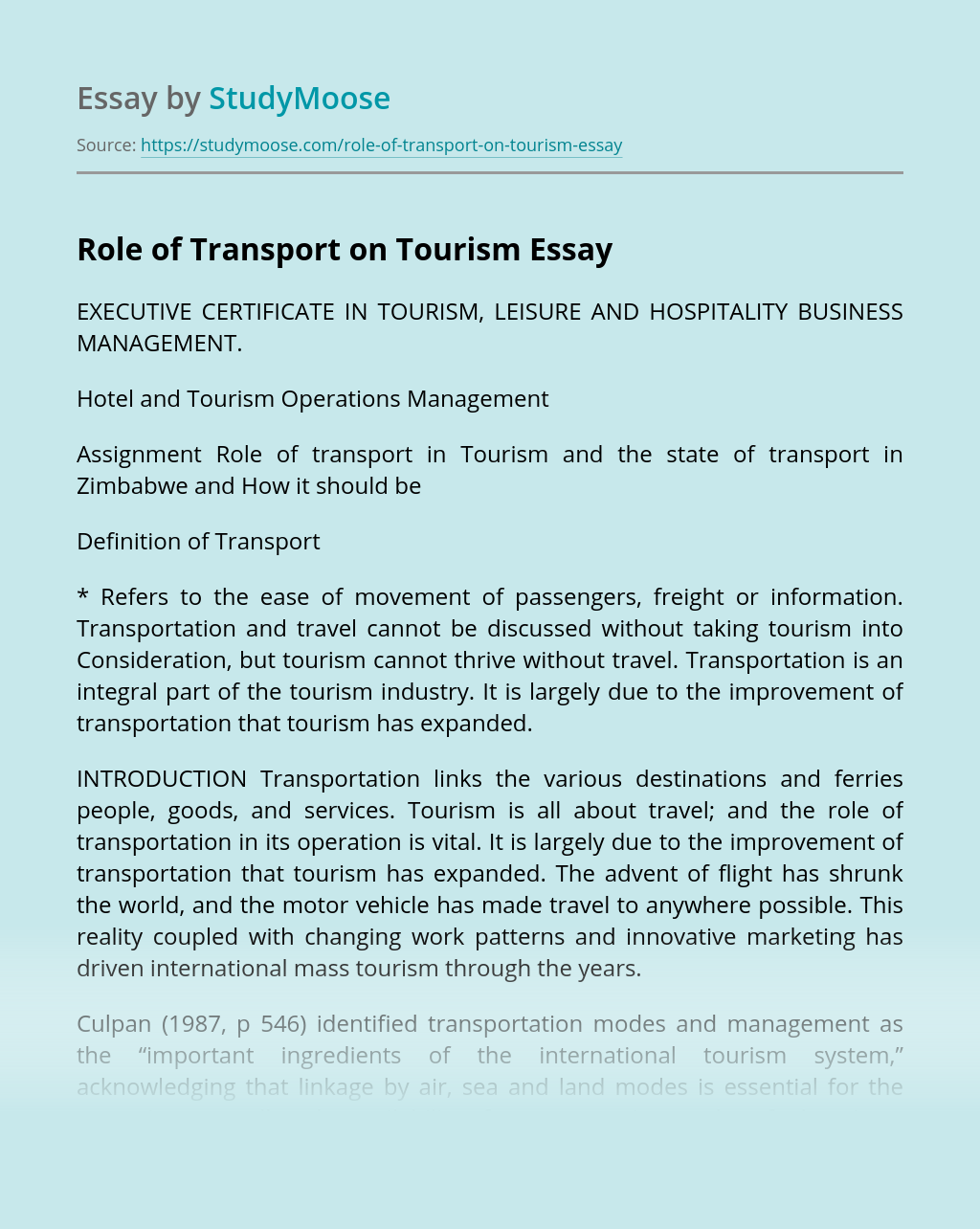 Turn in your highest-quality paper
Get a qualified writer to help you with
“ Role of Transport on Tourism ”
Get high-quality paper
Helping students since 2015
Stay Safe, Stay Original