Roe Through the Chain of Command

President Johnson implemented the Rules of Engagement (ROE) during the war in Vietnam, particularly Southeast Asia. His intention for this set of rules was a means of control. The ROE dictated who (of the enemy) and where the American troops were allowed to attack, even if they were clearly within enemy reach. This set of rules benefited the hierarchy in the Chain of Command, but had a much less desirable effect on those who actually carried out the rules. This paper will explore the ROE and how it affected the military through the Chain of Command.

Don't use plagiarized sources. Get your custom essay on
“ Roe Through the Chain of Command ”
Get custom paper
NEW! smart matching with writer

Soldiers were limited in their ability to defend. The ROE paralyzed them from shooting even when they were shot at because the rules stated they must be certain their target is the enemy and not terrified civilians. They were only allowed to attack other soldiers and/or those dressed in combat gear with weapons (Moss, 2010). This negatively impacted the soldiers’ will to fight because they felt the ROE were not in place to protect them but to enforce political policy.

Their requests were ignored.

The ROE limited the commanders from utilizing their sophisticated weaponry and equipment to its fullest capability. The Division commanders were considered experts in the military. However, their expertise was disregarded and ignored by the President. The Division commander would instruct and guide their soldiers to carry out well planned attack strategies but were often overridden by those higher up in command based on the ROE. What made sense to the Division commander was secondary to the restrictions of the ROE.

The commanders were able to increase and add to the ROE but they were not allowed to reduce the rules or bend the rules in any way (Moss, 2010). The Division Commander was faced with great difficulty of knowing the enemy was at an advantage due to the ROE because their goal was to defeat the enemy. It seems the ROE had a different goal. In 1967, Gen William Westmoreland initiated his war of attrition in hopes of victory. Westmoreland requested 2000,000 additional troops to expand the military against the VC/NVA forces, among other requests. President Johnson denied these requests.

President Johnson only approved 55,000 additional troops (moss, 2010, p. 216). General Westmoreland was one of the commanders whose expertise was ignored and overridden by President Johnson and Secretary McNamara. He was forced to give Americans false information on the US status of the war; this was demeaning to his professionalism. The department of Defense was responsible for informing Vietnam troops of ROE’s implementations and changes. Secretary of Defense Robert McNamara delegated to the Joint Chief of Staff to provide the commanders with the rules.

Debates were held when changes to the ROE occurred and Secretary McNamara was often the mediator who settled those debates. Again, during these debates, military advise from experts was often ignored (Drake, 1992 p. 9). It became apparent that the purpose of the ROE was to continue protecting decision makers President Johnson and Secretary McNamara. President Lyndon Johnson initiated the ROE’s in avoidance of the Soviet Union and China interferences.

The ROE’s restricted the military commanders and “…played a major part in the failure of U. S air power in this singular black mark on the record of American military aviation” (Dorschel, 1995, para. 1). President Johnson was hopeful that the ROE would be effective in controlling the temperament of the war. He was also using this limited war tactic to win votes during the 1964 elections. “The new president (Johnson) also feared that the injection of U. S. combat forces into the Vietnam War would provoke adverse reactions throughout the world and trigger uprisings of domestic opposition that could stifle his domestic reform program and cost him the 1964 presidential election (Moss, 2010 p. 122).

President Johnson was convinced the military commanders were more concerned with spending and he did not consider their expertise and professional input when decisions were made during combat. “The president and his advisors often disregarded the advice of military experts, believing that: “Generals know only two words: spend and bomb (Dorschel, 1995, para. 12). ”

It is apparent that the Rules of Engagement was used as a political tool to secure positions in office of President Johnson and General Westmoreland with disregard of preserving the integrity of soldiers, pilots, and commanders. The training nd skills of the troops were not appreciated and were completely negated by via the ROE. “Crews were forced to fly in predictable ways, fly the same routes over and over, and operate in ways that went against their training and experience. The continuous changes to the rules and the complexity of them made learning and remembering them a difficult task and the predictable nature of the campaign and the protected areas in North Vietnam caused heavy American losses. It was all but impossible to inflict the kind of damage necessary to achieve the stated goals of the offensive (Dorschel, 1995, para. 25).

Roe Through the Chain of Command. (2016, Oct 04). Retrieved from http://studymoose.com/roe-through-the-chain-of-command-essay 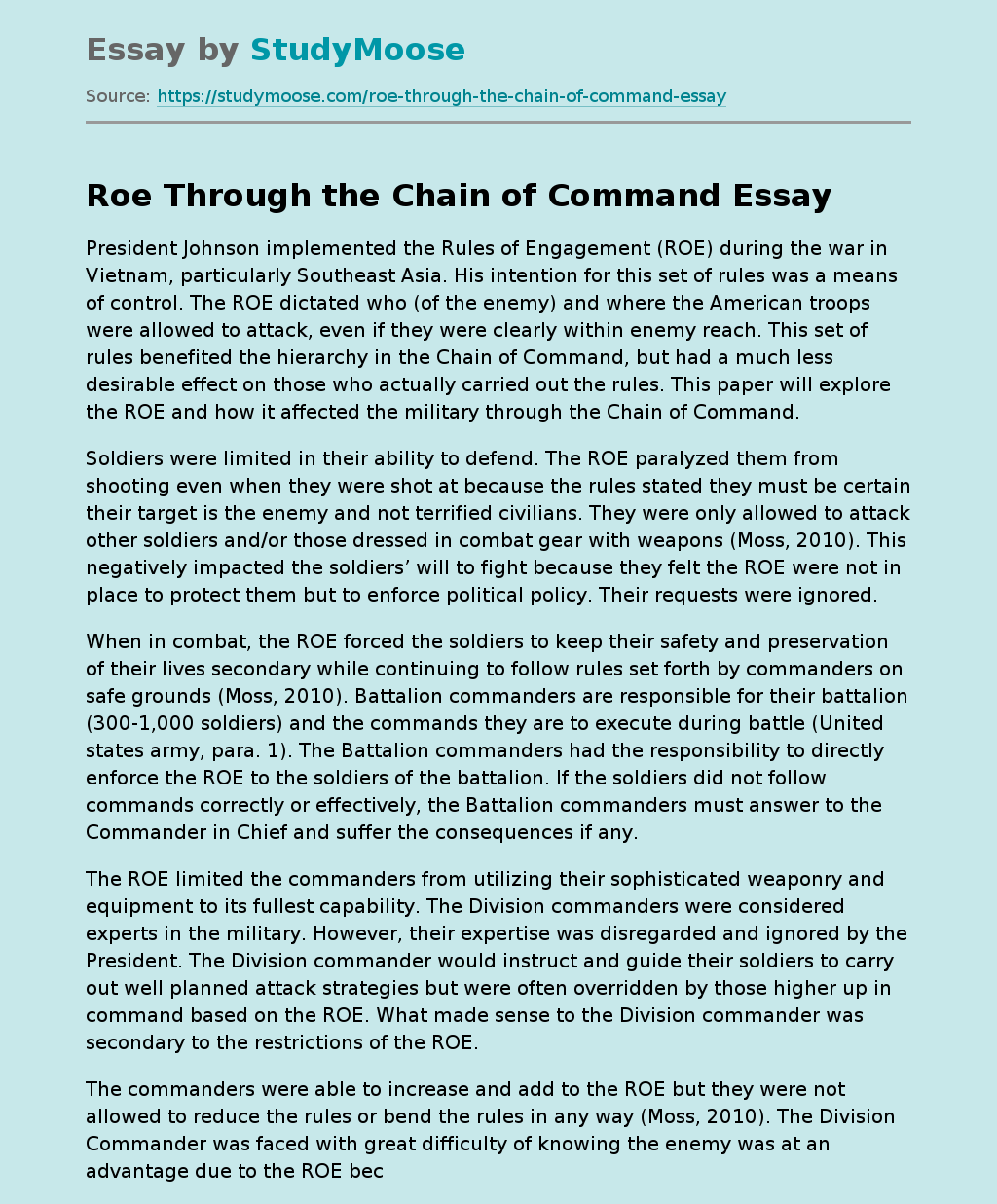